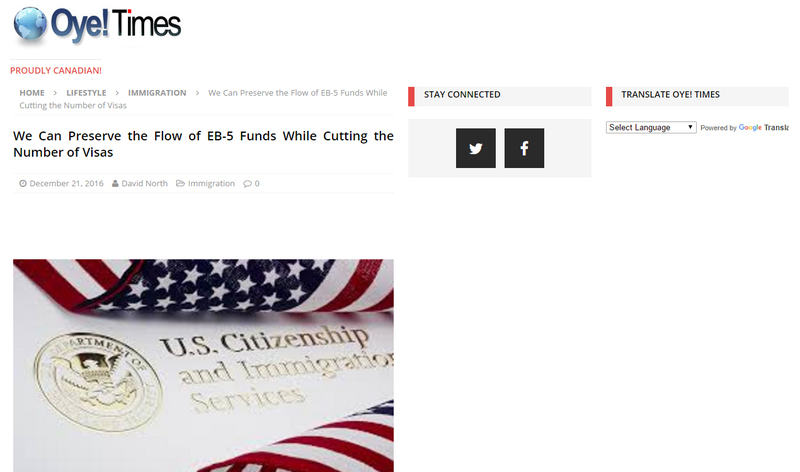 Let’s consider the amount of money that the EB-5 (immigrant investor) program raises and the number of visas needed to sustain that flow at the current rate of about $2 billion annually. Let’s do it within these contexts: A, the U.S. admits fully one million new legal migrants each year and the electorate seems reluctant to increase these numbers, to put it mildly; and B, at the same time there are forces in Congress supporting the investment program.

The key question: assuming that it is appropriate to have an EB-5 program at all (I think it should be killed) can we simultaneously continue the flow of dollars at the current rate but reduce the number of visas?

Absolutely! With a stroke of the proverbial congressional pen.

The major part of the EB-5 program has been extended by Congress to April 28 of next year. Currently this provision makes it possible for rich aliens to purchase a set of immigration visas for their families with an investment of $500,000 in a project approved by the Department of Homeland Security, but not guaranteed by the government. These investments, which are pooled, are usually used for fancy urban real estate developments; most of the investors are Chinese multi-millionaires.

Here’s the current math: There is a statutory ceiling of 10,000 visas for the EB-5 program; were the number of them to be reduced we could bring in more skilled workers without expanding overall immigration

Since the arriving investors bring, on average, a few more than 1.5 relatives with them, each investment thus equates to about 2.5 immigrants. In rounded numbers this produces about 4,000 new investments a year, bringing the annual total of EB-5 funds to about $2 billion. (That this is a drop in the national bucket of new foreign money coming to the US each year, anyway, is a fact the industry carefully avoids discussing.)

Since the half-million minimum-investment figure was set a quarter of a century ago, when the dollar was considerably more valuable than it is now, there has been considerable interest in the prospect of raising the dollar figure for the set of EB-5 visas. (EB-5 stands for the fifth category of employment-based visas the U.S. issues.)

Here are four different models of how the U.S. can continue to bring in at least $2 billion a year through this program while reducing the number of visas issued; each of these models is more attractive than the current system.

Model 1. We continue to run the current EB-5 system, questionable and wasteful as it is, but we raise the price for the set of visas to $750,000. The higher price means that we can reduce the number of visas to about 7,500 a year. That is a slightly better system than the one we have now.

Model 2. Again, we continue to run the system as it is now, but we have an auction for the EB-5 visas, with the bidding for a family-sized set of them established at a minimum of $1 million, and with the auction to be stopped when it has raised $2 billion. This would keep the same flow of funds as we have now, but reduce the number of visas to something less than 5,000, assuming that some bidders would exceed the one million minimum. This would be a considerably better system than the current one.

Model 3. This would be like Model 1 with a major difference. Instead of the EB-5 funds being, in effect, low interest loans to big-city developers, the funds would go to the government to be used to rebuild our infrastructure at no expense to the taxpayers. This would be much better than the current system, in that it would help taxpayers generally not just urban developers, and it would reduce the number of visas to 7,500 a year. The industry middlemen, of course, would scream.

Model 4. This would be the best of all: it would involve an auction, as in Model 2, but the funds would be devoted to otherwise federally funded infrastructure projects, like roads, bridges, and maybe a big fence at the southern border. The number of visas would be cut by at least 5,000.

The Trump White House should love this idea: it would be very much like the president-elect’s earlier promise that we will build a great big wall and make Mexico pay for it; it would fulfill that promise except rich Chinese would pay for it.

The industry we gather, wants no change at all, and if pushed, the minimum investment would be no more than $700,000. I have some trouble understanding why the industry would not welcome a higher dollar minimum – they are the ones that will be getting the benefit.

Given that some 40 percent of the incoming EB-5 funds are coming to Manhattan, let’s use a Broadway metaphor here. If the show is booked solid for years in advance, as the EB-5 program is, why not raise the ticket price, as the promoters of Hamilton have done?

More fundamentally, why not use the EB-5 program to benefit all of us, rather than focus on giving money, as it primarily does now, to a small circle of already prosperous New Yorkers?