Tukwila hopes new skyscraper will be 'catalyst' for growth 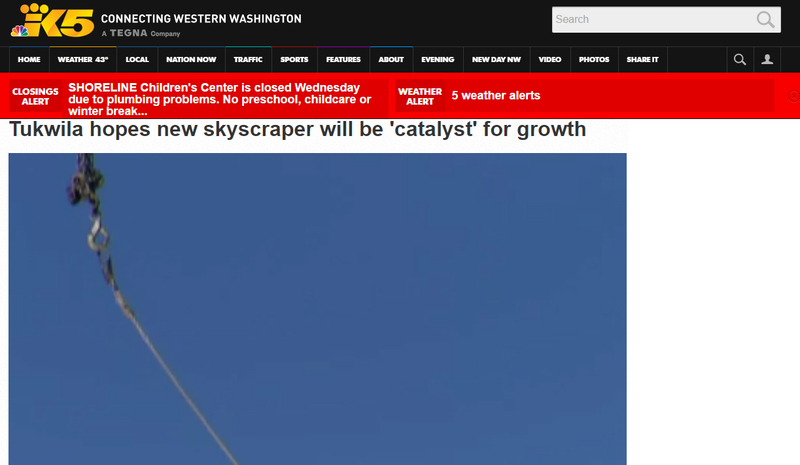 There's a huge new construction project that developers are calling the biggest skyscraper between Seattle and Tacoma.

The city of Tukwila hopes it’s new skyscraper signifies the start of big growth in the area.

It's not a bird, nor a plane, nor even Santa causing people to look into the air, but rather, what this South King County city hopes is a catalyst.

"It'll be the tallest building between Seattle and Tacoma," says Derek Speck of the City of Tukwila's Economic Development office.

Omar Lee took the elevator up at Washington Place on Tuesday to check out construction, which is underway on Andover Park East, just a couple blocks from Southcenter Mall.

"I felt the proximity to the airport, and the shopping, make this very attractive," said Lee, about the $120 million project.

The building will house 185 hotel rooms, in addition to dozens of apartments.  Lee said the financing was unusual as well.  He and his wife have put up half the cost, with the rest financed by foreign investors seeking green cards, in the program commonly referred to as EB-5.

"Instead of a conventional bank loan, we decided to finance 50% by EB-5, the rest on our own funding, and small loans, so that's something unique about this project,” Lee said.

However, the city sees it as the start of something big.

"The city has a long term vision of connecting the mall, which is down the road here, to the commuter rail, and this Baker Street is the spine," said Speck.

Tukwila is helping fund a new bike and pedestrian bridge, nearby over the Green River, which will help connect the building's occupants with the commuter rail station.  Speck estimates it’s a 10 minute walk.  He adds that the city has had a renewed interest in redevelopment near the tower.