South Florida by the numbers: Good news from 2016 (and beyond) 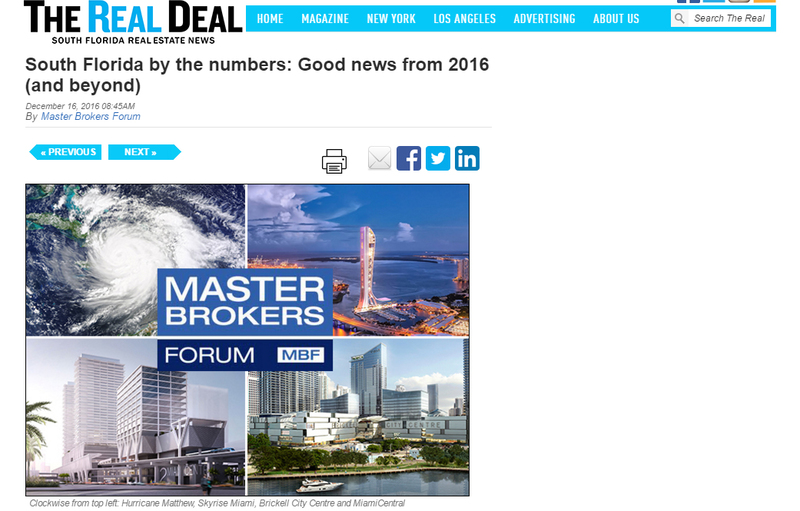 “South Florida by the numbers” is a web feature that catalogs the most notable, quirky and surprising real estate statistics.

Here at South Florida by the numbers headquarters, we are eager to flip the calendar on a challenging year for Miami real estate, American political discourse, and the horror of Pokeman Go. The world marked the passing of many notable figures over the past twelve months, such as Muhammed Ali, Prince, David Bowie, John Glenn, Gene Wilder, Glenn Frey, and Garry Shandling, while locally, the deaths of Fidel Castro, Jose Fernandez, and Janet Reno made huge impacts on our community.

We prefer to end the year with a “silver lining” kind of vibe, and tracked down some figures that highlight the good 2016 news for Miami’s real estate community, and hope for an even brighter 2017. (And beyond.) Happy Holidays and New Year from everyone at The Real Deal, the Master Brokers Forum, and South Florida by the numbers!

100 miles: Distance from South Florida maintained by Hurricane Matthew, as it tracked along Florida’s east coast in October. While some models suggested that the storm would hit the region as a deadly Category 4, a late northern shift spared us from the brunt of the hurricane.

2020: Year that the newly renovated and named Hard Rock Stadium will host Super Bowl 54, as announced in May. Team owner Stephen Ross invested nearly $500 million to renovate the stadium, which helped seal the deal for the National Football League’s decision-makers. The game will culminate the NFL’s centennial anniversary.

500,000 square feet: Size of Swire Properties’ Brickell City Centre, an extraordinary outdoor shopping center anchored by Saks Fifth Avenue and a movie theater, which opened in November. The mixed-use facility will also feature hotel, office, and residential components that have opened or are set to open soon.

$300,000: Expected raise (from $500,000 to $800,000) of the minimum investment requirement for EB-5 visa seekers, under a possible bill anticipated to pass under the new Trump administration. Just last week, the controversial program was extended by Congress until April 2017, allowing more time for a new bill to pass. The program has made a major impact in South Florida real estate, supporting development of several prominent hotel, condominium, and office projects.

70 percent: Rate completed of the Brightline’s Phase 1, which will take commuters from West Palm Beach to Miami in roughly half the time it takes to drive. The high-speed rail service is set to open in summer 2017, with the hopes of whisking travelers through the region and avoiding traffic-choked highways and roads. (A second phase, which would extend the Brightline to the Treasure Coast and Orlando, now faces an uncertain future, after the U.S. Department of Transportation withdrew approval of $1.75 billion in rail bonds.)