US continues to welcome investment immigration 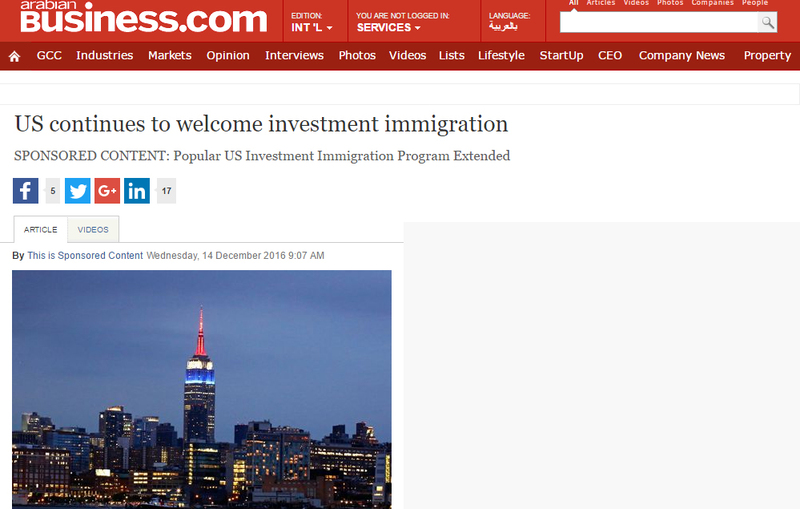 The program has strong bipartisan support and has been universally extended since enactment.

Under the EB-5 Regional Center program, 10,000 green cards are available each year to applicants investing $500,000 in Targeted Employment Areas, which create 10 permanent full-time jobs for U.S. workers. Investors qualify for Permanent Residence alongside their spouse and any unmarried children under 21.

To many, the EB-5 program is unfamiliar, but as the Middle East gains awareness, demand has surged. According to Tamer Awad, CEO of Prosper America, one of Dubai’s leading investment immigration advisories, ‘’the program is expanding in the Middle East, due to current events in the region. People are exploring other options to diversify their investments and more importantly – to secure their families.”

In China the demand for immigrant visas has led to lengthy visa backlogs for over 20,000 approved Chinese immigrant investors. Although there is currently no waiting line for residents of other countries, experts forecast other growing markets could soon be subject to the same fate.

Across the globe, entrepreneurs are immigrating to the United States to unlock new opportunities in the world’s largest economy. Companies like, FirstPathway Partners, one of the first EB-5 program managers in the region, have been a conduit for achieving the American dream. Dan Wycklendt, FirstPathway Partner’s EVP, has been assisting immigrant investors in the Middle East for almost a decade.

He attributes “Education, resources, and permanent residence for the client’s children as main motivations for immigrating to the United States.”

Investment programs offering permanent residency are available in most developed countries but as Awad explains, “The US remains the most popular. Other developed countries can require up to 3 times the investment. For many people $500,000 is a small price to secure their family’s future.’’

While the US government approves and monitors EB-5, investment immigration expert Awad is very careful when choosing prospective partners for his clients. “FirstPathway Partners has a track record for immigration approval and bringing investments full circle, these are some of the many due diligence characteristics we look access.”

According to Trump’s website, he plans to establish new immigration controls to boost wages and to ensure that open jobs are offered to American workers first. For the hundreds of thousands seeking US employment based visas each year, this spells trouble.

Amid concerns, US job creating visa program such as EB-5 have seen increasing interest among those seeking access to the United States.

“High net worth individuals are shifting from traditional employment visa applications to investment visas,” US native and EB-5 expert Wycklendt says, “When people look for a place to settle and begin a new life, there is no better way than though investment immigration.”