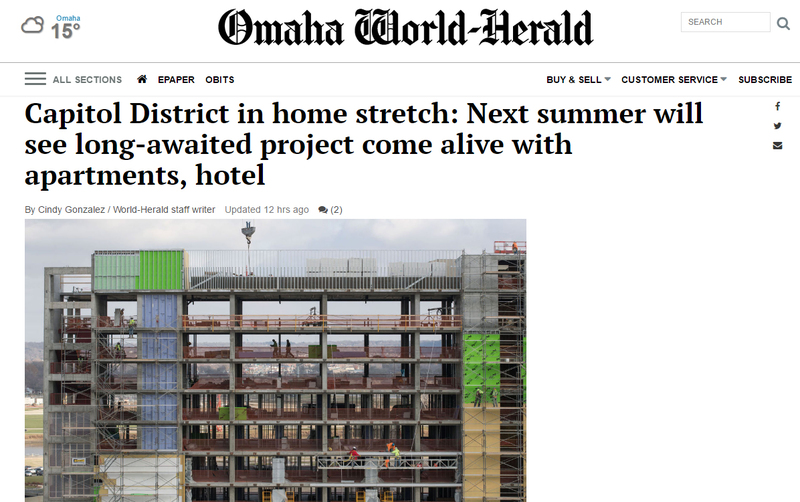 This summer, a former two-block stretch of concrete parking stalls is to come alive with apartment dwellers, hotel guests and visitors seeking entertainment at the long-awaited Capitol District project.

Five years in the making, the $205 million development’s signature 333-room hotel and 218-apartment building, each rising 12 stories, clearly is changing the landscape of downtown Omaha.

Glass and exterior pieces were being installed last week on the full-service Marriott. Showers were being lifted into the market-rate apartments.

Taking form between the two structures is an outdoor plaza about the size of a football field. People should be dining and socializing there by the 2017 College World Series, perhaps catching a baseball game on a big screen or grooving to a stage performer.

While a hotel Starbucks so far is the only secured retailer, more will occupy about 90,000 square feet of entertainment-related retail space planned on the site north of Capitol Avenue between 10th and 12th Streets.

“This is something that doesn’t get done every day in Omaha,” Moylan said. “It’s come together well; we’re excited.”

Indeed, the initiative is close enough to the finish line that developers gave The World-Herald an inside look and tour.

From the top of the apartments, Moylan gazed around and said the project stands out not only as a destination dining and entertainment place but as a link between other hotspots.

To the east is the CenturyLink Center; to the north is TD Ameritrade Park; to the south and west are employer hubs.

“We’re in the middle of where everybody wants to come or already is coming,” he said.

Five years in the making, the $205 million development’s signature 333-room hotel and 218-apartment building, each rising 12 stories, clearly is changing the landscape of downtown Omaha. 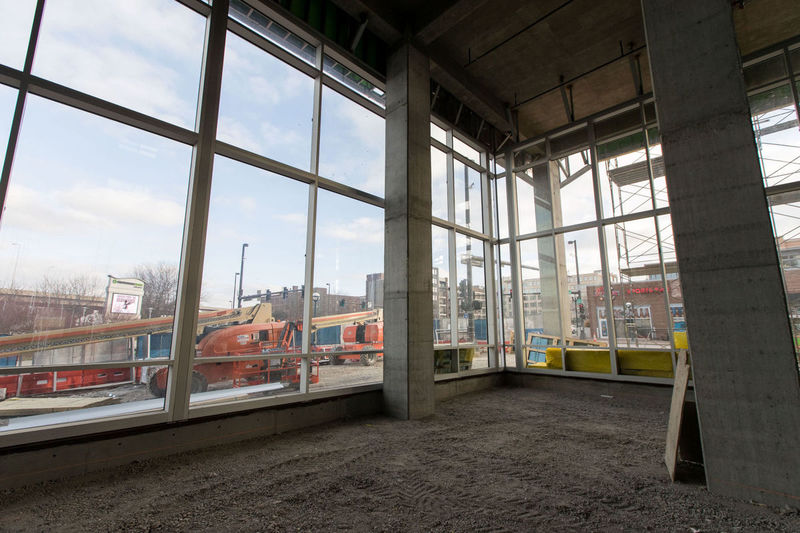 A view inside the southeast corner of the Marriott Hotel at Capitol District project. 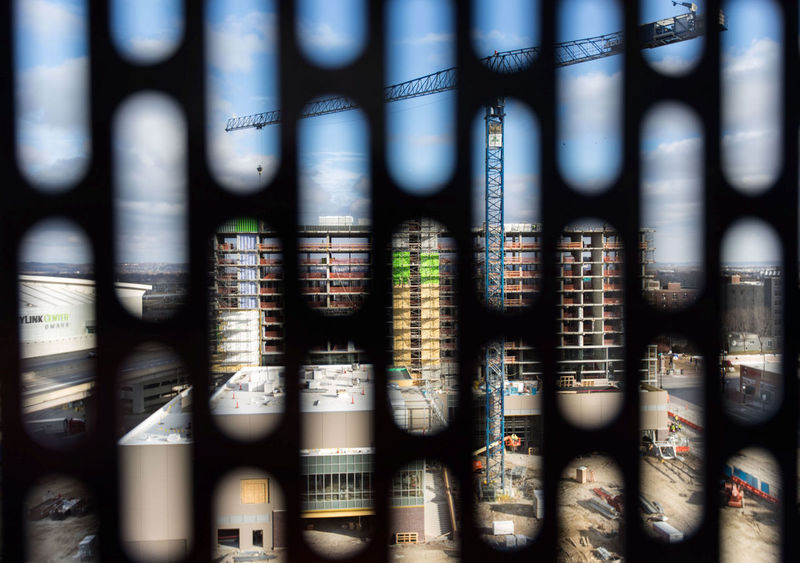 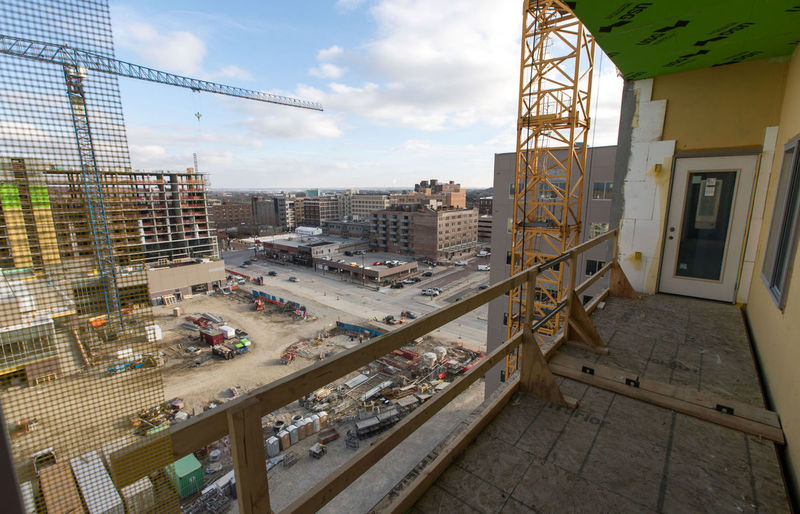 A view from the balcony of a top floor apartment under construction at the Capitol District project on Friday, Dec. 2, 2016. The Marriott hotel is in view to the left. 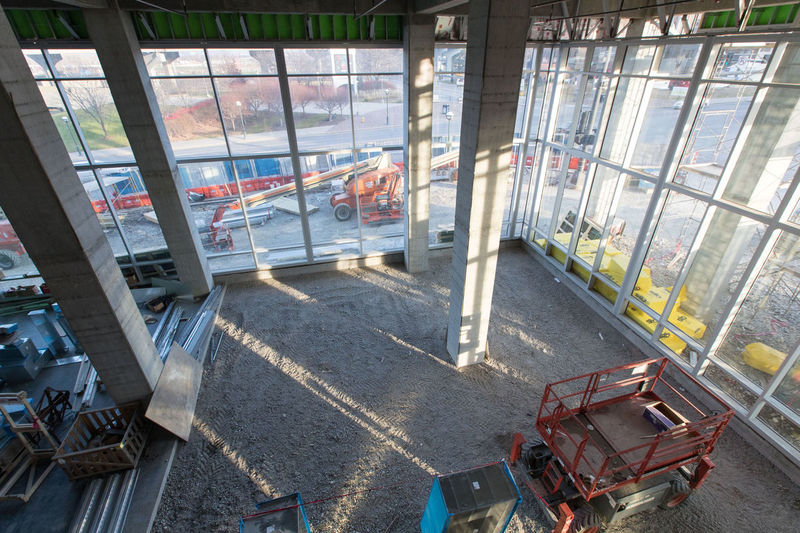 A view of the southeast corner of the Marriott Hotel at Capitol District project. 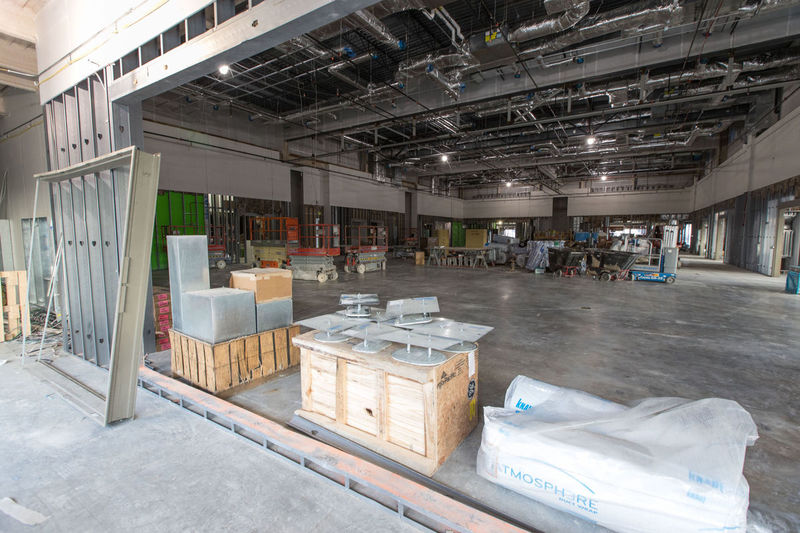 The ballroom of the Marriott Hotel at the Capitol District project.

Owners Rodrigo and Mary Lopez of AmeriSphere Properties plan to break ground next spring on what they’ll call Capitol Place. The couple plan to live on the top floor. A skating rink currently is at the site on the southeast corner of 10th and Capitol.

“It’s such an important corner for the city,” said Rodrigo Lopez. “When the land became available, we definitely jumped on the opportunity.”

Steve Sheppard of CBRE/Mega, who matches companies with office space, sees the Capitol District as another lure to bring employers downtown.

“It creates more energy, more activity, which lends itself to more office users entertaining the idea of moving downtown.”

Such energy would be welcome, as the downtown office vacancy rate recently jumped to 15 percent (up from about 8 percent earlier in the year). Factors included Conagra shrinking its local workforce and Gavilon putting a big chunk of space up for lease. Citywide, the office vacancy rate is about 12 percent.

Even before it started, the Capitol District initiative was in the public eye, as Omaha and Metropolitan Entertainment and Convention Authority officials sought proposals to transform what then was city-owned property.

They hoped to gain another convention center hotel to help Omaha compete for tourism. They also wanted to maximize the potential of prime property on the doorstep of the CenturyLink.

Moylan’s Shamrock Development company was picked in late 2011 over two competing bidders, pitching what began as a $176 million package with a 350-room Marriott, 280 apartments and space for offices and shops, all to be built by December 2014.

Shamrock at the time already had a footprint at the 10th and Capitol area, having redeveloped the 1009 Capitol Building and 1000 Dodge Building into condos and bars. The developer had started to market the neighborhood as the Capitol District.

Tough spells followed. Progress was slowed early on as the development team worked to find a hotelier willing to open a full-service facility, and to land financing.

The Shamrock team tapped local investors, traditional bank financing and up to $35 million in tax-increment financing. It also turned to Chinese investors, who contributed through a federal visa program known as EB-5. Under the program, international investors who help create jobs and development can earn U.S. green cards.

Then came a roller-coaster ride when the Omaha-based HDR engineering and architectural firm announced it would build a new corporate headquarters just south of the Capitol District project — only to switch tracks and change that spot to midtown’s Aksarben Village.

That dashed hope for hundreds of new downtown workers. Though disappointed, Moylan said his project was moving forward even before HDR’s announcement. Any adjustments to accommodate HDR parking were reversed. “We were able to switch back to our original plan,” he said.

Still in the works today is possible city approval that could make the grounds Omaha’s first entertainment district where people could openly carry alcoholic beverages in the development’s plaza, similar to Lincoln’s Haymarket district.

Moylan said his team also is refining elements of the multistory mixed-use building planned for the district’s southern edge. Another retail-focused building along the northern side will offer about 21,000 square feet on two levels, and connect via skywalk to the eight-level parking garage.

He expects no problem filling the apartments, which will open in phases next summer. He said about 75 people already have inquired, including downtown residents wanting to be closer to that area.

When it comes to downtown, Moylan said, even a block matters in choosing where to stay, because people want to be close to favorite activities.

“We are capitalizing on 15 years of investment and construction already in downtown,” he said, noting nearby attractions. “We want to take advantage of this incredible location.”

What to expect at the Capitol District project site
Covering about 5.4 acres, it’s billed as a “destination dining and entertainment district” with places to eat, drink, live, lodge and socialize — which means no soft goods or clothing shops.

Among the main elements:

Hotel: The 333-room Marriott is downtown’s first full-service hotel built since the Hilton Omaha in 2004. It features a convention center and 11,000-square-foot ballroom overlooking the outdoor plaza. Other amenities include an outdoor pool and bar, a fitness center, concierge service, signature restaurant and a Starbucks.

Apartments: The 218 units, many with individual balconies, will be atop ground-level retail space. Rent ranges are yet to be defined. Features include a fitness center, two community rooms and patio overlooking the plaza.

Plaza: Described as a town square with an “eclectic twist,” the multifunctional plaza is designed for small gatherings or events that draw up to a few thousand people. It will be surrounded by restaurants and bars, the hotel and apartments.

Parking garage: An eight-level, 505-stall structure connects to the district by two skywalks. Half the stalls will be public and the rest private.

Retail and office space: About 90,000 square feet of retail area is to wrap around the plaza, offering a mix of dining and entertainment options. A multi-story building on the south perimeter also could offer office space. Other than Starbucks, retailers have yet to be identified.

Capitol Place: Kitty-corner to the Marriott, the six-story building is to have underground parking with ground-level commercial tenants, four floors of apartments and a penthouse level. Amenities include a fitness center and balconies for each unit. Though ownership is separate from that of the Capitol District project, the owners said they chose the name to identify with the site.