EB-5 Extension Likely Until April; Plus, What’s It Cost to Create a Job? 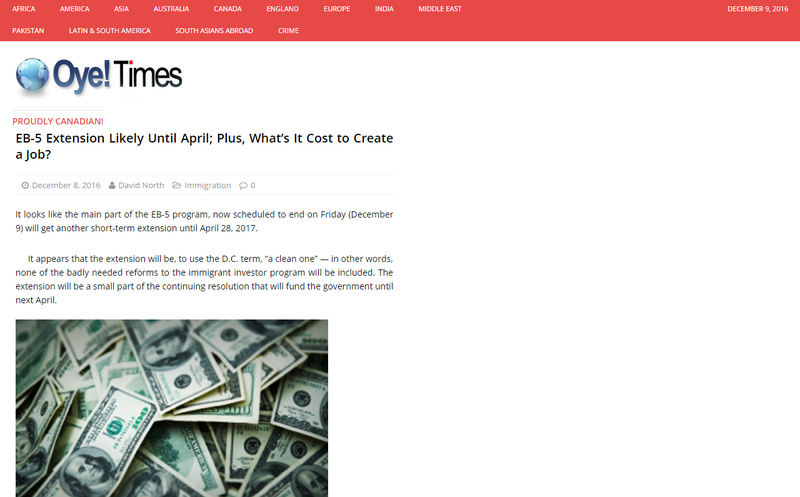 It looks like the main part of the EB-5 program, now scheduled to end on Friday (December 9) will get another short-term extension until April 28, 2017.

It appears that the extension will be, to use the D.C. term, “a clean one” — in other words, none of the badly needed reforms to the immigrant investor program will be included. The extension will be a small part of the continuing resolution that will fund the government until next April.

This is, of course, another victory for the status quo and will put the GOP Congress in the strange position of continuing a program that routinely lavishes a majority of the money raised from aliens on projects in the glitzier parts of New York City — hardly a GOP stronghold. Something like 56 percent of the funds goes to NYC, and the rest of the country gets the leftovers, as we have reported earlier.

Meanwhile, and though I am not a fan of Donald Trump’s use of numbers, something he said the other day should be kept in mind when contemplating the renewal of the EB-5 legislation. It is supposed to be a job creation program, with each $500,000 investment allegedly creating 10 jobs. That would be $50,000 each.

Meanwhile, in introducing a Japanese multi-billionaire, Masayoshi Son, Trump said that Son had promised to invest $50 billion in the United States and that it would create 50,000 jobs. Unless my math is wrong, that means that each new job would cost $1 million.

There’s a 20:1 ratio here, and I suspect that Trump and Son are closer to reality than the out-of-date EB-5 law on what it takes to create a job.

One of the many failings of the current EB-5 law is the way it allows estimation techniques on job creation to include both “induced” and “indirectly created” jobs to justify projects, thus supporting the otherwise minor job-creation achievements of the program.

To suggest that $50,000 can create a continuing, full-time job in today’s economy is a bit of folly that the EB-5 program has been nurturing for decades.