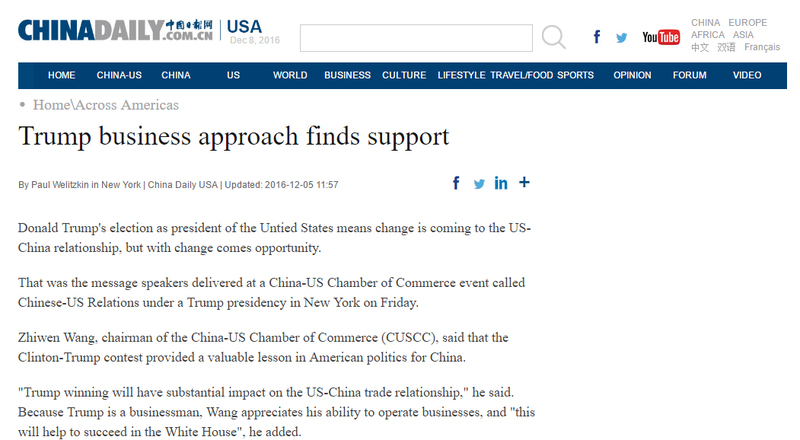 Donald Trump's election as president of the Untied States means change is coming to the US-China relationship, but with change comes opportunity.

That was the message speakers delivered at a China-US Chamber of Commerce event called Chinese-US Relations under a Trump presidency in New York on Friday.

Zhiwen Wang, chairman of the China-US Chamber of Commerce (CUSCC), said that the Clinton-Trump contest provided a valuable lesson in American politics for China.

"Trump winning will have substantial impact on the US-China trade relationship," he said. Because Trump is a businessman, Wang appreciates his ability to operate businesses, and "this will help to succeed in the White House", he added.

Wang said President Xi Jinping highly values the US-China relationship. "He believes it can be a win-win if the US and China can deliver a strategic relationship," he said.

Leslie Wolf-Creutzfledt, the president of Heinlyn Public Relations, which works closely with the CUSCC, said the election of Trump is not as bad as it may look to some for Sino-US ties.

"It will definitely be a big change, and all of us need to get ready for that change," she said.

For a clue as to how Trump will operate at the White House, Wolf-Creutzfledt pointed to his use of Twitter to bypass the traditional media to control the message during the campaign.

Andrea Charters of the Potomac Law Group said the change that is coming to the US-China relationship should help business. Trump will take a business approach to reduce regulations and grow the economy.

"Good relations with China support his business focus," said Charters, who believes that real estate will be a winning sector in the new administration.

Despite some controversial remarks about immigration by Trump during the campaign, Charters believes that the EB-5 program will thrive.

"Trump has used EB-5 himself. His immigration focus is on polices that he sees as taking away jobs in the US. EB-5 creates jobs so I think he can be expected to renew the program," she said.

EB-5, an immigrant investor program popular with the Chinese, is scheduled to expire on Friday. EB-5 was created to stimulate the US economy through job creation and capital investment by targeting foreigners who invest at least $500,000 in a project that creates a minimum of 10 jobs in an economically depressed region.

In return, the investors receive a two-year visa with a good chance of obtaining permanent residency for themselves and their families. In 2014, the US issued more than 10,000 of the visas, and about 85 percent went to applicants from China.