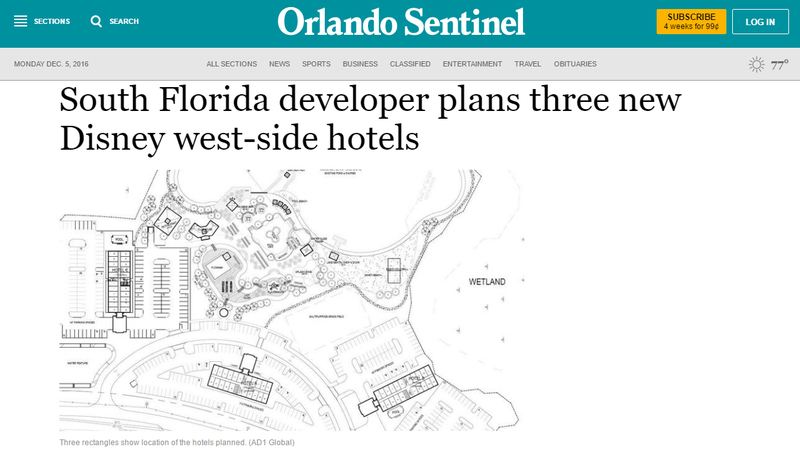 Hollywood-based AD1 Global is preparing to file plans for a 57.6-acre property at 17509 Bali Blvd., next to the Liki Tiki Resort and about 8 miles west of Disney's Animal Kingdom.

There’s no flag for the hotels yet, but AD1 is talking to “upper middle-scale” brands, said CEO Daniel Berman. He hopes to start construction in late 2017.

“The idea would be to start construction on all three at the same time,” Berman said. “It is always better to have three different reservation systems, different types of hotels, to capture more types of people. Some people want a longer stay, some shorter. Some people want more amenities, food and beverage, etc.   There will be restaurant probably in one or two of them.”

Berman says the plan is for a significant water park, possibly one large enough to be open to the public also.

AD1 is owned by three cousins from Venezuela, including Berman, Arie Fridzon and Alex Fridzon.

The property is just south of the massive Grove Resort & Spa, at 890s rooms, which is opening in stages soon. It sat vacant during the Great Recession and was recently rebranded – it was formerly the Grande Palisades. The nearby Flamingo Crossings area has also seen new construction in the past two years.

“We see growth in tourism, and continued growth at Disney and Universal,” Berman said. “We believe in the area and there’s a lot of potential.”

AD1 recently bought a hotel on International Drive and owns other properties in the Orlando area and in Florida. Berman said the company is preparing its first project outside Florida too, in Savannah, Ga.

According to county records, part of the property is submerged and part is “waste land” or a borrow pit that was used for quarry activities.