A Venezuelan-born lawyer recounts her path to U.S. citizenship, and a few lessons learned along the way 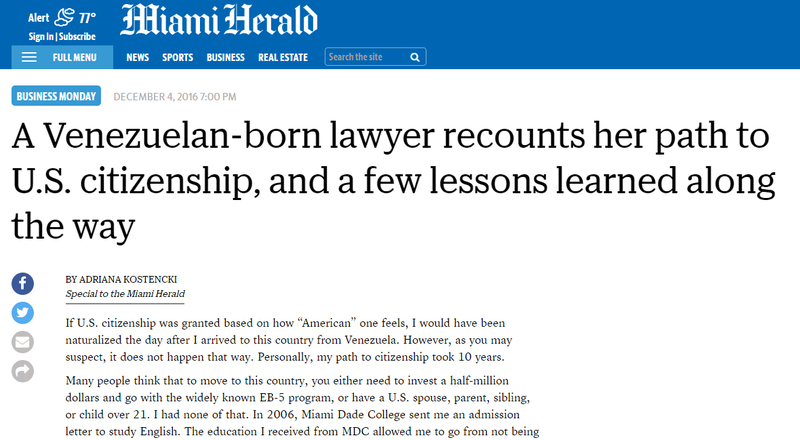 If U.S. citizenship was granted based on how “American” one feels, I would have been naturalized the day after I arrived to this country from Venezuela. However, as you may suspect, it does not happen that way. Personally, my path to citizenship took 10 years.

Many people think that to move to this country, you either need to invest a half-million dollars and go with the widely known EB-5 program, or have a U.S. spouse, parent, sibling, or child over 21. I had none of that. In 2006, Miami Dade College sent me an admission letter to study English. The education I received from MDC allowed me to go from not being able to structure more than 10 sentences in English to transferring my student visa to the University of Miami School of Law to pursue a juris doctor degree in 2008.

While pursuing my law degree, I searched for jobs and received an offer from a Florida law firm. However, I had to get a work visa before I was able to take the position. My only option at the time was for the employer to file an H-1B non-immigrant petition on my behalf.

In 2008, however, as in recent years, all petitions were required to undergo a computer-generated random selection process because the U.S. Citizenship & Immigration Services had received more than 65,000 petitions for the fiscal year. Luckily, mine made it through.

In 2010, my husband and I held advanced degrees from distinguished unversities — and also more visas than pages in our passports. Fortunately, U.S. immigration laws provide several ways for foreign professionals to file for permanent residency without having to have a U.S. family member.

For example, some can obtain their “green card” through their U.S. employer, provided that the employer has been doing business for at least one year, and the foreign national has been employed abroad continuously for one of the previous three years by a parent, branch, subsidiary or affiliate of the U.S. employer in a managerial or executive capacity.

Other individuals can obtain their permanent residency by demonstrating extraordinary ability in the sciences, arts, education, business, or athletics through sustained national or international acclaim. This is a common option for artists, professional athletes and musicians.

My husband and I pursued our path to permanent residency through a process commonly known as “Labor Certification” that allows an employer to hire a foreign worker to work permanently in the United States, provided that, among other things, there are not sufficient U.S. workers able, willing, qualified and available to accept the job opportunity.

In 2011, we received a letter from USCIS approving our U.S. permanent residencies. Finally, on Aug. 30, five years after receiving my green card, I added a new, supplementary identity to my Venezuelan nationality: I became an American citizen.

Today, I am proud to serve as a partner at Berger Singerman, where I lead the firm’s immigration practice. Every day, we represent foreign nationals and U.S. companies on their visa and work authorization needs. My advice, as an attorney and a person who went through the naturalization process, is to find proper legal assistance to navigate the immigration system. There is no one-size-fits-all visa; there are no two identical processes. To the contrary, there’s one non-immigrant visa category for almost every letter of the alphabet.

Qualifying for a green card to live in the United States can be a challenge.

The law strictly defines the categories of people eligible for green cards, and in some categories, limits the number of green cards that can be given out each year. Immigrants come in many forms, shapes, and colors, but most of us come through a U.S. family member or as professionals, managers, executives, investors, persons of extraordinary ability, trainees, or students who, like me, come to this country to work, to call it home, and to pursue the American dream. As such, it is important to seek early legal advice to avoid mistakes that may later make the foreign national ineligible for permanent residency or U.S. citizenship.

There are many other options for immigrants to become U.S. citizens other than the popular EB-5 program, and my personal journey motivated me to help others understand these options and make the immigration process more seamless. Being a new immigrant and maintaining legal status may sometimes feel burdensome, but it is possible. After all, we live in the land of opportunities.