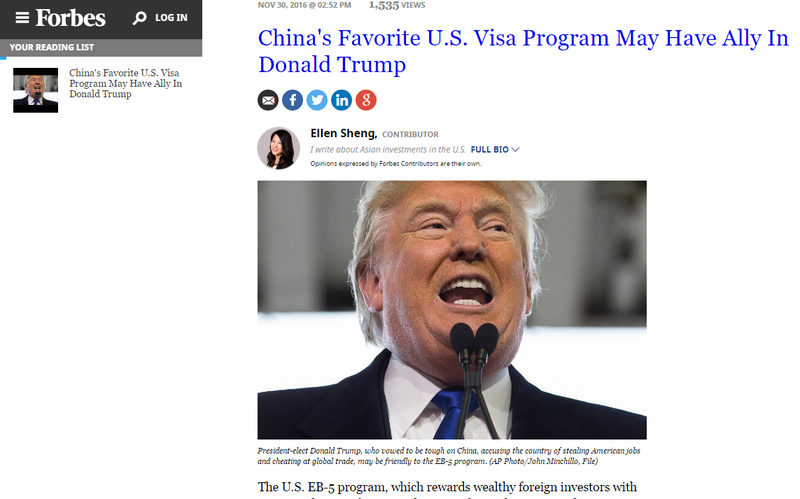 President-elect Donald Trump, who vowed to be tough on China, accusing the country of stealing American jobs and cheating at global trade, may be friendly to the EB-5 program.

The U.S. EB-5 program, which rewards wealthy foreign investors with green cards, is up for renewal next week. Washington insiders are cautiously optimistic the program will continue and have a powerful ally in President-elect Donald Trump.

The program, which has been under fire for funding luxury building projects in metropolitan areas such as such as Manhattan rather than creating jobs in rural, economically distressed areas, was up for extension last December, extended to September 30, and is now extended until December 9.

Angelique Brunner, the EB-5 Investment Coalition's industry membership chair and spokesperson, said that while "it's hard to say what Congress's priorities are right now" the EB-5 program has been extended in the past and the coalition has bipartisan support for the program and is anticipates that Congress will continue the program.

Trump has not stated a position on the EB-5 program. Despite his hard stance on immigration, calls to increase screening of immigrants, and threats to start a trade war against China, Trump is no stranger to Chinese investment or to EB-5 funds. His son-in-law Jared Kushner's rental apartment complex in Jersey City, New Jersey, named Trump Plaza, has taken in $50 million in EB-5 funds, mostly from Chinese investors.

"On the surface, Trump is a real estate guy, he's a New Yorker, he has friends and family in real estate development -- not to mention his own interests. He may not want to rock that boat too much. He also is tax averse which bodes well for EB-5 being that it is an economic development tool that comes free to the taxpayer. It's also a job creator, which is a pillar of his campaign. So, all of these elements would lead an optimist to believe that he could be good for EB-5," said Samuel Newbold, attorney at Barst Mukamal & Kleiner in New York.

Newbold noted that there has been an uptick in last minute filings from China. Some filers are trying to get their paperwork in before the program is up for renewal on December 9, while others are concerned about getting the papers in before December 23 when filing fees for U.S. Citizenship and Immigration Services rise significantly.

Created by Congress in 1990 as a means to stimulate the economy and create jobs, the program has been extended regularly since then. The minimum investment by "alien entrepreneurs" is $500,000 in a high-unemployment or rural area and $1 million elsewhere. Investment is no guarantee of citizenship and applicants must create at least 10 full-time jobs to qualify for a green card. The USCIS estimates that since 2012 at least $8.7 billion has been invested in the U.S. economy and 35,150 jobs created through the EB-5 program. The program issues a maximum of 10,000 green cards a year and 90% of applications come from China.

The program is now the most popular residency program in the world partly because of the draw of U.S. citizenship and the fact that it's considerably cheaper than similar programs in Australia, the U.K. or Canada.

Despite its successes, the EB-5 program has been criticized not only for straying from its original intent to stimulate job growth in economically blighted areas but also for not doing enough to filter out fraud. Increasingly, foreign investors who have been cheated out of their money and green cards have been fighting back and suing.

The failures have spurred a flurry of proposed legislation to increase oversight of the program, steer investment back to distressed areas and increase the investment minimum. But because the EB-5 is wrapped in with the omnibus spending bill, any changes to the program have been repeatedly pushed aside and the program extended until a later date when lawmakers hope to revisit the issue.

Though insiders in Washington are cautiously optimistic that Trump will continue the program, they caution that nothing is certain at the moment.

"I think it's probably a little bit of a fool's errand to try to make sense of Trump's word salad and what he means by his statements about China, and fraud, and currency manipulation, and economic bullying and so forth. Nobody really knows what policies he will roll out with respect to China and their potential impact on EB5. At this early stage, there is an equal chance that he will do nothing," said Newbold.