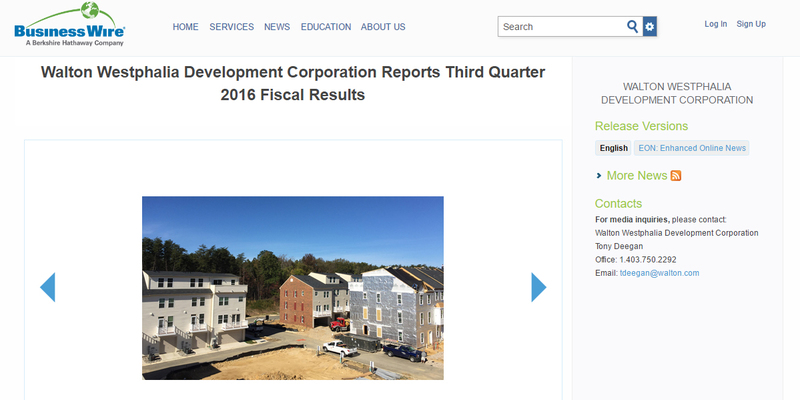 Walton Westphalia Development Corporation (the “Corporation”) announced today its results for the third quarter of 2016. Launched in March 2012, the Corporation was formed to provide investors with the opportunity to participate in the acquisition and development of the 310-acre Westphalia Property (the “Property”) located in Prince George’s County, Maryland, United States of America.

During the period ended September 30, 2016, the primary focus of the Corporation was to continue construction and financing activities, including:

Management continues to believe that by pursuing vertical development joint ventures and less expensive financing strategies as discussed herein, the Corporation can potentially achieve a higher Internal rate of return (“IRR”). These IRRs are based on, among other things, achieving certain revenue targets, maintaining construction schedules and costs, the timely receipt of recoveries, third-party sales and commitments for additional lots from the builders. Further material changes to IRR projections and the projected hold period could occur due to changes in a number of factors. 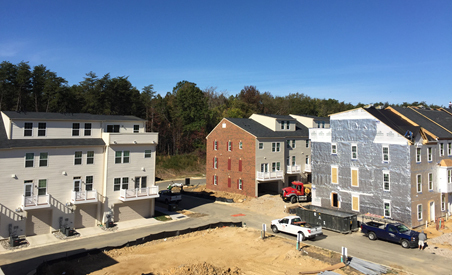 The financing strategies include pursuing programs such as the EB-5 Immigrant Investor Visa Program (“EB-5 Program”) (which has to be done in conjunction with vertical development) that could allow for lower cost financing with better flexibility, and working to finalize the legislation of our recently approved TIF to issue bonds for transportation infrastructure. Due to lender intercreditor negotiations, we have revised our projection on EB-5 proceed availability from November 2016 to March 2017.

Earlier in 2016, we submitted an application to Prince George’s County, Maryland officials for approximately $65 million in tax increment financing (TIF) bonds. On November 1, 2016, the Prince George’s County Council voted unanimously in favor of the TIF and established the Westphalia Town Center Development District and Westphalia Town Center Special Taxing District. Over the next few months, County staff and the County’s external consultants will undertake their review of, and due diligence on, the Westphalia development and the TIF financing proposal.

These two alternative financing mechanisms (EB-5 Program and TIF bonds), if successfully implemented, have the potential to decrease costs and increase the project’s IRR from the current 5.26% to the low teens. This however, cannot be assured as a number of factors may impact the IRR on this project.

As previously announced, the maturity dates of the Corporation’s senior loan and mezzanine loan had been extended to November 30, 2016 and December 5, 2016 respectively. In addition, the guarantor of the senior loan and mezzanine loan has not satisfied certain covenants to the lenders relating to minimum cash balances and minimum net worth. This could, at the option of the lenders, if not cured, constitute a potential event of default under the Senior Loan and Mezzanine Loan, which would then allow the lenders to demand immediate repayment of amounts owing by the Corporation thereunder. No notices of such non-satisfaction have been provided by the lenders.

The senior lender has advised that it has approved the extension of the senior loan to June 30, 2017 subject to certain terms and conditions. 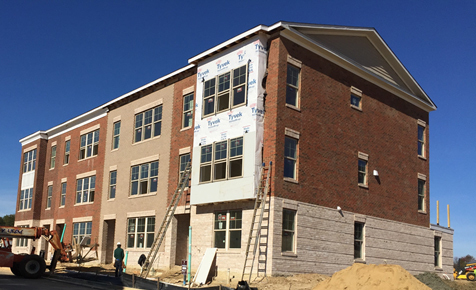 Total other expenses increased by $9,070 from $286,542 for the three months ended September 30, 2015 to $295,612 for the three months ended September 30, 2016. The increase is primarily due to an increase of $13,155 in marketing expenses, due to higher media consulting and placement costs partially offset by lower production expenses, an increase of $13,075 in director’s fees due to increased compensation paid to each independent board member. In addition, during the second quarter of 2015, there was only one independent director compared to two in 2016. These were offset by a decrease in Professional fees of $10,218 due to lower audit fees and a decrease in office and other expenses of $6,998 due to lower news filing and communication costs.

Total other expenses increased by $104,770 from $792,759 for the nine months ended September 30, 2015 to $897,529 for the nine months ended September 30, 2016. The increase is primarily due to an increase of $60,678 in marketing expenses and an increase in professional fees of $18,088 relating to additional costs incurred in 2016 with the builders’ lot takedowns. There was also an increase of $38,924 in director’s fees due to increased compensation paid to each independent board member. In addition, during the second quarter of 2015, there was only one independent director compared to two in 2016. These were offset by a reduction in office and other expenses of $13,909 due to lower news filing and communication costs.

Its communities are comprehensively designed in collaboration with local residents for the benefit of community stakeholders. Its goal is to build communities that will stand the test of time: hometowns for present and future generations.