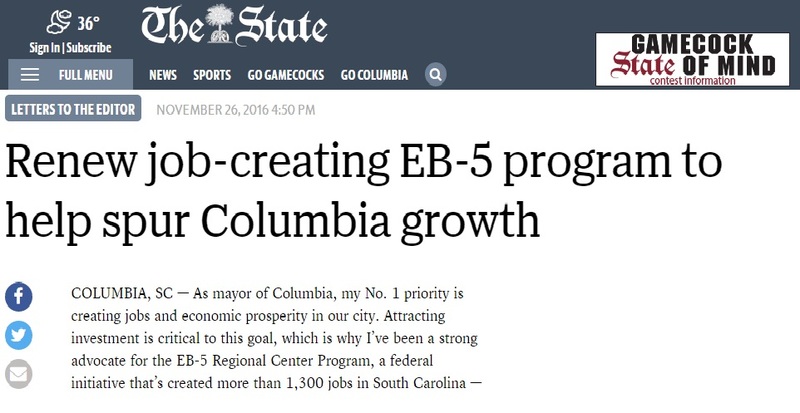 As mayor of Columbia, my No. 1 priority is creating jobs and economic prosperity in our city. Attracting investment is critical to this goal, which is why I’ve been a strong advocate for the EB-5 Regional Center Program, a federal initiative that’s created more than 1,300 jobs in South Carolina — at no cost to taxpayers.

For more than 25 years, this program has been key for financing economic-development projects across America. EB-5-funding covers infrastructure, real estate, energy, health care, schools, hotels and manufacturing, providing the “gap” capital needed to jump start projects that otherwise would not be viable.

The Brooking Institute estimates that EB-5 has directly generated more than 85,000 jobs and $5 billion in investment, with most of this realized since 2010 as the program has become more established.

To put it simply, EB-5 puts Americans to work and builds communities.

However, it is set to expire on Dec. 9, unless Congress acts. EB-5 has been reauthorized without controversy since 1990, but now some critics with narrowly focused interests threaten its survival.

We can’t allow special interests to hold future investment hostage. Instead, what is needed is reform and a permanent extension of the program. There have been some instances of fraud or mismanagement, as well as regional imbalance of investment. But these problems can be best dealt with by intelligent reform, not by losing a key catalyst for growth.

This is why I have been working with the U.S. Conference of Mayors to advocate for integrity measures, permanent expansion and a comprehensive reform package.

My vision is for Columbia to be a world-class-city — one of the most talented, educated and entrepreneurial communities in America. Extending and reforming the EB-5 program will support our efforts by attracting investment and jobs to central South Carolina.

Washington is as divided as ever. But one goal on which all political parties and regions agree is the need to revitalize America’s economy as it rebounds from the great recession. Given the overwhelming support for the EB-5 program, Congress should unite to reauthorize and improve it to ensure that communities like ours have the resources to plan and manage their own futures.