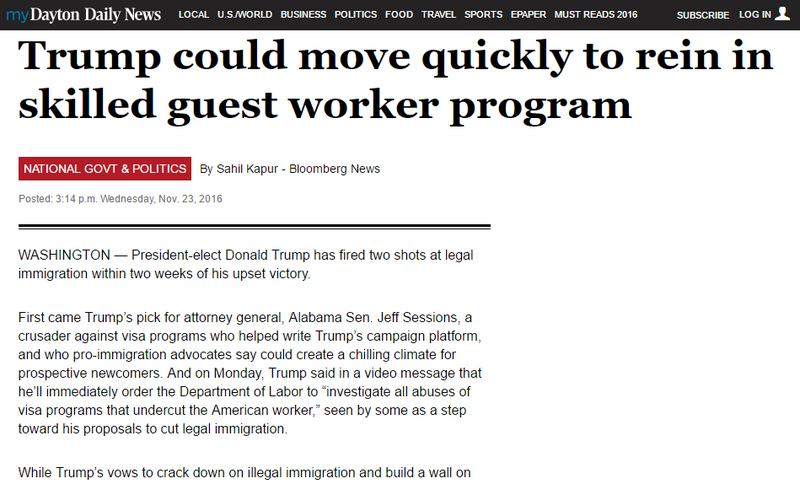 First came Trump’s pick for attorney general, Alabama Sen. Jeff Sessions, a crusader against visa programs who helped write Trump’s campaign platform, and who pro-immigration advocates say could create a chilling climate for prospective newcomers. And on Monday, Trump said in a video message that he’ll immediately order the Department of Labor to “investigate all abuses of visa programs that undercut the American worker,” seen by some as a step toward his proposals to cut legal immigration.

While Trump’s vows to crack down on illegal immigration and build a wall on the southern border drew the most attention during the campaign, the president-elect may be able to move more quickly on his promises to go after legal immigration programs pertaining to skilled guest workers.

“I have a client who was looking at an O-1 visa,” said Greg Siskind, an attorney based in Memphis, referring to a category available to people who demonstrate “extraordinary ability” in fields such as arts, sciences or athletics. “She was an entertainer from Europe who was very successful. And she said she’s got choices in the world and that this is not the greatest time to be coming to the U.S.

“I’ve had other clients who’ve told me maybe this is the time to think about Canada or countries other than the U.S.,” he said.

Paul Herzog, an immigration lawyer based in Los Angeles, said some of his clients are eagerly speeding up their applications for fear of rules tightening under Trump. “Many are in wait-and-see mode,” he said.

Some foreign investors seeking to immigrate through the EB-5 program, which allows a person to obtain a green card by committing at least $500,000 to a project that creates jobs, also are reconsidering.

“We’ve had some clients of Muslim background back out and decide to do something different,” said Angelique Brunner, the founder and president of EB-5 Capital, a regional center for immigrant investors based in Washington. “We have quite a few clients from targeted backgrounds that’ve been highlighted recently — disabled, LGBTQ, people from different religious backgrounds.”

“The president-elect mentioned a number of groups and those are the ones we’re seeing hesitancy from,” she said.

Trump’s transition website promises to “reform legal immigration to serve the best interests of America and its workers,” echoing language Sessions and other so-called restrictionists have used to go after visa programs. Trump’s campaign website promises “new immigration controls to boost wages and to ensure that open jobs are offered to American workers first.”

In addition, it promises to pick immigrants “based on their likelihood of success” and financial self-sufficiency, and to “vet applicants to ensure they support America’s values, institutions and people.”

Federal law gives the president broad authority to enforce immigration law, as well as regulatory leeway in dealing with people who seek to enter lawfully. Advocates on both sides of the debate say a Justice Department run by Sessions, who has long attacked visa programs as harmful to native-born Americans, could use its prosecutorial authority to intensify scrutiny of employers who hire international workers or businesses pursuing foreign investors with the promise of a green card.

“The attorney general’s office and the Department of Justice could create a chilling effect on the use of legal immigration — if it wanted to,” said David Leopold, an immigration attorney and former president of the American Immigration Lawyers Association. “That is a big fear.

“You could have an enforcement-heavy environment and that’s going to make restrictionists feel good,” he said. “But if we enforce the law to the extent that it shuts down immigration, then the American people and the economy are going to suffer.”

Those who want new limits on immigration are cheering the Sessions pick, hoping he’ll step up investigations of programs like the H-1B, which permits up to 85,000 skilled workers annually for specialty occupations and is popular in Silicon Valley.

“I’m all for it. He’s probably the best person in the country for the job,” said Mark Krikorian, an advocate for cutting immigration to the U.S. who runs the Center for Immigration Studies.

Immigration opponents are spoiling for the fight, which is likely to alienate some Republican allies such as the U.S. Chamber of Commerce.

“It’s going to be a hard political argument to make because the lobbyists are going to say, ‘Yeah they violated the law, but they shouldn’t be prosecuted,’ ” Krikorian said of pro-immigration lobbyists. “Please, go ahead and make that argument.”

The debate comes as Trump is considering, among others, Kris Kobach, the Kansas secretary of state and author of various immigration crackdown laws, to run the Department of Homeland Security, which oversees immigration enforcement.

Under the Immigration and Nationality Act of 1952, the president has the authority to prohibit admission for “any class of aliens” into the country considered “detrimental to the interests of the United States” for any period of time.

It is already used to ban war criminals and communists, but Trump indicated during the campaign he would broaden it by blocking immigrants from countries like Iraq and Syria, for whom he said vetting is inadequate to block potential terrorists.

While Trump would need an act of Congress to substantially raise the qualification standard for an H-1B visa or to lower the annual cap, he could use his executive power to tighten rules and make the process more painful for applicants, experts and activists said. That may include reversing President Barack Obama’s steps lifting barriers for workers going through the green card process to switch jobs or sponsor a spouse.

“There’s quite a bit they could do in that area” without congressional approval, Krikorian said.

He suggested Trump replace the H-1B “lottery” in the event that there are more applicants than the cap allows — a common occurrence — with a system that gives preference to workers who are offered the highest salaries, or raise the wage standards that prospective workers must be paid in order to qualify.

“That undercuts the use of H-1Bs for cheap labor,” he said.

Trump would also have the power to ban more employers who have violated H-1B rules from sponsoring workers. He could prohibit certain regional centers from accessing the EB-5 program, which the president-elect himself has used to lure wealthy Chinese investors to help fund Trump Tower.

In addition, the Department of Homeland Security has some discretion when deciding which applicants to admit with O-1 visas or the related EB-1 program, which allows green cards for those who demonstrate extraordinary ability, experts said. It also has leeway in choosing who to admit under the “national interest waiver” category.