How the Election Will Impact Housing 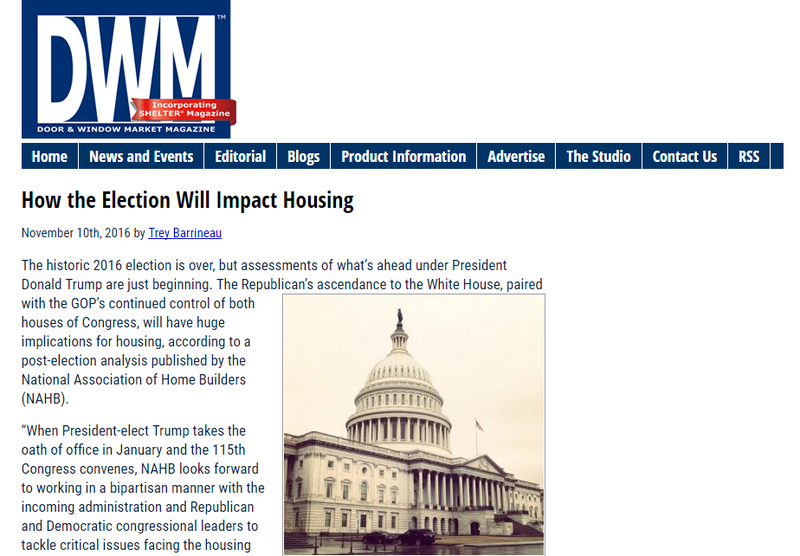 The historic 2016 election is over, but assessments of what’s ahead under President Donald Trump are just beginning. The Republican’s ascendance to the White House, paired with the GOP’s continued controlcapitol1 of both houses of Congress, will have huge implications for housing, according to a post-election analysis published by the National Association of Home Builders (NAHB).

“When President-elect Trump takes the oath of office in January and the 115th Congress convenes, NAHB looks forward to working in a bipartisan manner with the incoming administration and Republican and Democratic congressional leaders to tackle critical issues facing the housing industry,” said NAHB chair Ed Brady, a home builder and developer from Bloomington, Ill.

To achieve those goals, the NAHB, for the first time in its 74-year history, endorsed 137 congressional candidates (113 Republicans and 24 Democrats). NAHB says 129 of its endorsed candidates were winners on Election Day, a success rate of 95 percent.

With the Republicans retaining control of the Senate, NAHB says the outlook for a compromise on two energy bills passed by both chambers is good. NAHB supports language in the House version (H.R. 8) that would ensure residential energy codes remain affordable.

Immigration reform is another key issue for the housing industry. Sen. Chuck Grassley (R-IA) retains the chairmanship of the Senate Judiciary Committee, which has jurisdiction over immigration and patent reform.

Grassley is likely to focus on enhancing immigration enforcement programs, such as mandatory E-Verify, and advancing major reforms to the EB-5 investor program, which is important to NAHB’s multifamily and production builders. EB-5 grants green cards to foreign entrepreneurs (and their spouses and unmarried children under 21) if they invest in a commercial enterprise in the United States and plan to create or preserve ten permanent full-time jobs for qualified U.S. workers.

NAHB will also seek to work with Grassley on subcontractor liability and a market-based guest worker program.