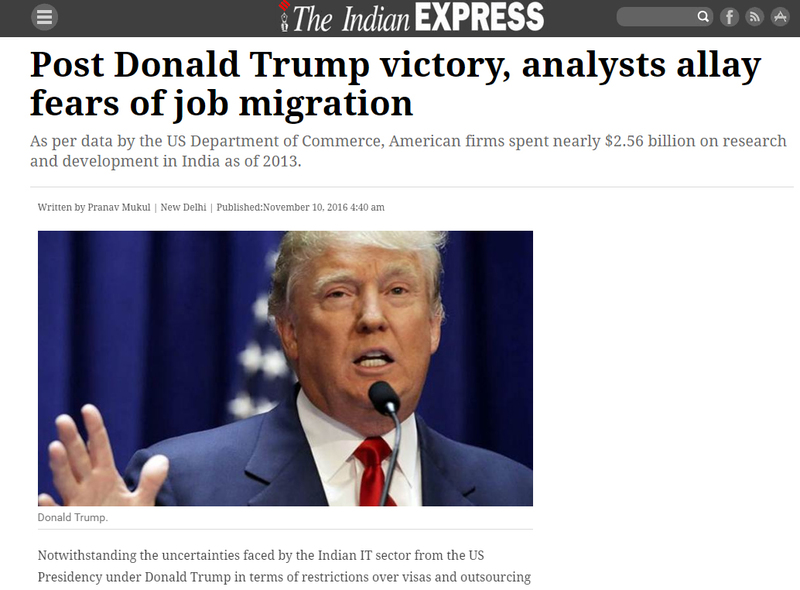 As per data by the US Department of Commerce, American firms spent nearly $2.56 billion on research and development in India as of 2013.

Notwithstanding the uncertainties faced by the Indian IT sector from the US Presidency under Donald Trump in terms of restrictions over visas and outsourcing of jobs, experts believe it might be difficult for Trump to deliver his poll promises of bringing jobs back, considering that US policies are primarily based on interests of businesses.

As per data by the US Department of Commerce, American firms spent nearly $2.56 billion on research and development in India as of 2013. An analyst with a leading industry lobby group said that if Trump tightens the strings on immigrant human resources deployed in the US, it could make firms shift R&D bases to places like India in search of better talent or cheaper labour costs.

“India is a hot market when it comes to R&D, and companies are continuing to innovate means and ways for R&D, which presents a huge talent pool which could be more affordable for the companies that want to invest in R&D,” the analyst said.

In a statement issued post Trump’s victory, India’s IT sector industry body Nasscom said: “Many of his observations during the campaign concerning high-skilled immigration and outsourcing were based on fabrications put out by critics ..”.

The reaction of Trump’s victory by Indian IT companies’ stocks on Wednesday flagged the concerns that these firms may be set to face going ahead. Gartner’s Research Director Arup Roy said that Trump’s administration could add to the sector’s woes. “Trump administration’s protectionist views would have further dampening impact on growth prospects, if the views were to crystalize into some serious policy implementations. However, what happens during campaigns and what actually transpires in office can vary greatly and we did get early signs of that in his victory speech, but at minimum it is headline risk and adds to the uncertain times,” he said.

Furthermore, industry analysts believe that Trump may further tighten or even cancel the already restrictive, the H-visa program. “A reduction in the quota for H1B visa will impact the Indian IT companies as they send their employees to work on-site in US. Trump has said that he wants to bring back jobs lost to outsourcing. This could negatively impact the Indian IT sector, which gets about 60 percent of its $110 billion yearly revenue from the US,” said Saravana Kumar, CIO, LIC MF.

Immigration law firm Davies & Associates LLC said that in the backdrop of a possibly restrictive H-visa program, students and high-net-worth Indians aspiring for a US Green Card could start opting for the EB-5 visa program. “Trump branded development projects have been funded by wealthy Chinese investors using the EB-5 program. Trump clearly appears to be open to high-net-worth investors coming to the US and receiving a “Green Card” in return for making a qualifying investment through the EB-5 program,” the firm said.