Representative: Election has no impact on Auburn medical tourism project 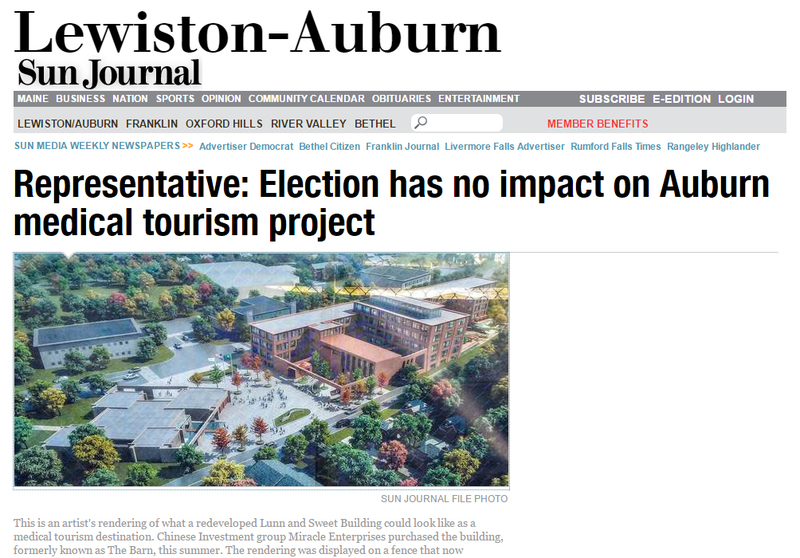 This is an artist's rendering of what a redeveloped Lunn and Sweet Building could look like as a medical tourism destination. Chinese Investment group Miracle Enterprises purchased the building, formerly known as The Barn, this summer. The rendering was displayed on a fence that now surrounds the building.

It's unclear what President-elect Donald Trump's relationship with China will look like once he takes office, but the representative for a proposed Chinese medical tourism facility in Auburn said he does not believe the recent election will affect the $40 million project.

The project, slated for the old Lunn and Sweet Shoe Factory on Minot Avenue, would be built with money from wealthy Chinese investors looking to move to the United States and would serve rich Chinese patients seeking medical care from Central Maine Medical Center in Lewiston.

Tony Yick said he does not believe Trump's election will impact the proposed five-star resort, though he suspects Trump may increase the amount foreigners would need to invest in such a project in order to receive a visa to live in the United States.

Trump repeatedly slammed China during his campaign, accusing it of "raping America," calling the country a currency manipulator and threatening 45 percent tariffs on imported Chinese goods. In recent days, a Chinese delegate refuted Trump's 2012 claims that global warming was a hoax created by China to hurt U.S. manufacturing's competitiveness.

Yick said leaders of the Auburn project plan to work with the Maine Department of Economic and Community Development with the hope of moving forward soon.

The DECD plans to become a federally approved EB-5 regional center, which would help funnel money into Maine by connecting foreign investors with projects that need cash. Under the EB-5 program, those foreign investors can obtain a visa and, eventually, a green card if they invest $1 million in the United States. They only have to invest $500,000 if the project is in a high-unemployment or rural region.

Maine has three private EB-5 regional centers but none is wholly within the state of Maine. One was, but USA Lifestyles, which was operated by the owners and executives of the Saddleback ski resort and targeted to help Franklin County and Livermore Falls, was terminated in October 2015 by U.S. Citizenship and Immigration Services, the agency that oversees regional centers.

According to U.S. Citizenship and Immigration Services, a regional center can be terminated if it fails to submit required information or no longer serves the purpose of promoting economic growth. It is unclear exactly why USA Lifestyles was terminated but the regional center was operated by Saddleback owners and Saddleback closed last year for lack of funding.

DECD Commissioner George Gervais said his department expects to hear "any day now" that U.S. Citizenship and Immigration Services has approved it as a new regional center.

"I'm confident that this will move forward," he said. "In fact, we're making plans as if we already had."

Gervais said the DECD has about half a dozen projects lined up and likely to move forward, though he would not confirm whether the Auburn medical tourism resort was one of them. He said the projects are largely concentrated in southern Maine, though there are some on other parts of the state.

Gervais declined to talk about the projects in detail since they have not officially partnered with the DECD because it is not yet an approved regional center.

Gervais said he is unsure how the election will affect the EB-5 visa program.

"I do wonder," he said. "There's no guarantee that it continues every single year into the future. There may be some new attitudes toward the program that will impact it. We'll have to wait and see how that plays out."