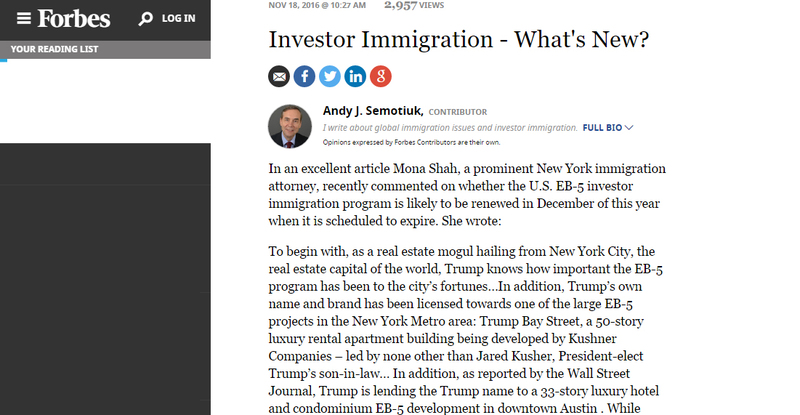 In an excellent article Mona Shah, a prominent New York immigration attorney, recently commented on whether the U.S. EB-5 investor immigration program is likely to be renewed in December of this year when it is scheduled to expire. She wrote:

To begin with, as a real estate mogul hailing from New York City, the real estate capital of the world, Trump knows how important the EB-5 program has been to the city’s fortunes…In addition, Trump’s own name and brand has been licensed towards one of the large EB-5 projects in the New York Metro area: Trump Bay Street, a 50-story luxury rental apartment building being developed by Kushner Companies – led by none other than Jared Kusher, President-elect Trump’s son-in-law… In addition, as reported by the Wall Street Journal, Trump is lending the Trump name to a 33-story luxury hotel and condominium EB-5 development in downtown Austin. While President-elect Trump himself is not a partner in the financing of these developments, the fact that he has been willing to license his name out to these projects suggests at a minimum, implicit support for the program.

While the amount required to be invested may increase from $ 500,000 to $ 800,000, other aspects of the EB-5 investor immigration program, including improvements to the program’s integrity, are unlikely to be changed when the program is renewed in the upcoming weeks. So much for the American program.

By way of historical background, in 1986 Canada launched the Immigrant Investor Program. Its aim was to attract experienced business persons to spur job creation through entrepreneurship, investments, and spending. Unfortunately, the program was terminated in 2014. Since then there has been no federal investor immigration program in Canada, although the Province of Quebec has maintained a provincial program in its absence. El-Assal pointed out that the Canadian federal government is now looking to enhance Canada’s competitiveness and added that a new investor immigration program could prove to be an important aspect of Canada’s growth. The comment was timely since The Conference Board of Canada will be holding a discussion on this theme on December 6th and 7th in Toronto, titled Canada’s first ever Entrepreneur & Investor Immigration Summit. I have written about the need for such a program in Canada previously as well.

If Canada embarked on such a program, El-Assal argued that Canada’s funding objectives and dialogue between federal and provincial/territorial governments could determine the investment requirement and number of immigrants to be admitted under the program each year. For example, if Canada needed $10 billion for an infrastructure project, the investor immigration program could admit an average of 2,000 immigrants per year at $1 million each for five years. In other words, El-Assal proposed that economic need from time to time would determine program content. He felt that was the easy part though.

The hard part would be building public trust. Among the public’s concerns are the ‘sale’ of Canadian citizenship, fears that wealthy immigrants drive-up real estate prices, queue-jumping—the notion that the wealthy would be given advantage in the immigrant selection process, and fraud. He then set out some arguments to counter each of the objections listed.

Firstly, he pointed out that the old investor immigration program never sold citizenship. Rather, it offered permanent residence to immigrants who needed to fulfill Canadian residency requirements before they could qualify for citizenship. What is more, El-Assal argued that permanent residence could be made conditional upon the immigrant proving they physically resided in Canada.

As for the potential effect of wealthy immigrants on rising real estate prices, that requires more research. Nobody really knows for sure according to El-Assal. Public policy could then address the problem once it is better defined.

Rounding out El-Assal’s views, he said queue-jumping and fraud concerns could be addressed through processing that would have to follow normal channels and more rigorous background checks.

I should point out these are the views of El-Assal and not of the Conference Board of Canada itself, particularly since the Board is about to host a national meeting on the subject where it hopes to formulate a position on the subject. 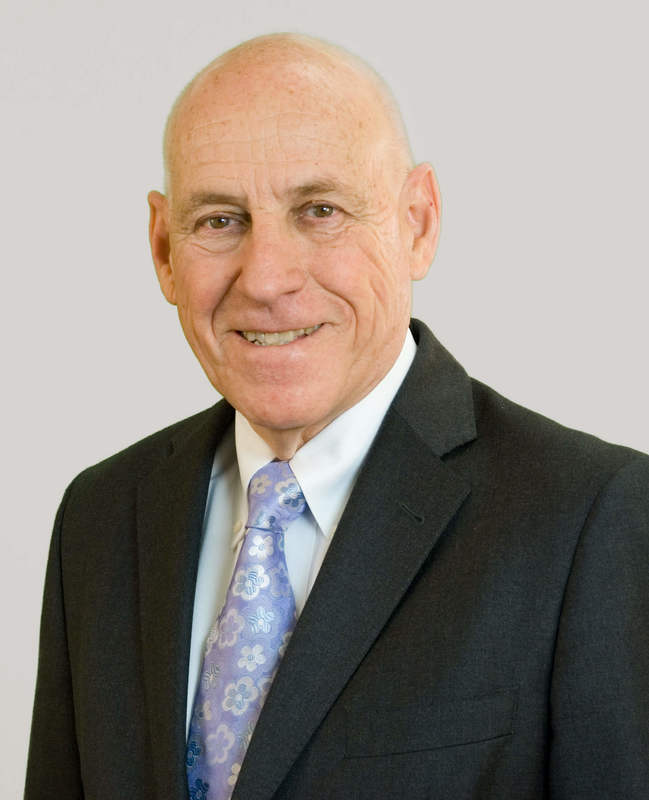 The Honourable Gerry Weiner is expected to be one of the participants at the up-coming Conference Board of Canada conference in Toronto on December 6th and 7th, 2016 and will likely add his voice supporting a call for a new Canadian federal investor immigration program.

One of the participants at the upcoming Conference Board conference will be the Honourable Gerry Weiner, who I previously interviewed on the subject of a new investor immigration program for Canada. As the architect of the previous Canadian program he is expected to voice his support for a new program. As other countries compete to attract foreign investors through their immigration programs to create jobs for their people, it is only natural that Canada should want to look at this area for itself. For my part, I recently outlined some ideas for what a new program should look like in ReNew magazine. Hopefully the Conference Board meeting will narrow down the range of options and come up with something useful for Canada, like for example, a better version of the EB-5 program in the United States.