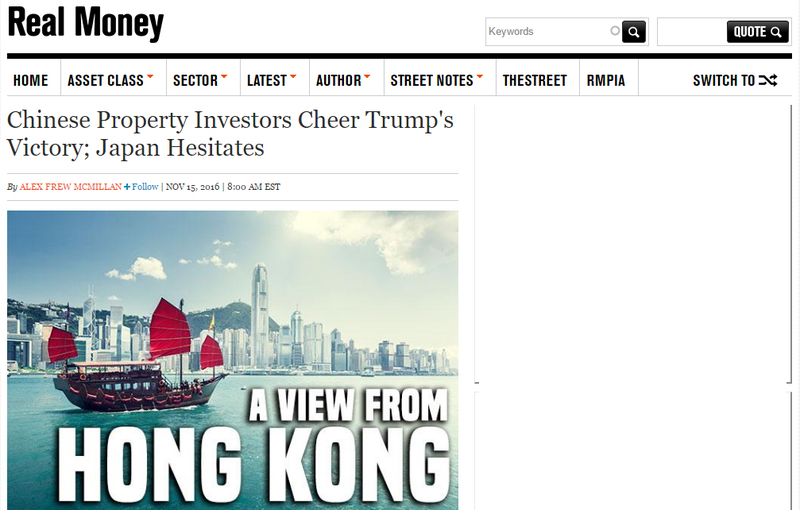 Here in Asia, we're still mulling the implications for the continent after the presidential victory of Donald Trump. It was as big a surprise in this region, as it was to the U.S. pollsters and media that read the situation in such a wrong way.

Trump's election has had an immediate positive effect on Chinese investors, East-West Property Advisors said, citing a survey that it conducted of 500 mainland Chinese professionals. East-West, which links Chinese investors with U.S. property agents, said 53% of Chinese people are now more likely to invest in U.S. real estate than before the election.

Only 16% of those surveyed said they are now less likely to buy U.S. property. Chinese citizens are keen on striking business deals that help build their wealth, East-West said. Those surveyed see a similar business-minded personality and strong negotiator in Trump.

"They do believe that the new President Elect will endeavor to make the U.S. economy better using his business negotiation skills," the company said in announcing its findings. "Principles and ideologies will be less important compared to expected business returns."

That's significant at a time mainland Chinese are looking to move money offshore. Chinese property has hit a ceiling in many cities and the currency is weakening. But East-West Property said it is unsure how Trump will change U.S. immigration, in particular the EB-5 scheme that grants green cards to investors.

The Chinese are the top international buyers of U.S. property, accounting for $27.3 billion in the 12 months through March 2016, 27% of the $102.6 total from around the world. They are also the largest group of applicants for the EB-5 scheme.

Both Chinese President Xi Jinping and Japanese Prime Minister Shinzo Abe have been quick to congratulate Trump. Despite his pledge to put a 45% tariff on Chinese imports, Trump says he and Xi have a "clear sense of mutual respect," according to a Reuters story about that call. Cooperation between the two countries "is the only correct choice," Xi reportedly said.

Trump's election appears to have made U.S. participation in the Trans-Pacific Partnership, or TPP, highly questionable. That may play into the hands of China, which is backing a rival free-trade group in Asia.

Abe is scheduled to meet Trump in person on Thursday in New York, having called the president elect immediately following his victory. The TPP, which Japan is backing, will no doubt be a major topic of conversation.

The Japanese economy showed surprising strength in the quarter through September, posting an annualized growth rate of 2.2%. Exports rose 2% although private consumption rose only 0.1%.

Nomura notes that the immediate impact of Trump's victory has been risk avoidance by Japanese companies. They may hold off on capital expenditures while figuring out Trump's policies in greater depth. A major fall in capital expenditure is the "main cause of concern," the investment bank said in a report.

A stronger U.S. economy would also boost Japan, the investment bank stated. Greater infrastructure and governmental spending in the United States would feed through to improvements in Japan's export-driven economy as well.

But Nomura economist Takashi Miwa noted in a report that an anti-foreign and protectionist stance from the new U.S. leader would likely result in a structural rise in the Japanese yen. The Japanese currency has already risen following the U.S. election, sending Japanese stocks lower -- although they have subsequently rallied.

A permanently strengthening yen would likely cause a loss of confidence for Japanese families, driving them to spend less. Exclusionary policies imposed by Trump might also cause Japanese companies to reconsider their global strategy, possibly re-shoring overseas operations back to Japan.

But given the need for Trump to get approval from Congress for changes in tariffs and the like, Miwa believes Trump's trade stance will be more moderate than the "somewhat eccentric form he proposed them."