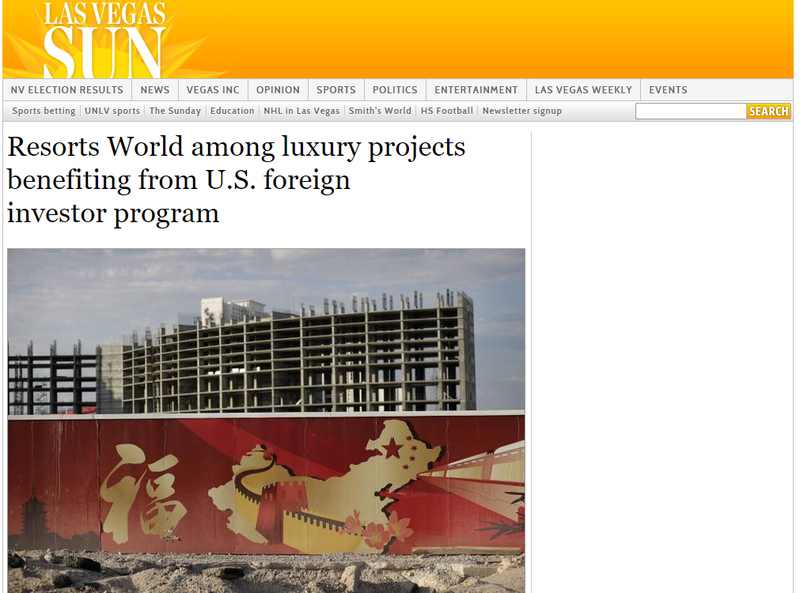 In this Aug. 26, 2016, photo, a wall with symbols of China partially blocks the view of the Resorts World property in Las Vegas. The Genting Group project, scheduled to open in 2019, has received nearly $1 billion from a program that grants permanent residency in the United States to those who are willing to immigrate and invest $500,000 in a business that creates at least 10 jobs.

A federal program meant to encourage investment in the United States from wealthy foreigners is increasingly supporting large luxury real estate projects, not the development in the rural and downtrodden districts that some say were the original targets of the program.

With billions of dollars flowing in, mostly from wealthy Chinese, the program faces an uncertain future. In September, Congress reset the expiration date on parts of the so-called EB-5 program to Dec. 9.

The program grants permanent residency in the United States to those who are willing to immigrate and invest $500,000 in a business that creates at least 10 jobs. Many of the projects that have received money have been in real estate, though investments have also gone to charter schools, medical centers and manufacturing plants. Some $15 billion of investments have been made through the program since 2005, according to the EB-5 Coalition, an industry group in Washington.

Critics have derided the program as essentially a legal way for immigrants to buy their way into the country.

Donald Trump’s election adds a new wrinkle. He campaigned heavily on immigration reform, pledging to build a wall on the Mexican border and increase the deportation of criminal noncitizens. He also said he wanted to reduce legal immigration and ensure jobs are offered to Americans first.

“Whether President-elect Trump will actually follow through on these pledges remains to be seen,” said Stephen W. Yale-Loehr, a law professor at Cornell University and an immigration lawyer. “It is always difficult for Congress to enact significant immigration changes because immigration is so complex and controversial.”

The United States is not alone in offering residence for investment. Germany, Australia and Canada have versions of the program, as do several small countries. Competition among Caribbean nations is rising for their citizenship-by-investment programs, with St. Lucia being the most recent to revamp its program.

Foreign interest is growing. According to an analysis by professors at New York University, investments in the program are increasingly financing large-scale, luxury or entertainment-oriented real estate developments. Among them: nearly $1 billion gathered in the last year from 2,000 investors to build a Chinese-style casino in Las Vegas, $600 million from 1,200 investors for New York’s mixed-use Hudson Yards project and $150 million from 300 investors to construct the Beverly Hills Waldorf Astoria.

The program was intended to reward people for putting money into the United States. Projects that raised more than $1 billion were practically nonexistent in the program before 2010, Jeanne Calderon of New York University’s Stern School of Business wrote in a March report on the program. But when banks turned off the credit spigot around the 2008 financial crisis, developers started getting more creative in finding alternative financing.

NYU tracks 27 projects across the United States that have raised more than $5.6 billion from foreign investors.

Many of these projects are run by large commercial developers who could proceed without any foreign investment but are reaching out to foreign investors for cheaper financing than they would receive from banks.

Reformers from both political parties are calling for a much tighter definition of the areas eligible for investment through the program to remove the tracts in prosperous urban areas and get money to underserved ones. They are also looking at raising the investment minimum to $800,000.

In addition, they hope to make the projects more accountable by requiring better disclosures to protect potentially vulnerable immigrants from fraudulent schemes. Federal securities regulators have filed several enforcement actions against people committing fraud through the program in recent years.

The issue has friends and foes on either side of the political aisle. Senators from rural parts of the country want more development dollars coming to their districts, while those from large cities want to maintain the status quo. As for the immigrants themselves, they are entering the program mostly in an effort to gain permanent residency in the United States, which gives project developers more power.

“Like so many things, there are a lot of people who are adversely affected but only by a little, and there are a very small group of developers who benefit — they win,” said David North, a fellow at the Center for Immigration Studies in Washington.

The Beverly Hills Waldorf Astoria is being developed by Beny Alagem, an Israeli-born American entrepreneur who also owns the Beverly Hilton. It has 9 acres and 12 stories and includes a hotel and a residential condominium tower. Three hundred investors contributed $150 million to the project in the form of a loan. It is estimated to create 3,629 jobs.

The Wanda Group, which is the largest commercial developer in China and is owned by the nation’s richest man, is said to be seeking foreign investment program financing for its Wanda Vista Hotel in Chicago. The city approved the project last November. The Wanda Group is also developing One Beverly Hills Hotel next to the new Waldorf in that city.

The Genting Group, a global development conglomerate based in Malaysia, is developing Resorts World Las Vegas with nearly $1 billion of program money. The $4 billion project includes 3,100 rooms and 100,000 square feet of gambling space, restaurants, shops, a panda habitat and a 4,000-seat theater.

Jeffrey Berkowitz is developing SkyRise Miami, a 100,000-square-foot multipurpose entertainment complex and observation tower along Biscayne Bay that will be the city’s highest building when completed. Foreign program investors are contributing 63 percent of the financing through a $270 million loan. About 540 investors are involved in the project, which is expected to create more than 6,000 jobs.

And 350 foreign program investors put up $175 million for Empire Outlets, a mall and hotel complex planned for Staten Island. Goldman Sachs is a partner in the project, which aims to create 4,500 jobs.

All of this investing has created a backlog of uncertain futures. Currently, 22,000 petitions are pending with the Citizenship and Immigration Services, which is under the Department of Homeland Security.