What Donald Trump as America's 45th President means for India 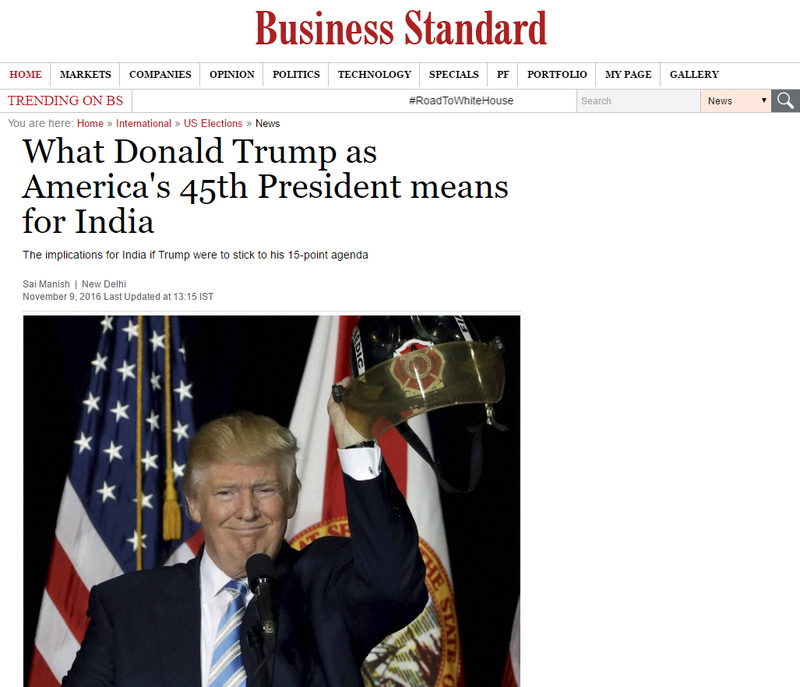 Bucking media opposition, popular perception and Hillary Clinton’s vicious campaign, Donald Trump has emerged as the 45th president of the United States of America. Trump elucidated on his 15-point agenda in the run-up to the elections. If he decides to implement them, it could impact the Indian government, people and businesses in several ways.

Here is a lowdown on the implications Trump’s policies as the US President could have for India.

1)   The Tax Plan: One of the highlights of Trump’s economic campaign is his plan to reduce corporate tax rates in the U.S to 15%. At present the rate stands at 35%. This would make the U.S one of the most attractive destinations in the world for businesses, especially for American businesses that have set shop in other countries to improve their profitability by paying less taxes. If Trump were to implement this plan, U.S businesses in India could be lured back to American soil. Take the case of Ford Motors. Trump has repeatedly flayed Ford during his campaign for moving manufacturing outside U.S especially to Mexico in a bid to circumvent high taxes. Now Ford India has been making good progress in India. Its manufacturing unit in Chennai recorded its highest ever exports this August. Ford India exported 67% of all its vehicles manufactured in India. In addition, it made a substantial investment in the growing business of car rentals in India by investing in Zoomcar. For all the money Ford India earns, it pays the same corporate tax rate in India as it does in the U.S. If Trump were to come true on his promise to slash corporate tax to 15%, Ford India could well be tempted to move a part of its revenue earning processes back to Chicago from Chennai. That would be bad news for over 2000 employees working at the Ford factory in India. Trump’s massive tax cut would more than offset the advantages of cheap labour that India provides to Ford. Other American businesses in India could be tempted to do the same.

2)  Plan to curtail Chinese Trade: If there is anyone Trump has lambasted more than Clinton during his campaign, it is China. The Republican candidate has threatened to label China as a currency manipulator. He has called for imposing higher tariffs on Chinese goods, initiate litigation against China for stealing American trade secrets and bring trade cases against China at the World Trade Organisation (WTO) to force it to cut down its trade subsidies. Trump has harped on the need to reduce the trade deficit with China which touched a record high of $365 billion in 2015. If Trump fulfils his promises and decides to curb Chinese imports, it would hardly benefit India. That’s because Chinese manufacturing and existing trade with the U.S is eons ahead of India. The biggest imports of the US from China are computers. According to data available with the US Census Bureau, Americans imported computer hardware worth $74 billion in 2015 from China. Add telecommunications equipment and the figure touches $100 billion. In comparison India’s computer and telecom equipment exports to U.S was just above $2 billion. India’s biggest exports to the U.S are gems and diamonds followed by pharmaceuticals pegged at $66 billion. China, meanwhile, exports pharma products worth $20 billion to the U.S. Given India’s strong pharma manufacturing, Trump’s promise to curtail China could open possibilities of diverting capture a part of the trade that China would lose.

3) Cutting Down Immigration: Trump has at been at his radical worst while talking about immigration. His attacks have been directed towards the Mexicans, with Trump advocating building a wall along the border and making the Mexicans pay for it. He has also called for making Americans being prioritised for open jobs and restricting skilled visas to make more jobs available to Americans. That would be bad news for top Indian IT companies that make their billions by using the H1B visa programme that allows low cost skilled Indians to work in the U.S. In 2015, the US issued 1,72,748 H1B visas, many of which were issued to Indians employed by companies like TCS, Infosys and Wipro. In 2014, Infosys alone filed more than 24000 Labour Condition Applications (LCA) required to obtain these visas. Many US companies operating in India like Cognizant also send their Indian staff to U.S on these visas since Indians are cheaper to employ as compared to American workers. Trump had earlier termed the H1B visa regime unfair. And later in a bid to earn the support of the Indian-American community, he softened his stand. But Indians companies know that every American presidential opposes the H1B visa programme while pitching himself to be elected and never follows through with the promise of curtailing them once in office.

4)  Reviving the American Economy: Trump plans to boost GDP growth to 4% by adding 25 million jobs over the next decade. He plans to do this through his lower corporate tax rate plan and easing regulatory frameworks for businesses. He has also promised to cut federal spending to balance the budget through his penny plan that envisages cutting one cent for every dollar in the federal budget over the next few years. That would mean an enhanced role for private businesses in creating jobs to achieve Trump’s targets. That would mean enhanced opportunities for not just big businesses in India but also smaller ones to invest in the U.S. The EB-5 visa programme is likely to further gain traction in India if Trump were to follow through with his agenda of cutting federal spending while at the same time easing regulation for businesses. Under the programme, Indian businesses would require to invest a minimum of $1 million and create at least 10 jobs for American workers. If any entrepreneur can do this in the U.S, they are eligible for a green card. India has 2.5 lakh millionaires and the number is expected to double by 2025. That would mean more opportunities for Indians to invest in the U.S and get that much coveted and aspirational green card.

5)  Foreign Policy and Terrorism: Trump has used strong words on the need to curtail ISIS and curb immigration from countries that export terror. This would comfort India, which has seen a surge in support for ISIS among its young population. If Trump fulfils his promise of restricting immigration, that would further hurt Pakistan. But what would truly be eagerly watched by the Modi government in India is Trump’s controversial plan to establish a Commission on Radical Islam. Trump’s plan involves launching an ideological offensive that includes using the media as an instrument to inform people about the core ideology and convictions of radical Islam. Trump has also planned to expose networks in American society that promote radical Islam and rewarding people to report those exhibiting signs of radicalisation to authorities. This would come as a big boost to Modi government’s own domestic security policies which focusses on the need to curb growing Islamic radicalization in India. After coming to power, the Modi government has been proactive in using the National Investigative Agency (NIA) to apprehend people influenced by or supportive of ISIS. Trump’s ideological offensive against radical Islam could be a force multiplier for the Modi government. On the flip side, if Trump decides to walk the talk he could further alienate the Muslim community already apprehensive of a right wing government in India.

6)  The Energy Plan: Trump has promised to unleash America’s shale oil, natural gas and coal reserves to make U.S energy self-sufficient. If elected president, he has also promised to open onshore and offshore leasing on federal lands and lift the moratorium on coal leasing. India, like many other nations in the world, is at the mercy of Organisation of Petroleum Exporting Countries (OPEC) when it comes paying a price for oil. A rise in the price of fuel bleeds India’s domestic oil companies, throws the government’s fiscal deficit targets in disarray and leads to a spike in the prices of essential goods. Rising fuel prices and the escalating price of food has the potential of making incumbents loose an election in India. If Trump were to come true on his promises, India could benefit massively. Opening up of the US oil sector could lead to price stability globally. It could also throw open massive business opportunities for Indian oil companies including the state owned Oil and Natural Gas Corporation of India (ONGC) whose foreign arm ONGC Videsh Limited (OVL) has been expanding its operations globally.

7)  Scrapping Obamacare: Trump has used colorful adjectives to describe Obamacare during his campaign and has vowed to scrap the scheme aimed at providing affordable healthcare to Americans. That could be bad news for the Indian pharma sector. As pointed above, pharmaceuticals constitute the second biggest exports of India to the U.S. India’s strength in manufacturing affordable generic drugs complemented the objectives of Obamacare. Indian generic drug companies had gained massively with a sub-legislation under Obamacare that allowed the use of ‘biosimilars’. According to US Census Bureau data, when Obamacare was signed into law in 2010, India’s pharma exports to the U.S were $31 billion. Five years of Obamacare more than doubled pharma exports from India to the U.S to $66 billion. If Trump implements his promise to junk Obamacare, Indian drug companies could be severely hit. Indian IT companies which provide support to the program could also end up losing their business that could lead to job cuts in India.