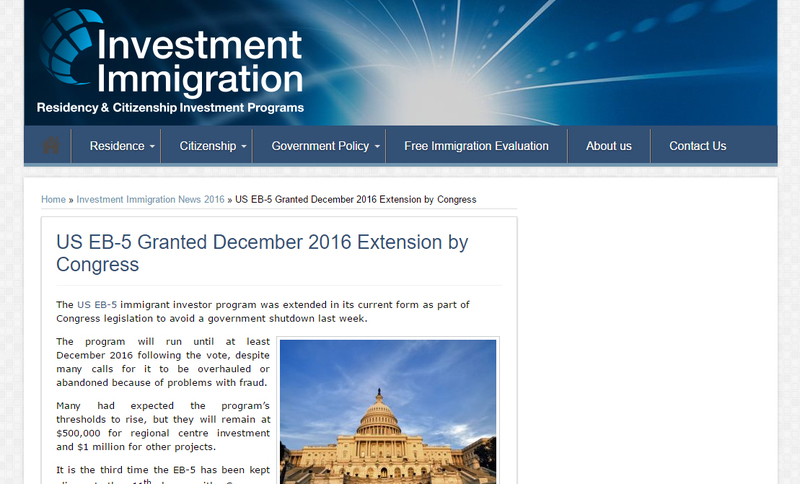 The US EB-5 immigrant investor program was extended in its current form as part of Congress legislation to avoid a government shutdown last week.

US EB-5 Granted December 2016 Extension by CongressThe program will run until at least December 2016 following the vote, despite many calls for it to be overhauled or abandoned because of problems with fraud.

Many had expected the program’s thresholds to rise, but they will remain at $500,000 for regional centre investment and $1 million for other projects.

It is the third time the EB-5 has been kept alive at the 11th hour, with Congress passing a late vote in September 2015, and twice since granting extensions. Such late extensions have done nothing for investor confidence.

The feeling is the program was renewed without changes for political reasons, with many EB-5 funded projects underway in what is an election year.

Analysts are expecting the thresholds to rise should the program be overhauled in the near future, while they also say the system for forming regional centres will also be redefined, given a number of fraud cases have arisen from this investment stream.

The American Job Creation and Investment Promotion Reform Act calls for a raft of changes, including raising the thresholds to $800,000 and $1.2 million depending on the class of investment.

The new legislation, as well as increasing the threshold, also calls for a number of new powers aimed at combatting fraud.

New powers would include giving the U.S. Department of Homeland Security (DHS) more power to deny applications linked to fraud and other crime.

The DHS would also be empowered to conduct audits and investigate fraud using fees paid by the regional centres, and conduct background checks on those involved in projects.

Further powers would also include the vetting of projects before money changed hands and for risks and conflicts of interests to be disclosed to investors before any deal was struck.

There are also concerns over waiting times under the program, particularly for Chinese applications, who could now be faced with five year delays because of nationality caps.

The popular visa generated close to $5 billion in investment in 2015, with the regeneration of some of the biggest cities in the U.S. completed with the help of the funds.

Recently it was highlighted that Chinese immigrants are asking to put children as primary candidates on their applications over fears they may exceed the dependent age of 21 by the time approval comes around.

Meanwhile, Indian nationals with aspirations of living in the US are being told the EB-5 visa is the most realistic way of achieving their goal.

Downtown Dallas has been rebuilt and regenerated using EB-5 funds.

In Dallas, the $500 million raised by Civitas EB-5 Capital has been spent on new offices, hotels and apartment buildings both downtown and in the nearby area.

There has also been a number of fraud cases linked to the investment program.

The developer behind a biomedical research facility in Vermont, which benefitted from EB-5 funding, is currently being investigated for misusing the money. The project had attracted $83 million of investment from 166 foreigners, many of them Chinese, who now risk losing their money. Developer Ariel Quiros, and several of his associates, stand accused of using the funding to buy a ski resort, a luxury New York condo and to pay tax bills.

Developer Lobsang Dargey was accused of defrauding Chinese investors out of money for a tower in Belltown. Dargey no longer has control of the project and denies any wrongdoing.

American Life, a recipient of more than $1 billion in EB-5 investment money, was fined $1.2 million for facilitating payments to unlicensed intermediaries in the U.S.