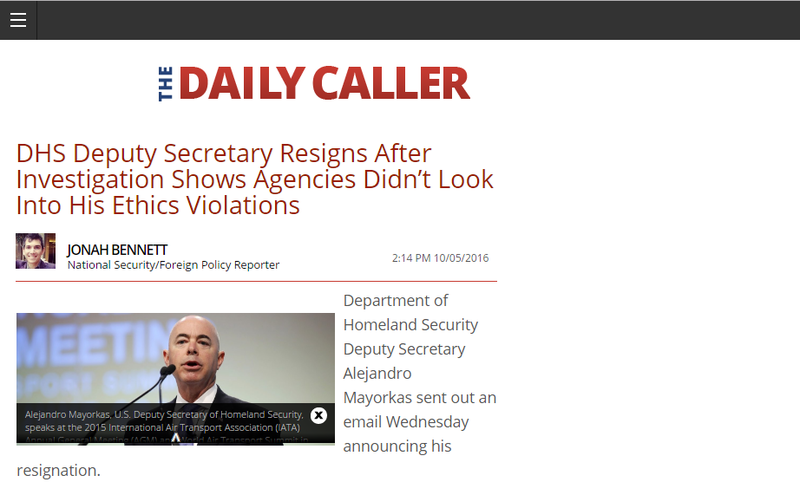 The announcement follows an investigation by The Daily Caller News Foundation that showed neither the DHS, nor the Office of Government Ethics properly examined major ethics violations related to his fast-tracking of visas for a company run by Hillary Clinton’s brother.

DHS spokeswoman Marsha Catron told The Daily Caller News Foundation Wednesday that Mayorkas is leaving the agency a couple months early — before the Obama administration comes to a close and a new administration takes over.

“I am writing to inform you that my last official day as the Deputy Secretary of Homeland Security will be October 28th,” Mayorkas said in an email obtained by TheDCNF.

“It has been a special privilege to serve in the Administration of President Obama and as the Deputy to Secretary Johnson,” he added. “I am forever grateful to the President for the opportunities he has given me, especially the opportunity to be your colleague.”

DHS Secretary Jeh Johnson added his own words in a separate statement.

“Deputy Secretary Alejandro Mayorkas announced publicly today that he is departing the Department of Homeland Security, effective October 28. On behalf of the entire Department, I thank and salute Ali for his great leadership,” Johnson said.

The Daily Caller News Foundation exclusively reported Monday that both the DHS and OGE had declined to fully pursue an ethics investigation against Mayorkas. A DHS inspector general report from 2015 revealed he improperly involved himself in the visa application process in order to fast-track visas for a company run by the presidential nominee’s brother, Anthony Rodham, and now-Virginia Gov. Terry McAuliffe.

At the time, Mayorkas was serving in the role of  Director of United States Citizenship and Immigration Services.

DHS did not file an agency report with OGE detailing why no further ethics investigation was needed. The OGE Director did not recommend the DHS head launch an investigation, as he apparently had no reason to believe a violation had taken place.

This company, GreenTech automotive, was mostly financed by EB-5 investor visas, but to date, it has not sold any electric cars at all and only produced a total of 25. In addition, GreenTech is under investigation for securities fraud.