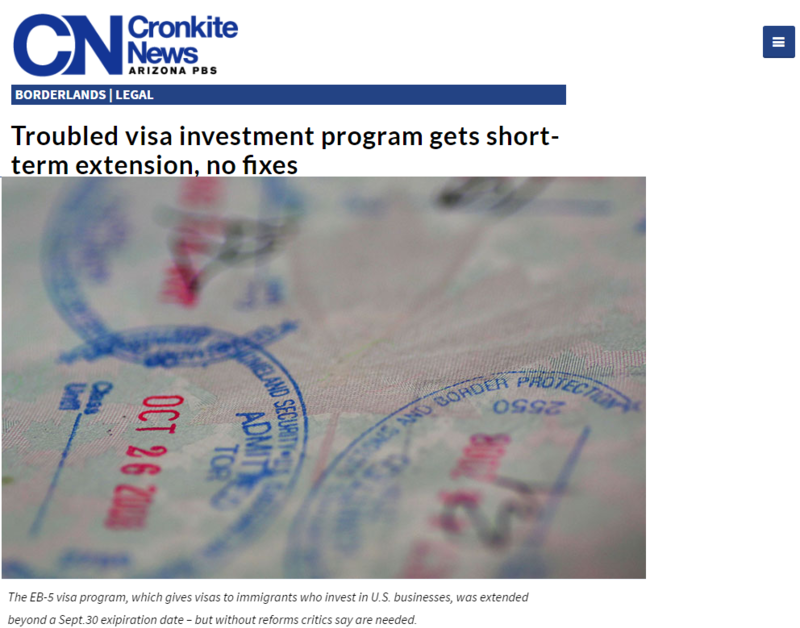 Congress granted a short-term reprieve this week to a visa program that benefits immigrants who invest in U.S. businesses, but that extension came without any reforms critics say are necessary to prevent fraud, abuse and security risks.

The EB-5 program was set to expire Saturday, but lawmakers Wednesday included it in the short-term budget bill that will keep the federal government running until Dec. 9.

All that did was extend the program, however – it did not address the visa program’s regional centers that critics said as recently as last week are “deeply flawed” leaving the program “mired in fraud and abuse.”

But even as they call for reform, lawmakers say the EB-5 program is a “critical financing tool” that has helped establish businesses and create jobs – including in Arizona where much of the investment has gone to establish charter schools among other businesses.

“I believe that the EB-5 program should be strengthened when it comes to its oversight and integrity,” Sen. Jeff Flake, R-Arizona, said Friday in a statement released by his office. “We need to amend it, not end it.”

The EB-5 program, created in 1990, grants a green card to investors and their families who put at least $500,000 into a business that creates 10 full-time jobs in high-unemployment or rural areas. Two years later, the Regional Center Program was added to let investors pool their money and make it easier to obtain a green card.

U.S. Citizenship and Immigration Services administers the visas and approves the regional centers. There are currently 861 regional centers nationwide, 14 of them in Arizona.

Fraud allegations were first raised in an August 2015 Government Accountability Office report that found several cases where USCIS processed fake documents used by immigrant investors to show that the funding was “lawfully obtained.” A follow-up published this September said the agency had taken steps to address the fraud risk, but recommended implementation of a fraud risk profile to combat the issue.

Seto Bagdoyan, audit services director at GAO, said EB-5 is “inherently at risk” for fraud because it deals with foreign investments.

He noted that the Securities and Exchange Commission opened “50 to 60” investigations against fraudulent regional centers, most of which dealt with security fraud. That is after the SEC opened fewer than 10 cases from February 2013 to December 2015, according to Senate testimony by SEC Associate Director Stephen Cohen in February.

“The EB-5 program today is mired in fraud and abuse,” Sen. Patrick Leahy, D-Vermont, said Sept. 22 in a statement on the Senate floor. “It has strayed from its important policy goals. The incentives Congress created to direct investment to underserved areas – the very reason I support this program – have been rendered meaningless.”

USCIS has terminated 62 regional centers, two in Arizona alone, but opponents of the program argue it is not enough to simply shut down these fraudulent centers because Congress should prevent them from establishing themselves in the first place.

The agency can terminate centers that fail to submit required information or “no longer serves the purpose of promoting economic growth,” after giving 30 days notice. Terminated centers cannot “solicit, generate or promote investors or investments,” but investors will not necessarily be stripped of their green cards.

Rudy Vetter is the chief marketing officer of Green Card Fund, an Arizona-based regional center that funds charter schools, hospitals and other projects. Vetter said he is working with a national trade group to get Congress to enact reforms that will cut down on fraud while making it easier for investors to get visas.

“I would like to see a clear layout of the rules and regulations that all regional centers understand that they have to follow,” he said. “I support measures by the USCIS to have a look at the industry and audit when needed.”

In December, Flake introduced the EB-5 Integrity Act to create accountability and transparency measures, combat fraud and protect national security, but that bill stalled in the Judiciary Committee, where it has yet to get a hearing.

USCIS would not comment on prospects for program reform, except to say in a prepared statement Friday that it will “provide further guidance if the EB-5 Regional Center Program is extended beyond Dec. 9, 2016, or if Congress enacts legislation to reauthorize the program.”

Vetter said Congress needs to step up and enact reforms for a program that he said is essential to economic growth in the country and allows thousands of Arizona citizens to work, go to school and even obtain quality health care, thanks to the regional centers.

“Legislators need to understand the impact and consequences of their actions in both future and existing projects,” he said.

“It’s important to understand that EB-5 doesn’t only take place on paper in Congress,” Vetter said. “It takes place at home, in their districts and has a direct impact on the citizens they work for.”