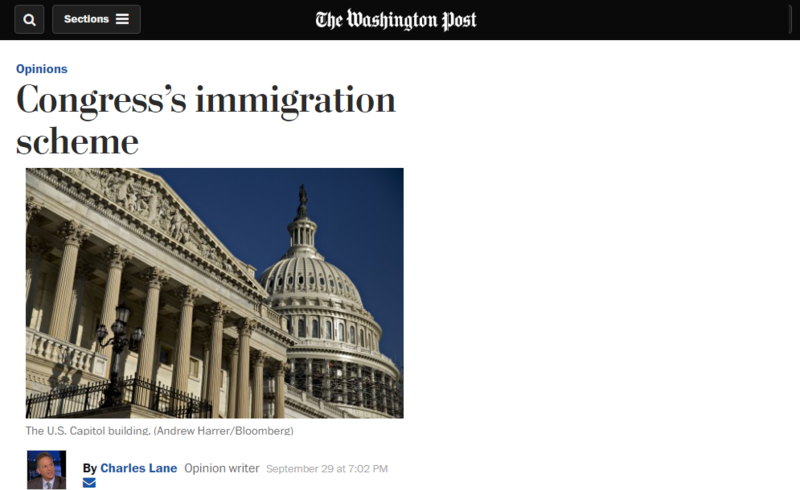 Only 19 percent of Americans trust the federal government to do what’s right most of the time, according to the Pew Research Center. And it’s hard to blame them, given that our Congress has just extended a 25-year-old visas-for-investment immigration scheme that has accomplished essentially nothing except to foster corruption, risk national security — and subsidize real estate developers.

The EB-5 program reserves up to 10,000 permanent residency slots each year for foreign nationals who invest in the United States. Congress enacted it in 1990 on the superficially plausible theory that trading green cards for capital would boost the economy, as a similar plan in Canada had reportedly done.

Before 2008, however, EB-5 produced more than 1,000 investor immigrants per year only once, due to competition from Canada, bureaucratic hassles and a lack of business opportunities fitting the program’s minimum requirements — $1 million invested and 10 jobs created. When admissions did go above 1,000, in 1997, the program was temporarily suspended amid concerns that fraud caused the spike.

Subsequent Congresses, and administrations of both parties, responded — by relaxing standards. Now visa seekers may invest passively in existing U.S. firms rather than start their own. They get credit for “indirect” job creation. They may put up as little as $500,000 if they do so in needy “targeted employment areas” — gerrymandered to include hot urban real estate markets. The government empowered an army of politically connected promoters, known as “regional centers,” to guide investors through the U.S. market for a fee.

EB-5 applications have surged; in fiscal 2015, 9,764 investors and their family members got visas. Much of their money flowed into developments such as Hudson Yards, a $25 billion office, retail, residential and park project in Manhattan that has so far attracted $600 million via EB-5. The program enables developers to raise “mezzanine” financing (the portion not accounted for by a mortgage or the developer’s own equity) at the equivalent of a 10 percent discount, according to Gary Friedland of the NYU Stern School of Business. EB-5 investors are in it for the visa, not the rate of return.

Most projects could have proceeded without the subsidy, Friedland argues, but if not, so what? There’d be less market distortion.

Some 85 percent of EB-5 investors in fiscal 2015 were from China, which is problematic, given the risk of money laundering: It’s hard to establish the ultimate source of investible funds emanating from that notoriously nontransparent economy. A 2015 Government Accountability Office report found that the Department of Homeland Security lacked the capacity to vet EB-5 applicants from China and elsewhere. DHS has detected people with possible intelligence connections to Iran attempting to access EB-5.

Then again, Donald Trump’s son-in-law and adviser, Jared Kushner, may be an expert on EB-5 already: His company is building a luxury, Trump-branded apartment building in Jersey City with $50 million raised in large part from Chinese EB-5 applicants.

In Vermont, meanwhile, the Securities and Exchange Commission has recently accused developers of bilking EB-5 investors out of hundreds of millions supposedly destined for a ski resort and other projects. A similar scandal erupted in Chicago in 2013.

EB-5 expansion spawned an EB-5 lobby, spreading campaign donations and boosterish information around Capitol Hill — such as a study commissioned by the “regional centers” showing that EB-5 investors contributed $3.58 billion to U.S. output and created more than 41,000 jobs in fiscal 2013.

Even if not hyped, these figures amount to less than 0.1 percent of gross domestic product and 1.9 percent of all jobs created that year. More to the point, they do not account for growth and jobs that might have occurred if all the American resources being poured into EB-5-stimulated projects had been deployed elsewhere.

“EB-5 costs taxpayers nothing!” the lobby cries. True — it amounts to a valuable gift to the private sector, in the form of influence over the government’s heretofore exclusive authority to admit immigrants.

For the government, EB-5 isn’t an unseemly business — selling visas — as critics sometimes protest. It’s a stupid business — giving them away and letting someone else sell them.

For the past year, Sens. Charles Grassley (R-Iowa) and Patrick Leahy (D-Vt.) tried to reform the EB-5 program or kill it, using as leverage the impending Sept. 30 expiration of the overall federal spending law to which EB-5’s key legal authorities had been attached.

But the lobby and its Capitol Hill allies successfully resisted, and the legal authorities were extended as part of the must-pass spending measure that passed Wednesday and expires on Dec. 9. EB-5 could well survive via similar maneuvering for years.

This might not happen in a country that legislated according to regular procedure, and on merits — a country like, say, Canada, which in 2014 terminated the investor visa program upon which Congress patterned EB-5.

It “provide[d] limited economic benefit,” an official statement noted, demonstrating that Canada’s government possesses yet another quality ours lacks: an ability to admit its mistakes.