Why Congress Will Extend The EB-5 Immigrant Visa Program 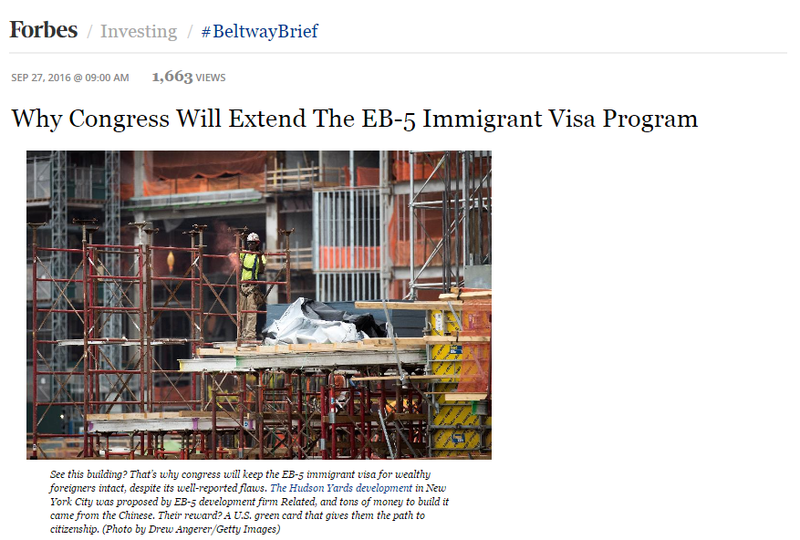 Congress will decide on Tuesday whether to make changes to an immigrant visa V +0.43% program that’s been bringing in thousands of foreign nationals since it was revamped in 2011. And while there has been ample focus on the number of companies set up to lure wealthy foreigners into projects that sometimes go bust, it seems to be the exception to the rule. The EB-5 immigration visa may be the best immigration program the U.S. has to offer.

Foreign investors — most of them from China — are putting up a minimum of $500,000 to renew and rebuild rundown urban areas and create jobs. It’s a legal way in for the kind of immigrant, a fortunate one, that tends to contribute to the neighborhood by bringing in money and jobs. In return, the investor, their spouses and their children under the age of 21 all get a green card.

This type of immigrant makes up a tiny portion of those coming into the U.S.  They are here legally. Why make it harder on them?

Moreover, if one of them wanted to hire a Mexican chef to run the kitchen at the Meat Market Steakhouse in Palm Beach — built with EB-5 visa money, by the way — then they can hire them and even get them a legal working visa. If this isn’t one of the best no-brainer, least controversial ways into the U.S., then what is?

“EB-5 has economic benefits that doesn’t stop at the five hundred thousand dollars they need to invest to participate,” says Julian Montero, a partner in the Miami law office of Arnstein & Lehr. “It’s just the beginning of a more significant investment that will be made by these families when the come here. They’re going to private schools. They’re making good income. They’re paying taxes. And most of them start other businesses once here.”

The EB-5 Visa program is managed but the United States Citizenship and Immigration Services department; the old INS so dreaded by foreigners who don’t have a half a million dollars to burn. UCSIS holds the applications and decides who gets in. Interviews with Embassies and Consulates, standard procedure in acquiring any type of visa, are part of the process. Roughly 10,000 visas are issued annually. China accounts for nearly 80% of them, Montero says.

No one believes for a second that the EB-5 program gets cut.

It has created an entire cottage industry. Cities, often in cahoots with developers like New York based Related, the company behind the massive multi-billion dollar Hudson Yard project in Manhattan, creates projects and works with agencies abroad to find qualified investors. Each investor must be attributed to at least 10 jobs.

The EB-5 has become a way for developers to attract foreign capital at low, project finance-style structured interest rates because the people giving the money are getting a prize: the right to live, work and study in the United States.

Individual entrepreneurs have teamed up with developers and city governments to create so-called EB-5 Regional Centers: private firms that bring projects and immigrant investor together.

“We have between 20 and 30 state wide in Florida,” says Roger Bernstein, principal and owner of the EB-5 for Florida Regional Center in Miami. “It might even be more. This whole concept of Regional Center has grown tremendously over the last five years. In 2007 there were maybe a dozen regional centers nationwide, and now I can say with certainty that the U.S. has well over 500 of them,” Bernstein says.

Are there problems with these centers? Yes there are problems. Some of these centers that sprang up to bring in American-dreaming investors lured them over a cliff. Two years ago, Fortune magazine published a long featureabout how a Chinese group soaked investors.

“Rampant fraud and abuse within the EB-5 Regional Center program prevents the program from serving its original purpose, which was to create jobs and direct capital to underserved areas starved for investment,” he said about the cottage industry supporting EB-5 programs. “The program needs to be reformed or it needs to end,” he said on Sept. 13.

Earlier this month, House Judiciary Chairman Bob Goodlatte (R-VA) and Ranking Member John Conyers (D-MI) introduced a bill to reform and reauthorize the EB-5 Regional Center program, which is up for renewal today. Vermont’s EB-5 program is one of those around the country that has been burned by suppose fraud, but that fraud was not perpetrated by the immigrants themselves. It was inflicted upon the immigrants by Americans legally authorized to run those centers in the first place. Why punish wealthy foreigners willing to put their money to work in the United States and create jobs?

In Vermont’s case, there was a reported $200 million bilking of immigrant investors involving the Jay Peak, Burke Mountain and other residential housing projects.

Then there is the fact that some of the money from Latin American, China and Russia may be from ill-gotten gains. It’s not always perfectly traceable.

Congress will likely pass on making any changes until Dec. 9. But by then it appears just as likely that the Obama government will leave further reforms to that law to either a Hillary Clinton or Donald Trump government to tackle.

Some of the proposed changes include increasing the minimum threshold for investment to at least $800,000. There is also some legislation in the works that would limit the 10,000 EB-5s to certain zones. In other words, 2,000 for rural projects, 2,000 for urban development, 2,000 for manufacturing, and so on.

Juan Soto, 47, used to own a construction materials company in Mexico City. He applied for an EB-5 visa in 2012. He heard about it through the U.S. Embassy in Mexico. He and 20 other investors put up $500,000 into a commercial property complex in the Miami Design district still under construction, run by a holding company called Florida Investment. He found out about the project through his lawyer, Montero, who put him in touch with me. The project is slated to be finished at some point in 2017.

“Me, my wife and my two kids all have green cards now,” he tells me in Spanish. When asked if he knows other wealthy Mexicans looking to get money out of Mexico, he said yes, citing security issues in the country.

“I have had good experiences with this program and my project has construction workers working, will have stores in there with people working. And it is undeveloped areas, not prime real estate zones,” he says. ”It’s an important program for people who are looking for legal routes to the U.S. I think U.S. politics may change it a bit. For sure Hillary Clinton would be better for EB-5. But I don’t think Trump will kill it either.”

EB-5 Investors should have certain English language capabilities so that they can adapt quickly in American environment. How do you expect they can contribute to society if they do not speak English. This is the key area that should be reformed.