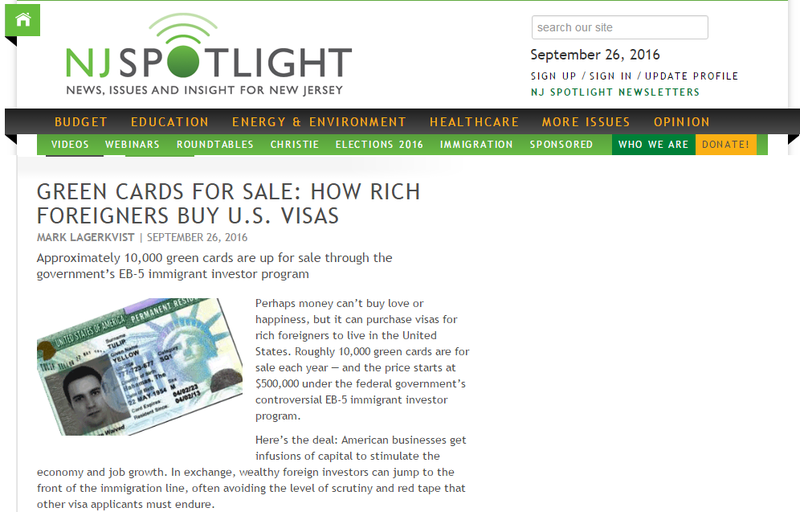 Approximately 10,000 green cards are up for sale through the government’s EB-5 immigrant investor program

Perhaps money can’t buy love or happiness, but it can purchase visas for rich foreigners to live in the United States. Roughly 10,000 green cards are for sale each year — and the price starts at $500,000 under the federal government’s controversial EB-5 immigrant investor program.

Here’s the deal: American businesses get infusions of capital to stimulate the economy and job growth. In exchange, wealthy foreign investors can jump to the front of the immigration line, often avoiding the level of scrutiny and red tape that other visa applicants must endure.

But EB-5 is under fire amid concerns over fraud, benefits, and national security during an election year in which immigration is a hot-button issue. Government Accounting Office reports, including ones this month and last year, have faulted regulators for lax oversight.

Unless Congress acts to extend EB-5, the program will end September 30, the close of the federal fiscal year.

The overwhelming majority of investor visas go to Chinese nationals. They received 83 percent of the 9,764 EB-5 visas issued last year.

To qualify for an EB-5 visa, an applicant must invest at least $1 million — or $500,000 in a high-unemployment area — toward a new commercial enterprise that will create or preserve at least 10 full-time jobs. If approved, investors and their dependents receive conditional resident status; they can apply for permanent status after two years.

The money often winds up in the pockets of even wealthier developers.

Trump sold the use of his name to Kushner. “This was a highly successful license deal but he is not a partner in the financing of the development,” a Trump representative told Bloomberg.

Developers have actively wooed EB-5 investors, who have flocked to a once-obscure pathway with promises of U.S. residency and equity. Other major undertakings include the Barclays Center in Brooklyn and Hudson Yards in Manhattan. The low-interest capital can save the developers countless millions in borrowing costs.

The EB-5 program was created by Congress in the Immigration Act of 1990. In 2001, the United States issued less than 50 visas to applicants who invested a total of $22 million.

The mystery is how much of that money actually benefits Americans workers. Because of the methodology used by Department of Homeland Security regulators, there are no reliable records on the number of jobs created by EB-5 investments.

“DHS allows foreign investors to receive credit for all the jobs to be created — even those paid by other people’s money,” testified Rep. Bob Goodlatte (R-VA), chair of the House Judiciary Committee.

“In one case, even though EB-5 funds accounted for only 18 percent of a project’s capital, foreign investors got to claim credit for all the jobs,” said Goodlatte. “This practice makes a mockery of the job creation goal of the EB-5 program.” Goodlatte and John Conyers (D-MI) have introduced a bi-partisan reform bill, H.R. 5992, to address some of the program’s shortcomings. The measure is being considered by the Judiciary Committee.