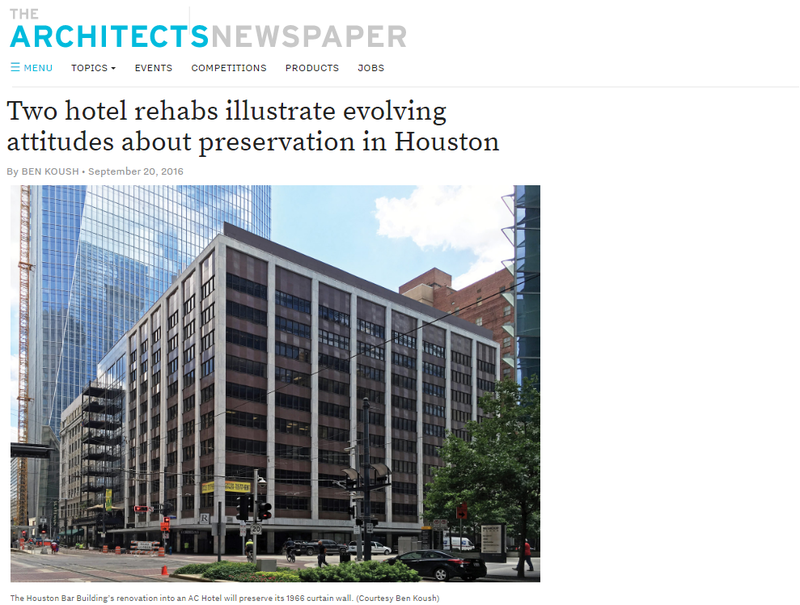 Two projects—one under construction and the other scheduled to start at the beginning of 2017—continue the trend of repurposing old buildings in downtown Houston. This movement began in the 1970s and accelerated in the mid-1990s when the city created a tax increment reinvestment zone for downtown coupled with tax breaks as incentives.

The 21-story Melrose Building (1952), originally designed by Lloyd & Morgan and the first modern skyscraper to be built in Houston, features horizontal bands of windows shaded by cast-in-place concrete brise-soleils. After languishing empty since 1991, it is now being converted into a Le Meridien hotel by the Beck Group, a Dallas-based construction and architecture firm for the Memphis, Tennessee, Development Services Group, Inc.

Assistance in funding the $80 million project came from a mixture of sources, including: $15 million from the federal EB-5 Immigrant Investor Program, which allows foreign nationals to essentially “buy” green cards by investing in job-creating businesses in the United States; the Federal Historic Preservation Tax Incentive Program, which provides tax credits equal to 20 percent of the income tax owed on qualified rehabilitation expenditures; and the Texas Historic Preservation Tax Credit Program, which gives credits equal to 25 percent of eligible rehabilitation costs. Key requirements of these credit programs are: The building must be listed on the National Register of Historic Places or a Recorded Texas Historic Landmark (the Melrose Building was entered in the National Register of Historic Places in September 2014), and the proposed remodeling work must follow the guidance of the Texas Historical Commission and the National Park Service. 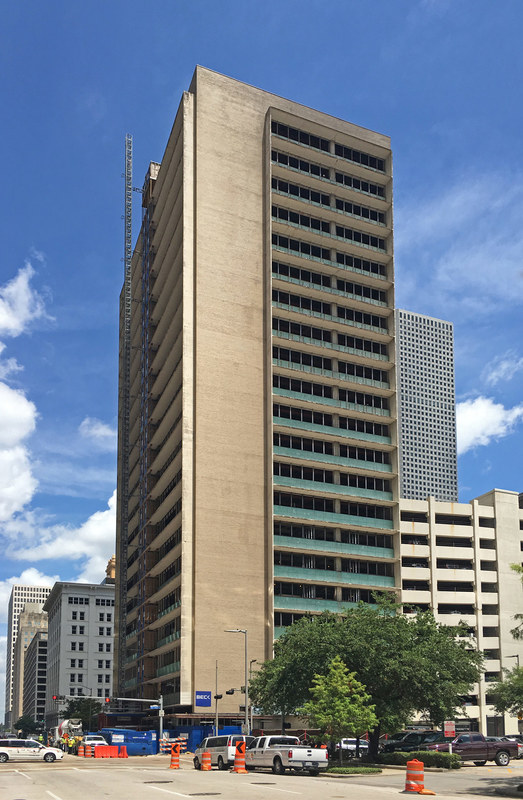 The exterior elevations will be restored to their original appearance. When the building was first completed, the spandrels below the clear vision glass were clad with turquoise tiles. In 1969, Lloyd & Morgan, who were commissioned to modernize its then 16-year-old building, proposed a modest update that entailed covering the tiles with bronze anodized aluminum panels and replacing the clear glass with bronze-tinted glass. These exterior changes are currently being reversed in the name of authenticity—that is to say, to erase the marks of time on the building and return it to a supposedly pristine state.

The second project is the conversion of the Houston Bar Building into an AC Hotel. This building, currently sheathed in dark-tinted glass and a granite panel curtain wall, is actually two adjacent 10-story buildings, the M.E. Foster Building (1914) and the Gulf Building (1916), both designed by architect Alfred C. Finn. In 1966, architect Eugene William Slater was tasked with the unenviable job of modernizing them to keep them competitive for leasing.

Slater stripped historical ornament off the exterior and interior of both buildings and sheathed them with a bronze-colored, reflective glass curtain wall. Inside he covered the elevator lobbies’ walls with panels of smooth, polished marble. The unified building was then renamed the Houston Bar Center in an effort to appeal to downtown lawyers. Although the Bar Center was never abandoned, it was looking tired, especially considering the new construction activity around it in the last few years, and was ripe for its second redevelopment, this time at the hands of Dallas-based hotel management firm NewcrestImage. The $44 million project is also in part supported by tax incentives. The Downtown Redevelopment Authority, which controls expenditures from the Downtown TIRZ, provided an economic development grant of 50 percent of the tax increment generated by the project site for the first 10 years, equivalent to approximately $1.2 million. Additional state and federal tax breaks are pending the building’s entry into the National Register, which is currently in process.

The developers claimed to be surprised that the Texas Historical Commission recommended not to go back to the 1914 and 1916 originals, but rather to rehabilitate the 1966 curtain wall. The logic for this decision was twofold: First, the slipcover is fifty years old, a critical threshold for historic consideration, and second, the building’s original facade was so damaged during Slater’s remodeling that the missing ornament would have to be almost entirely reconstructed. According to the developer, this will be the first time that such a slipcover has been intentionally preserved in Texas. This approach has raised the ire of no less an authority than architectural historian Stephen Fox who complained that the Texas Historical Commission was using “twisted logic to preserve a mediocre exterior.”

These two projects demonstrate the nimble maneuvers that developers and preservationists increasingly have to make as they knit together institutionalized funding incentives and a growing awareness of the importance of historical architecture—even in a city as notoriously anti-historical as Houston.