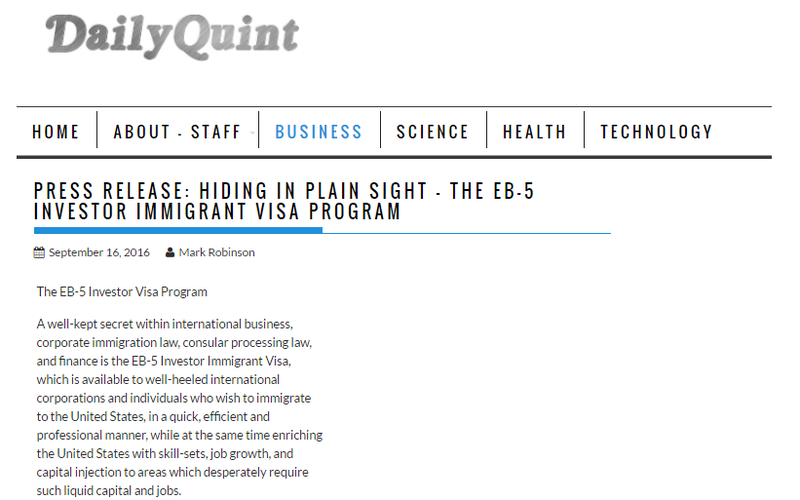 A well-kept secret within international business, corporate immigration law, consular processing law, and finance is the EB-5 Investor Immigrant Visa, which is available to well-heeled international corporations and individuals who wish to immigrate to the United States, in a quick, efficient and professional manner, while at the same time enriching the United States with skill-sets, job growth, and capital injection to areas which desperately require such liquid capital and jobs.

Investors using the EB-5 Visa will quickly find hitherto closed doors being swung wide open, as local, state and federal leaders will often facilitate the process in order to encourage economic growth and benefits to their constituency. However, the requirements of the EB-5 Investor Visa are very stringent and particular, and there are many rules and regulations governing their usage, and it is vitally important to retain the services of a competent, articulate, experienced Immigration Lawyer to help navigate through the thicket of the immigration and nationality laws.

USCIS administers the EB-5 Program. Under this program, entrepreneurs (and their spouses and unmarried children under 21) are eligible to apply for a green card (permanent residence) if they:  Make the necessary investment in a commercial enterprise in the United States; and Plan to create or preserve 10 permanent full-time jobs for qualified U.S. workers.

This program is known as EB-5 for the name of the employment-based fifth preference visa that participants receive.

Congress created the EB-5 Program in 1990 to stimulate the U.S. economy through job creation and capital investment by foreign investors. In 1992, Congress created the Immigrant Investor Program, also known as the Regional Center Program. This sets aside EB-5 visas for participants who invest in commercial enterprises associated with regional centers approved by USCIS based on proposals for promoting economic growth.

About the EB-5 Visa

The United States Citizenship and Immigration Service (“USCIS”) administers the EB-5 program, created by Congress in 1990 to stimulate the U.S. economy through job creation and capital investment by foreign investors. Under a pilot program enacted in 1992, and regularly reauthorized since then, investors may also qualify for EB-5 visas by investing through regional centers designated by USCIS based on proposals for promoting economic growth.

The EB-5 Adjudications Policy Memorandum is the guiding document for USCIS administration of the EB-5 program. It builds upon prior policy guidance for adjudicating EB-5 and is applicable to, and binding on, all USCIS employees.

Commercial enterprise means any for-profit activity formed for the ongoing conduct of lawful business including, but not limited to: A sole proprietorship, Partnership (whether limited or general), Holding company, Joint venture, Corporation, Business trust or other entity, which may be publicly or privately owned.

This definition includes a commercial enterprise consisting of a holding company and its wholly owned subsidiaries, provided that each such subsidiary is engaged in a for-profit activity formed for the ongoing conduct of a lawful business.

Note: This definition does not include noncommercial activity such as owning and operating a personal residence.

Create or preserve at least 10 full-time jobs for qualifying U.S. workers within two years (or under certain circumstances, within a reasonable time after the two-year period) of the immigrant investor’s admission to the United States as a Conditional Permanent Resident.

Create or preserve either direct or indirect jobs: Direct jobs are actual identifiable jobs for qualified employees located within the commercial enterprise into which the EB-5 investor has directly invested his or her capital.

Note: Investors may only be credited with preserving jobs in a troubled business.

A job-sharing arrangement whereby two or more qualifying employees share a full-time position will count as full-time employment provided the hourly requirement per week is met. This definition does not include combinations of part-time positions or full-time equivalents even if, when combined, the positions meet the hourly requirement per week. The position must be permanent, full-time and constant. The two qualified employees sharing the job must be permanent and share the associated benefits normally related to any permanent, full-time position, including payment of both workman’s compensation and unemployment premiums for the position by the employer.

Capital means cash, equipment, inventory, other tangible property, cash equivalents and indebtedness secured by assets owned by the alien entrepreneur, provided that the alien entrepreneur is personally and primarily liable and that the assets of the new commercial enterprise upon which the petition is based are not used to secure any of the indebtedness. All capital shall be valued at fair-market value in United States dollars. Assets acquired, directly or indirectly, by unlawful means (such as criminal activities) shall not be considered capital for the purposes of section 203(b)(5) of the Act.

A targeted employment area is an area that, at the time of investment, is a rural area or an area experiencing unemployment of at least 150 percent of the national average rate.

A rural area is any area outside a metropolitan statistical area (as designated by the Office of Management and Budget) or outside the boundary of any city or town having a population of 20,000 or more according to the decennial census.