US visa programme up for renewal amid allegations of fraud 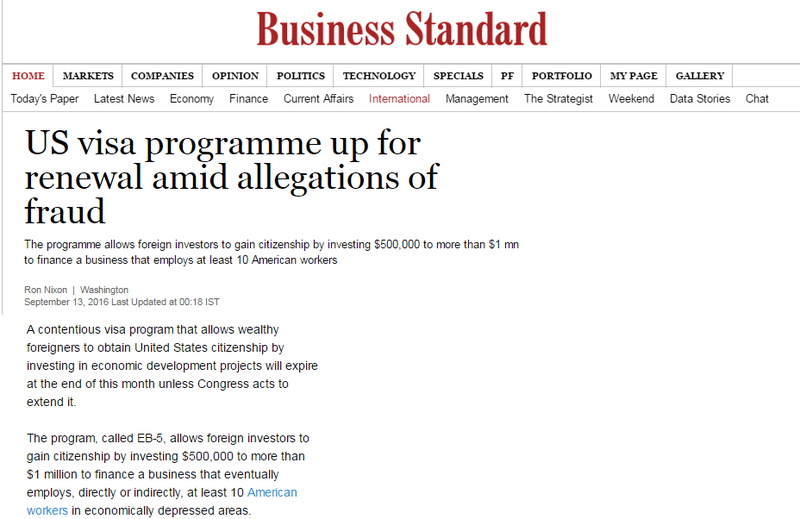 A contentious visa program that allows wealthy foreigners to obtain United States citizenship by investing in economic development projects will expire at the end of this month unless Congress acts to extend it.

The program, called EB-5, allows foreign investors to gain citizenship by investing $500,000 to more than $1 million to finance a business that eventually employs, directly or indirectly, at least 10 American workers in economically depressed areas.

Developers and supporters in Congress say the program, run by the Department of Homeland Security, has brought billions of dollars to areas that would otherwise not have access to capital.

But the program has been marred by fraud and used to build large projects in wealthier areas like Manhattan and the Las Vegas Strip instead of high-unemployment or rural areas. Federal investigators have also discovered that attempts to infiltrate the program were made by people with possible ties to Chinese and Iranian intelligence, and that international fugitives who laundered money in their home countries gained citizenship through the program.

More recently, federal prosecutors in April charged two Vermont developers, Ariel Quiros and William Stenger, with defrauding investors from at least 74 countries. Federal and state officials said the two raised $350 million through the EB-5 program for an array of projects including a ski resort.

According to a 52-count civil complaint filed by the federal Securities and Exchange Commission and a 15-count complaint by Vermont, the developers engaged in a "massive eight-year fraudulent scheme" in which they "systematically looted" millions of dollars from the foreign investors. Quiros was accused of using $50 million for personal expenses including a luxury condominium at Trump Place in New York.

Stenger announced in a statement this month that he had reached a settlement with the federal government. The case against Quiros is pending.

Critics of the EB-5 program, like Senators Charles E Grassley, Republican of Iowa, and Patrick J Leahy, Democrat of Vermont, see reauthorisation of the program as an opportunity to fix problems with how the money is used, increase oversight and address national security issues. They sent a letter on Thursday to Senate leaders opposing reauthorisation of the program without a significant overhaul.

"The program has become plagued by fraud and abuse and, if not reformed, it should be allowed to expire on September 30th," they wrote.

Proponents, including the United States Conference of Mayors, have urged Congress to leave the program intact, although they say they support some of the changes lawmakers are expected to consider.

"There is a need for more oversight and transparency," said Ronald R Fieldstone, a Miami lawyer who has been involved in using EB-5 funding for development projects. "If there is no independence in the administering and the distribution of the funds, it exposes the program to instances of fraud."

But Grassley and Leahy say other changes are needed.

The program, which was created in 1990, has expanded well beyond its original intent, they say. EB-5 requires an investment in either a rural area or a "targeted employment area," which is defined as an urban area with an unemployment rate of at least 150 per cent of the national average.

But Grassley and Leahy said developers had broadly defined these areas by adding a few low-income communities to wealthier neighborhoods so they could use EB-5 funding to build luxury condos, convention centers and hotels, amounting to what the senators said was economic gerrymandering.

Angelique Brunner, a Washington-based developer and spokeswoman for the EB-5 Investment Coalition, which is made up of investors and developers, said many of the examples that critics point to as EB-5 investments in upscale areas failed to note that the program helped transform places that were previously economically depressed.

"One of the challenges of EB-5 investment is that people look at what an area looks like after the investment," she said. "It's hard to convince them what it looked like before."

The EB-5 program has grown rapidly. About 10,000 visas are awarded annually, primarily to wealthy Chinese citizens, who make up about 80 per cent of the investors and see the program as an easier way to gain United States citizenship for themselves and their families.

Senator Dianne Feinstein, Democrat of California, said the EB-5 program has sent a terrible message to millions of immigrants waiting their turn to enter the United States through normal channels. A number of other members of Congress echo her concerns, in large part because while most visa applicants must meet education or work requirements, the primary requirement for the EB-5 program is a "lawful source of investment income," as a Homeland Security memo put it.

Many lawmakers say there are also national security concerns. A Government Accountability Office report released last year found that the agency could not be sure that money used for the visas was not coming from "the drug trade, human trafficking or other criminal activities."

Officials at Homeland Security Investigations, a division of Immigration and Customs Enforcement, said they were concerned that those who prepare overseas documents "may try to use increasingly sophisticated methods to circumvent" the program. In a 2013 memo, the agency suggested that the EB-5 regional center program end because "there are no safeguards that can be put in place that will ensure the integrity" of the regional center model.

United States Citizenship and Immigration Services, the agency that oversees the EB-5 program, said it was taking additional steps to increase the vetting of applicants for the program and its oversight of the regional centers The SEC said it would increase oversight as well.

Lawmakers have not said when they would take up the EB-5 reauthorisation. Last year, the program was extended as part of the omnibus spending bill.