Ad attacks Patrick Murphy for 'fighting for special interests, not us' 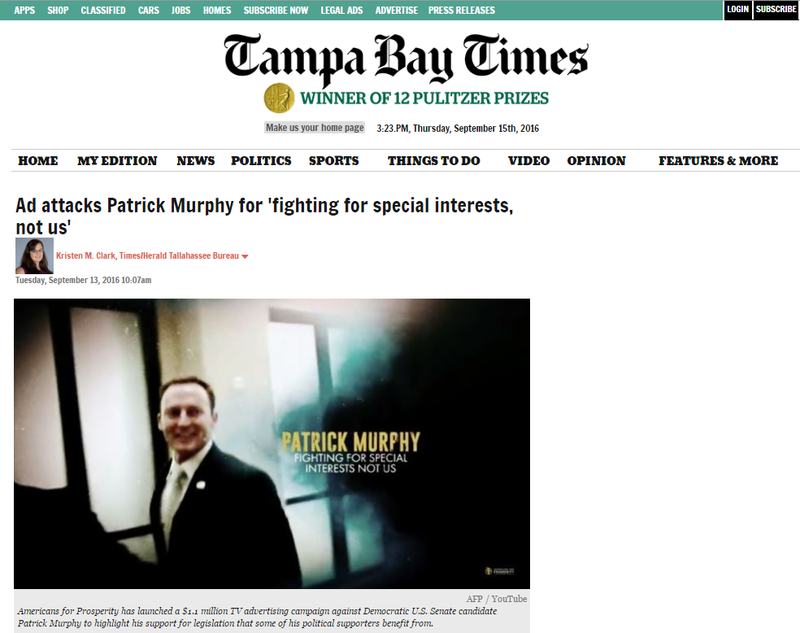 A national conservative group funded by the Koch brothers has launched a $1.1 million TV advertising campaign against Democratic U.S. Senate candidate Patrick Murphy to highlight his support for legislation that some of his prominent donors benefit from.

"Congress should work for us, but Patrick Murphy is hard at work lining the pockets of special interests," begins the 30-second ad from Americans for Prosperity.

It will run across several major media markets in Florida and follows a six-figure direct-mail campaign the group started over the weekend, along with other coordinated efforts against Murphy's campaign. AFP supports Murphy's opponent, incumbent Republican U.S. Sen. Marco Rubio.

The ad references Murphy's support for expanding the EB-5 visa program -- which has been used, in some cases, to help finance high-profile South Florida projects that have involved Murphy's family construction company and other Murphy campaign donors.

In response to the ad, Murphy campaign spokeswoman Galia Slayen said in a statement: "The only thing any Floridian can expect from Patrick is the best public servant he can be."

"This Koch brothers smear is especially ironic given that special interests are funding this attack to keep a senator like Marco Rubio, who votes with their priorities 98 percent of the time, in the U.S. Senate," she said.

Murphy two years ago co-sponsored legislation in the U.S. House to permanently extend the EB-5 visa program, which fast-tracks foreign investors and their immediate family for green cards when they fund projects that create jobs for U.S. workers.

The 2014 legislation died in committee, and Murphy has not co-sponsored a similar measure introduced during this session of Congress.

Meanwhile, the EB-5 visa program has been reauthorized for two decades, with bipartisan support. The permanent extension of it was also included in 2013 immigration reform legislation, which Murphy supported.

The connections between Murphy's support for the legislation and its benefit to Murphy's donors drew a formal complaint in June by a progressive blogger, who filed grievances with the the U.S. Department of Justice, the Office of Congressional Ethics and the Federal Elections Commission.