American dream just half a million dollars away 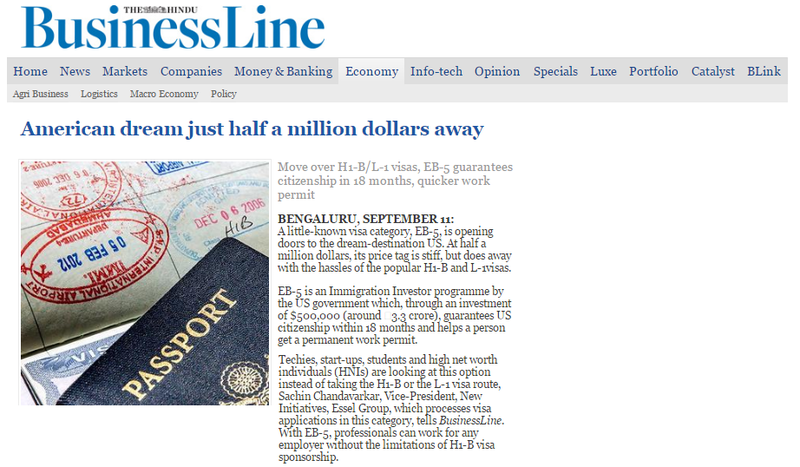 A little-known visa category, EB-5, is opening doors to the dream-destination US. At half a million dollars, its price tag is stiff, but does away with the hassles of the popular H1-B and L-1visas.

EB-5 is an Immigration Investor programme by the US government which, through an investment of $500,000 (around ₹3.3 crore), guarantees US citizenship within 18 months and helps a person get a permanent work permit.

Techies, start-ups, students and high net worth individuals (HNIs) are looking at this option instead of taking the H1-B or the L-1 visa route, Sachin Chandavarkar, Vice-President, New Initiatives, Essel Group, which processes visa applications in this category, tells BusinessLine. With EB-5, professionals can work for any employer without the limitations of H1-B visa sponsorship.

Sudhir Vedantham, who holds a PhD in mechanical engineering from the University of California, Berkeley, could not take up work with an American defence contractor. The reason, he says, was certain ‘sensitive’ parts of that project were “off limits for non-US citizens.”

A Green Card would have worked. But to land one it would, typically, take seven years and multiple H-1/L1 applications. This made him consider the EB-5 visa.

Ergo, the move to EB-5. The demand is such that, according to US Citizenship and Immigration Services (USCIS) data, in the January-March 2016 quarter, almost 25,000 visa applications have piled up.

Not just highly qualified individuals, even students see this as a good way to enter the US, and make use of subsidised tuition fees offered by different states to US citizens.

The US remains the world’s chosen destination for international students, and last year “the number from India alone surged 29.4 per cent to a record 132,888,” says Rajkamal Rao of education consulting firm Rao Advisors LLC.

Essel’s Chandavarkar says: “The fees are several thousand dollars less compared to the fees forked out by a non-US citizen.” Then there is the benefit of student loans at 1-2 per cent interest spread over 20-30 years.

The US government’s focus on science, technology, engineering and math, popularly known as STEM, is also an attraction.

“The US focus on this will see an influx of students and will play a role in adoption of this visa,” says Sujay Nair, an education consultant and start-up mentor to Bengaluru-based companies.

Every year, 10,000 immigrants are permitted entry into the US through the EB-5 programme.

Some of this clamour for US citizenship is due to recent job data, which increased 228,000 to a seasonally adjusted 5.9 million, according to the US Labour Department.