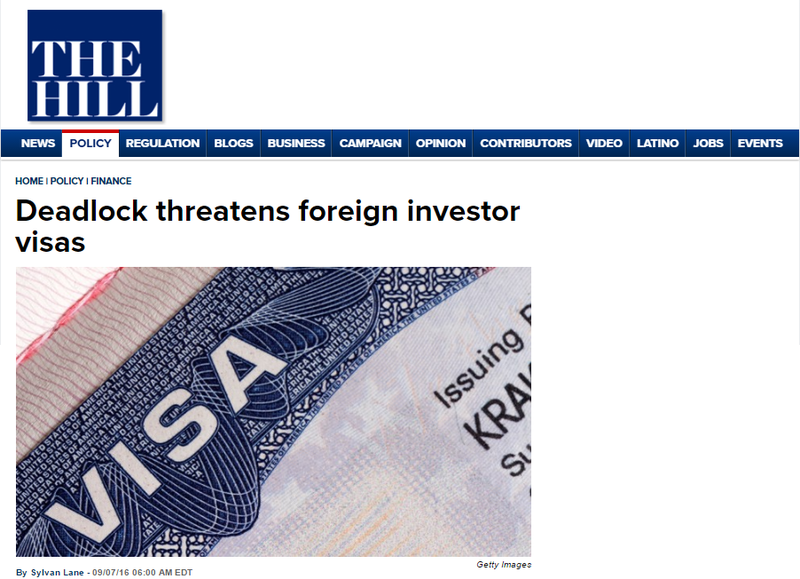 Billions of investment dollars are on the line as members of Congress seek to bridge their differences and save a visa program that is set to expire in October.

Riddled with controversy and fraud, the rapidly expanding -EB-5 investor visa program attracts money from foreign investors by giving them a path to American citizenship.

But the program’s future is uncertain. Power players in the Senate are at loggerheads over how to determine where the money goes, with less than a month to go until the program expires.

Congressional and businesses sources say lawmakers are nowhere close to a deal. Some of EB-5’s biggest critics in Congress are ready to walk away and let the program die without substantial reform.

Lobbyists for coalitions that support the visas say they have no clue what will happen come Sept. 30.

“There’s probably a deal out there somewhere to be made,” said a lobbyist representing businesses that support the visas. “I just don’t have any idea where this is going to end up.”

Created in 1990, the EB-5 program gives visas to foreigners who invest at least $500,000 in U.S. projects run by government-approved businesses called regional centers. These businesses can range from big-city high-rises and medical centers to rural agriculture and energy farms. When a project is completed, a foreign investor can earn permanent legal status.

The EB-5 program has exploded in popularity, with the number of visas granted jumping from 3,000 in fiscal year 2011 to more than 9,000 in fiscal 2014, according to data from the State Department.

The visa program was responsible for more than $15 billion in investment and 100,000 jobs between 2005 and 2010, according to a coalition of pro-EB-5 groups including the U.S. Chamber of Commerce and the Real Estate Roundtable.

The program is entering the final days of a nine-month extension included in December’s government funding bill. The extension salvaged the program at the eleventh hour after a reform effort backed by the chairmen and ranking members of the Senate and House Judiciary committees fell through.

Lawmakers and businesses mostly agree on several measures to crack down on fraud in the program and limit risks to national security. What they’re divided on is a provision aimed at attracting investment to lower-income areas.

The provision allows EB-5 investors to contribute smaller sums to projects within targeted employment areas, or TEAs. About 98 percent of EB-5 projects are located in TEAs, with lines drawn by state governments without federal guidance.

Senate Judiciary Committee Chairman Chuck Grassley (R-Iowa) and ranking Democrat Patrick Leahy (Vt.) want to direct more money toward poor and rural areas by redefining the guidelines for a TEA. They’ve teamed up with House Judiciary Committee Chairman Bob Goodlatte (R-Va.) and ranking Democrat John Conyers (Mich.) on a bill that would do just that.

Their bill was scrapped from December’s government funding bill after opposition from Sens. Charles Schumer (D-N.Y.), John Cornyn (R-Texas) and Jeff Flake (R-Ariz.). Their states boast billions in EB-5 investment in major cities and have argued that Grassley and Leahy’s proposal would favor rural over urban areas.

In addition, there is sparring over when several anti-fraud provisions would begin. Business advocates say they worry investors would lose money and projects would fail if projects already underway are not grandfathered into the new regulations.

“Senator Cornyn is working towards a consensus solution that strengthens the integrity of the EB-5 program while ensuring law-abiding job creators aren’t immediately shut down by the federal government,” said a spokesman for Cornyn.

Little is certain about what an agreement might look like. Sources say an extension would have to be uncontroversial enough to make it into a must-pass spending bill. Passing the program by itself would be time-consuming and could expose lawmakers to difficult votes on immigration amendments.

Speaker Paul Ryan (R-Wis.) and Senate Majority Leader Mitch McConnell (R-Ky.) are said not to be actively involved in the negotiations over the program. Sources say the leaders would need assurances that a fix wouldn’t divide their conferences or hold up necessary legislation.

A source with knowledge of Ryan’s thinking said the Speaker is waiting for his members to produce a consensus solution and would prefer to see the program continue.

Congressional sources expect negotiations over the program to pick up when lawmakers return from the summer recess. A deal is possible, advocates say, it’s just a question of how to get there.

“It’s a pretty big concern, but no one really knows what that might look like,” said the lobbyist.