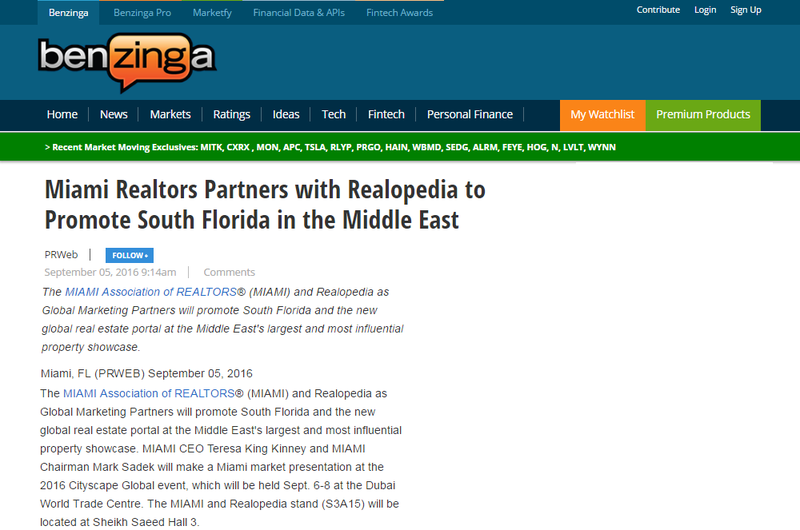 The MIAMI Association of REALTORS® (MIAMI) and Realopedia as Global Marketing Partners will promote South Florida and the new global real estate portal at the Middle East's largest and most influential property showcase. MIAMI CEO Teresa King Kinney and MIAMI Chairman Mark Sadek will make a Miami market presentation at the 2016 Cityscape Global event, which will be held Sept. 6-8 at the Dubai World Trade Centre. The MIAMI and Realopedia stand (S3A15) will be located at Sheikh Saeed Hall 3.

"The launch of a direct Miami-to-Qatar flight has increased Middle Eastern interest in South Florida real estate," Kinney said. "Investors and home buyers from Dubai and the United Arab Emirates love Miami's vibrant nightlife, art and international business center. The Middle East is part of an increasingly larger array of countries purchasing Miami real estate, and there is great synergy between Miami and Dubai."

International transactions play a significant role in the Miami real estate market. About 50 percent of all foreign transactions in Florida take place in Miami-Dade and Broward, and Florida is the top state in the nation for sales to global buyers.

The Dubai showcase is part of MIAMI's increased efforts to promote South Florida around the globe. In 2016, MIAMI has participated and/or exhibited and presented at MIPIM in France, FIABCI World Congress in Panama, Gran Salon Inmobiliario in Colombia, China North America Global Summit in China and NAR-India in India. This fall, MIAMI plans to participate and present at FIABCI France, the Salon National de l'Immobilier in Paris and InmoExpo in El Salvador.

The proposed 1,000-foot SkyRise Miami tower is another project of interest to UAE investors. SkyRise Miami is an EB-5 project, which grants permanent U.S. residency to investors who create at least 10 domestic jobs and contribute at least $500,000 to $1 million in a U.S. business venture. Step America, a Dubai-based company, is seeking SkyRise investors in the Middle East.

Driven by its sovereign wealth funds, the Middle East spent $2.7 billion on real estate in the Americas in the first half of 2015, according to CBRE. That's a large percentage of the $11.8 billion total that investors from the Middle East have spent on global real estate during that time period.

South Florida was the fourth hottest market in the United States for Middle Eastern investment during the first two quarters of 2015.

South Florida's vibrant nightlife, beaches, weather, shopping, booming real estate market and proximity to Latin America are why Dubai has increased its interest in Miami. The launch of a direct Miami-to-Qatar flight in 2014 increased ties between the two regions. Dubai homebuyers can now use their properties here more easily.

Dubai's Economic Growth
Like Miami, Dubai is a booming city that is a hub for global capital. Dubai is home to more than 20,000 international companies, including offices from 124 of the Fortune 500.

Dubai ranked as the eighth-most important city for the ultra-wealthy in 2015, according to the Knight Frank Wealth Report. Miami ranked No. 12 in the same report.

Dubai will host the 69th World Real Estate Congress in 2018. Dubai will also be home to the World Expo 2020, which will provide economic stimulus and enhance the city's global brand. Qatar will host the 2022 World Cup, one of the world's most significant sporting events.

Cityscape Global: The World's Top Property Showcase for Emerging Markets
Now in its 15th year, Cityscape Global is the largest and most influential real estate investment and development event for emerging markets.

More than 150 local, regional and international real estate firms are expected to exhibit their projects. Cityscape will host major developers such as Emaar, Dubai Holding, Nakheel, Meydan, Meraas, Dubai South, DAMAC, and Al Marjan Islands, as well as international exhibitors from 30 countries, including significant pavilions from Turkey, Bahrain, the UK, and new participants from Pakistan.