The Impact of Clashing Interests and Agendas on Real Estate Transactions 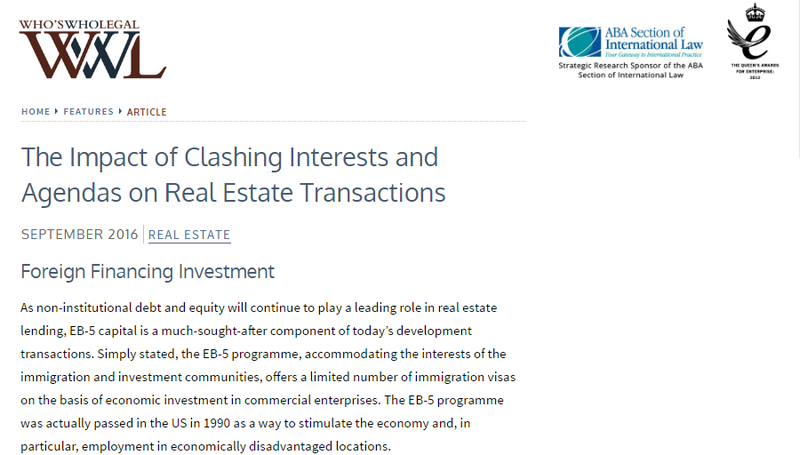 As non-institutional debt and equity will continue to play a leading role in real estate lending, EB-5 capital is a much-sought-after component of today’s development transactions. Simply stated, the EB-5 programme, accommodating the interests of the immigration and investment communities, offers a limited number of immigration visas on the basis of economic investment in commercial enterprises. The EB-5 programme was actually passed in the US in 1990 as a way to stimulate the economy and, in particular, employment in economically disadvantaged locations. However, with the capital tightening during the global recession, and developers seeking alternative sources of capital, the boundaries of the “disadvantaged locations” grew. EB-5 capital became available for development projects in upper-class neighbourhoods to the advantage of developers’ interests, but not to the public interest. In any event, despite the controversy, according to the US Citizenship and Immigration Services (as reported by Invest in the USA, a not-for-profit industry trade association for the EB-5 Regional Center programme), annual investment of EB-5 exploded from US$320 million in 2008 to US$4.38 billion in 2015; total investment during that time has been in excess of US$13 billion.

The public interest in expanding EB-5 investment is ironically intertwined with regulatory efforts to tighten the availability of bank capital for development deals. The cost of EB-5 capital is typically so low when compared to that available from debt funds, that it is very attractive to developers. However, in order to fit within the structures required by the HVCRE rules, EB-5 investment is pushed into either a preferred equity or, where a developer otherwise has the required 15 per cent capital invested, a mezzanine lending structure. In both instances, senior lenders are becoming more concerned about the execution of EB-5 syndicators successfully raising funds and often require changes to their loan structures in order to permit and monitor the capital investment by the EB-5 facilitator. It is not uncommon for the complexity and cost to be even greater than “traditional” mezzanine and preferred equity structures.

What is perhaps more troubling is the absence of a proactive regulatory environment that anticipates EB-5 investment. Certainly, the new HVCRE rules have succeeded in increasing the financial equity investment of a developer, making it less likely a developer will abandon a project mid-construction. However, the EB-5 rules are effectively forcing a marriage of these same developers with investors who may not have pockets sufficiently deep to contribute additional capital if a project becomes troubled, the economy falters or demographics underlying the construction project change. Simply put, by encouraging developers to align themselves with EB-5 investors in unanticipated ways creates a risk that the incentives being fostered by Dodd-Frank and Basel III will be undermined.

Unfortunately, rather than the US Congress seeking to better align the capital investment rules of EB-5 with the financial reform acts of Dodd Frank and Basel III, current efforts to improve EB-5 investments appear directed at securities compliance and solicitation – but not (as alternative or in addition) requiring that EB-5 investors be willing and able to make additional capital calls in the face of a financial downturn.