Startups, It's Time To Live That American Dream Again 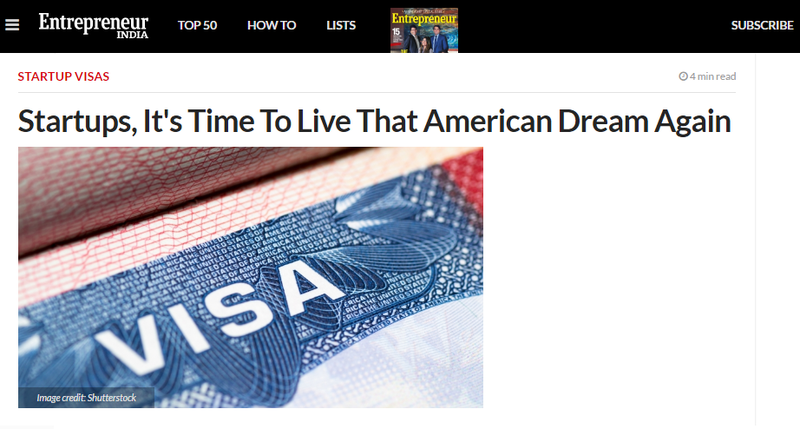 However gloomy America’s path to greatness might look, with the US Presidential Elections due this November, it sure is paving way for immigrant entrepreneurs to have an ease of doing business in the country.

Giving away his last gifts, the Obama administration on Friday announced a new rule that would allow certain international immigrant entrepreneurs to come to the United States and start their businesses. Can’t help, but smile thinking how mad this rule would make Trump!

Proposed by U.S. Citizenship and Immigration Services (USCIS), the Department of Homeland Security (DHS) will be allowed to use its existing discretionary statutory parole authority for entrepreneurs of startup entities, whose stay in the United States would provide a significant public benefit through the substantial and demonstrated potential for rapid business growth and job creation.

Under the International Entrepreneur Rule, entrepreneurs may be granted an initial stay of up to two years to oversee and grow their startup entity in the United States.  A subsequent request for re-parole (for up to three additional years), would be considered only if the entrepreneur and the startup entity, continue to provide a significant public benefit, as evidenced by substantial increases in capital investment, revenue or job creation.

“America’s economy has long benefitted from the contributions of immigrant entrepreneurs, from Main Street to Silicon Valley,” said Director León Rodríguez. “This proposed rule, when finalized, will help our economy grow by expanding immigration options for foreign entrepreneurs who meet certain criteria for creating jobs, attracting investment and generating revenue in the U.S.”

And revenue generation is rightfully expected given that 40% of Fortune 500 companies were started by immigrants or children of immigrants. The Obama government is ambitiously eyeing at least 3000 entrepreneurs with the stamp of American ‘startup visa’ in their passports.

The rule will hopefully be enacted by the end of Obama’s presidential term in January, because if not, the rule foresees an ambiguous future. Where on one hand Hillary Clinton is all game for startup visas for entrepreneurs and has pledged to “staple” green cards for master’s and Ph.D. graduates in the fields of science, technology, engineering and mathematics, Republican Donald Trump havehad his share of doubts in the past, regarding immigrants entering the States, and taking away jobs from Americans.

What’s in it for India entrepreneurs?

Like any other immigrant, Indian entrepreneurs investing in businesses in the US too were offered all the benefits of US EB5 visa. However, this rule is more restrictive and requires a minimum investment in the US of $1 million. The new rule, which is up for 45 days of public discussion, will allow entrepreneurs to stay for two years if they qualify by owning at least 15 per cent of their company and having raised at least $345,000 from established U.S. startup investors or $100,000 from government agencies.

They may stay an additional three years if they retain 10% of their business (which must remain in the U.S.) and either raise $500,000 from investors, generate $500,000 in annual revenue with at least 20% growth or create 10-full time jobs. After that, entrepreneurs can apply to stay longer through existing visas.

Investor Apoorv Ranjan Sharma, co-founder of Venture Catalysts, thinks of this rule as a welcome move for Indian entrepreneurs. “Credible and funded Indian startups who can seriously make a difference in the foreign country are always seems to be worried about their visa status,” he said. “Such inhibitions fears startups to scale further knowing the time limit. However the new rule proposed which seems to be coming a little later will at least provide the bandwidth for promising Indian startups to deal with documentations, get better access to newer rounds of funding, easy exits and build connects.”