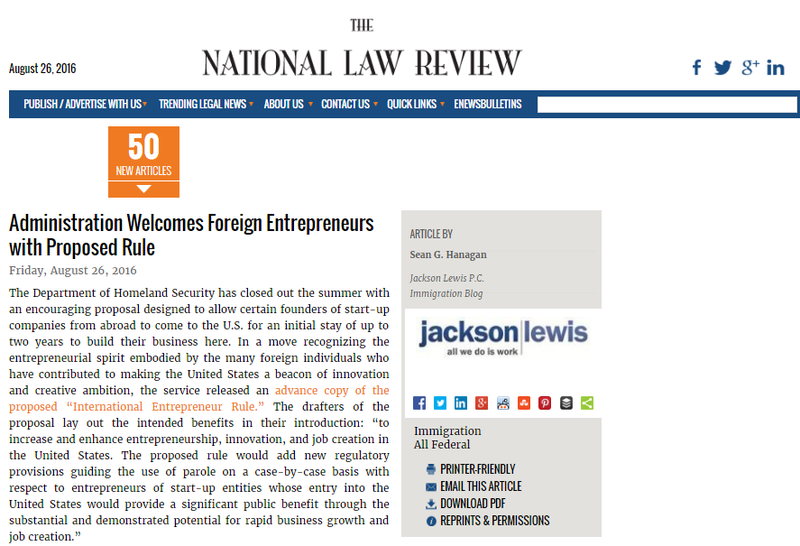 The Department of Homeland Security has closed out the summer with an encouraging proposal designed to allow certain founders of start-up companies from abroad to come to the U.S. for an initial stay of up to two years to build their business here. In a move recognizing the entrepreneurial spirit embodied by the many foreign individuals who have contributed to making the United States a beacon of innovation and creative ambition, the service released an advance copy of the proposed “International Entrepreneur Rule.” The drafters of the proposal lay out the intended benefits in their introduction: “to increase and enhance entrepreneurship, innovation, and job creation in the United States. The proposed rule would add new regulatory provisions guiding the use of parole on a case-by-case basis with respect to entrepreneurs of start-up entities whose entry into the United States would provide a significant public benefit through the substantial and demonstrated potential for rapid business growth and job creation.”

Under the current framework, foreigners wanting to build businesses in the United States must navigate a complex set of visa categories, each of which contains significant limitations. For example, B-1 business visitor status allows foreign businesspeople to enter the country for a much shorter timeframe (typically six months, extendable), and restricts them to non-employment activities; the E-2 investor visa category is only available to individuals holding select nationalities where a bi-lateral treaty exists with the U.S.; and the EB5 “green card investor” visa category requires the foreign individual to put from $500,000-$1,000,000 at risk to qualify. If implemented, the proposed “International Entrepreneur Rule” would provide two years (extendable to five years) of stay in the U.S. to establish and grow a business with a much lower financial commitment ($345,000 capital requirement, which may include investment from qualified U.S. persons or government grants of at least $100,000, or some combination thereof). Under the rule, international entrepreneurs must maintain an active role in the business and at least 15 percent ownership of the enterprise, two requirements that should not present an issue for most new company founders.

While the public must await publication of the proposal in the Federal Register to submit comments within the 45-day comment window, immigration and business advocates can together celebrate the agency’s attention to this fundamental component of maintaining America’s competitive advantage, today and into the future.