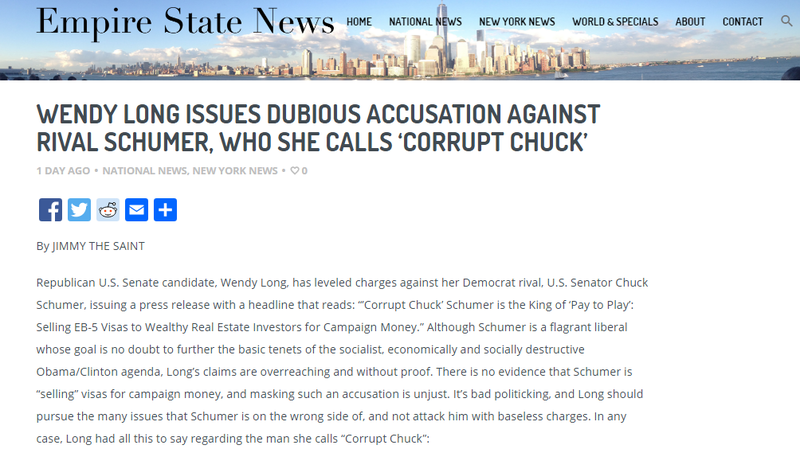 Republican U.S. Senate candidate, Wendy Long, has leveled charges against her Democrat rival, U.S. Senator Chuck Schumer, issuing a press release with a headline that reads: “’Corrupt Chuck’ Schumer is the King of ‘Pay to Play’: Selling EB-5 Visas to Wealthy Real Estate Investors for Campaign Money.” Although Schumer is a flagrant liberal whose goal is no doubt to further the basic tenets of the socialist, economically and socially destructive Obama/Clinton agenda, Long’s claims are overreaching and without proof. There is no evidence that Schumer is “selling” visas for campaign money, and masking such an accusation is unjust. It’s bad politicking, and Long should pursue the many issues that Schumer is on the wrong side of, and not attack him with baseless charges. In any case, Long had all this to say regarding the man she calls “Corrupt Chuck”:

“Chuck Schumer is King of ‘Pay to Play’ in the corrupt, rigged system of Washington, D.C. Today’s example is how he exploits immigration law for wealthy real estate developers through the EB-5 visa program, which allows investors to pay $500,000 in exchange for a green card, in return for plenty of campaign cash given back to him.

“The whole idea behind the EB-5 visa was to help create jobs in economically disadvantaged areas. But where big bucks are involved, corruption soon follows, and with Chuck Schumer and the EB-5 visa program, you need to follow the money.

“This is an arrogant and offensive statement. Small businesses are struggling in what Schumer calls ‘poor people areas.’ Schumer’s benefactors don’t need the help because they’re developing some of the most valuable real estate in the world. This is a moment for honest liberal Democrats to insist that Schumer stop writing off the poor while filling his campaign coffers from well-connected big corporations, wealthy foreigners, and lobbyists.

“As Senator Patrick Leahy has correctly observed, the gerrymandered Schumer use of EB-5s benefits wealthy Manhattan condo projects, many of which ‘would be pursued regardless of EB-5, calling into question whether the EB-5 capital is creating any jobs at all’.

“The immigration laws of the United States should not be used to buy and sell political favors,” said Long. “I would end the EB-5 program altogether if we cannot establish that it can be used only to bring development to impoverished places where it otherwise truly would not occur under normal American market forces. In midtown and downtown Manhattan, that is clearly not the case.”

Wendy Long is a gutsy woman, in taking on Schumer after she had previously ran a losing campaign against New York’s other U.S. senator, Kirsten Gillibrand. With little economic and other support from the national Republican party – and New York state party for that matter – she needs to be crafty in her campaigning to have even a slim chance of defeating one of the nation’s most well-funded politicians. Long has a largely smart and morally principled platform. Including unfounded, borderline-defamatory charges against Schumer, however, should not be part of her repertoire. And it’s not an excuse that “everybody does it.” The truth is that nearly all politicians do engage in this type of flippant dirt peddling. But Long – and all other political long shots – should rise above this. And then they can have effective claims of truly being outsiders who are not part of a rigged, corrupted system.