Birth Tourism + EB-5 Fraud, All in a Single Case 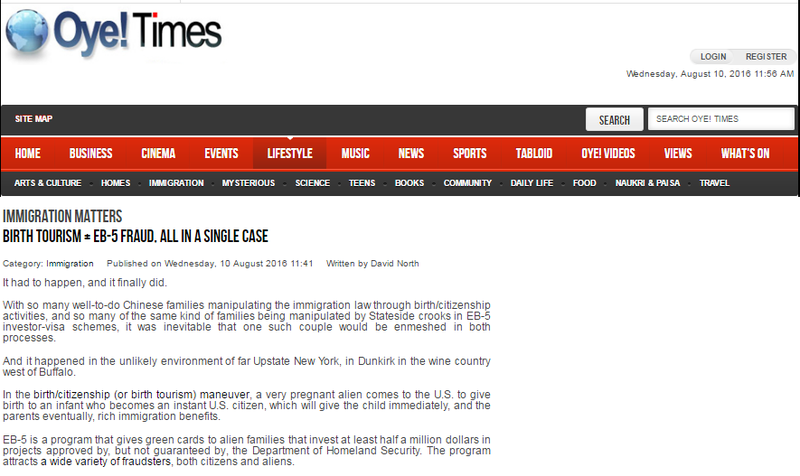 With so many well-to-do Chinese families manipulating the immigration law through birth/citizenship activities, and so many of the same kind of families being manipulated by Stateside crooks in EB-5 investor-visa schemes, it was inevitable that one such couple would be enmeshed in both processes.

And it happened in the unlikely environment of far Upstate New York, in Dunkirk in the wine country west of Buffalo.

In the birth/citizenship (or birth tourism) maneuver, a very pregnant alien comes to the U.S. to give birth to an infant who becomes an instant U.S. citizen, which will give the child immediately, and the parents eventually, rich immigration benefits.

EB-5 is a program that gives green cards to alien families that invest at least half a million dollars in projects approved by, but not guaranteed by, the Department of Homeland Security. The program attracts a wide variety of fraudsters, both citizens and aliens.

Playing both the manipulative and manipulated roles were Bo Zhang and his wife Yan Li, wealthy residents of China, who, according to federal court records, do not speak a word of English. Those ruled by a federal court to be cheating the first couple, through a variety of techniques, were Daniel Lucariello and his Mandarin-speaking wife, Sisi Ge. That couple owns the North County Beautification Company in Dunkirk.

A decision in a civil case brought by Zhang and Li was issued by the U.S. District Court for the Western District of New York earlier this month; in it the Dunkirk couple was told to repay the Chinese couple more than $180,000 that they had paid in connection with what the latter hoped would be a set of EB-5 visas. The court files can be seen in PACER, the federal courts' electronic document system, as case 1:12-cv-00721-MJR.

Li and Ge knew each in years past in China. Li and Zhang were interested in using the EB-5 program, and Lucariello and Ge said that they knew all about it, and could help the Chinese couple through the process, even though neither of the Dunkirk residents were lawyers, nor did they own a DHS-licensed regional center which routinely processes these visas and the related investments.

Li and Zhang paid more than $180,000 for their "help" with the program when they were visiting the U.S., in the winter of 2011 and spring of 2012. They were, at the time, guests of the Dunkirk couple and totally dependent on them for supportive services, as there are, according to the complaint, few Mandarin-speakers in Dunkirk. It was during this period that Li gave birth.

The Chinese couple used a Wall Street law firm, Dacheng Law, in the filing of the successful suit, with Eugene Meyers being noted as the lawyer filing the civil suit.

Increasingly Chinese nationals stung by EB-5 scandals are suing, and winning such cases.

Neither what press coverage we have seen, nor the complaint itself, links the birth/citizenship element to the EB-5 fraud. The birth of the (unnamed) baby is only mentioned in passing in the complaint.

Zhang and Li were total winners in the case. They have a nearly-five-year-old U.S.-citizen child, and they got their money back.

Whether the couple subsequently completed an EB-5 deal somewhere else is something not mentioned in the civil complaint, which describes Zhang as a "Chinese citizen and a resident within the People's Republic of China."