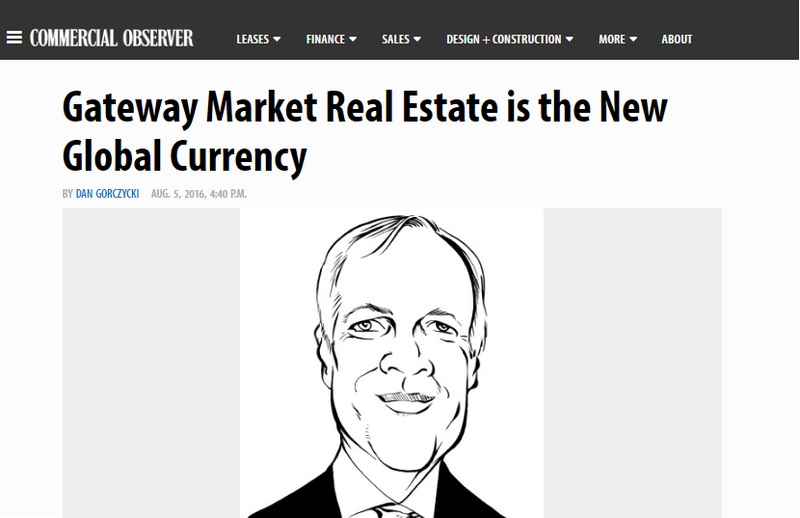 With the doom and gloom that besiege us in the news these days, the financial markets gyrate and roil with every move. For real estate located in gateway markets (universally defined as New York, Los Angeles, Washington, D.C., Chicago and Boston), however, this only serves to bolster their role as safe havens. This is not a new phenomenon by any means since, for over a decade, Asian investors have been gravitating toward these cities to buy office buildings, apartments and condominiums, especially in New York City, instead of paltry yielding government bonds.

Price seems not to be of paramount importance with return on investment being secondary to return of investment.

Real estate in gateway markets is technically not currency; but it is a hard asset that preserves its value and is not at the whim of federal budget deficits, currency devaluations or currency confiscation. Precious metals were thought to be the primary alternative, but they have only caught a slight bid from the masses.

The Chinese, in particular, have turned up their efforts in acquiring gateway city real estate. According to CCTV, total Chinese investment in U.S. real estate in 2015 was $110 billion with notable transactions including Anbang’s purchase of both the Waldorf Astoria Hotel and 717 Fifth Avenue; Fosun’s acquisition of One Chase Plaza and 15 East 30th Street; and Kuafu Properties buying on West 42nd Street and East 86th Street. Numerous articles in early 2016 heralded how the Chinese were cooling on real estate. But then, during a single month in 2016 (March), China’s investment in U.S. real estate totaled $28.6 billion. This figure doesn’t even count the Chinese money that comes in indirectly through the EB-5 program or through single-entity LLC shell companies that buy luxury condo units. And the Chinese aren’t the only ones swarming to the gateway markets; Brazilians, Argentinians, Canadians, Taiwanese, Russians and Koreans have also made headline purchases in these gateway markets to park money in real estate. Residential has seen its share of foreigners parking money with Fawaz al Hokair buying a unit at 432 Park Avenue for $95 million along with scores of other buyers in the $10 million to $50 million range.

What’s the driving force behind this?

Let’s call it the Brexit Syndrome. When events like a nonbinding Brexit vote can lop almost 10 percent off of a currency’s value overnight, the motivation to use real estate as currency becomes apparent. Back in the 20th century, there was always a strong currency alternative: the Yen, the Swiss Franc, the Deutsche Mark were safe options. Now all currencies have their own set of problems and government deficits from the Japanese yen to the Euro to the British Pound to the Chinese yuan.

There is one caveat to the continued Asian purchases. The Chinese government’s recent crackdown on corruption or the freeze on the Malaysian state investment fund assets has caused some foreign investors to get skittish. This is just a hypothesis at the moment, but it is worth monitoring if China gets serious about not allowing capital to flee its borders as it did in decades past. Could art sales falling 27 percent in the first half of 2016, according to Christie’s, be the canary in the coalmine?

Longer term, it’s just a matter of time until monetary policy, which is driving all countries to essentially print money, causes repercussions with drastic effects. Century-old economic theories have been violated with ZIRP and now NIRP ($13.5 trillion globally now trades at a negative interest rate, according to Zerohedge) that printing money will crash one’s economy and currency. It hasn’t happened yet, but it is becoming apparent that this will cause BIRP (Bubble Interest Rate Policy—source: Paramount Capital Corp). The theory is that the debt won’t seem as daunting if asset values all get bloated. The net effect will be to inflate hard asset alternatives simultaneously around the globe—precious metals and top-tier real estate being preferred. For many shrewd investors, it will be real estate in gateway markets that will be the new currency. The smart money is already in, and they aren’t selling.

Dan E. Gorczycki is a senior director for Avison Young New York in the Debt, Joint Venture and Structured Equity Group where he raises debt and equity for investors globally.