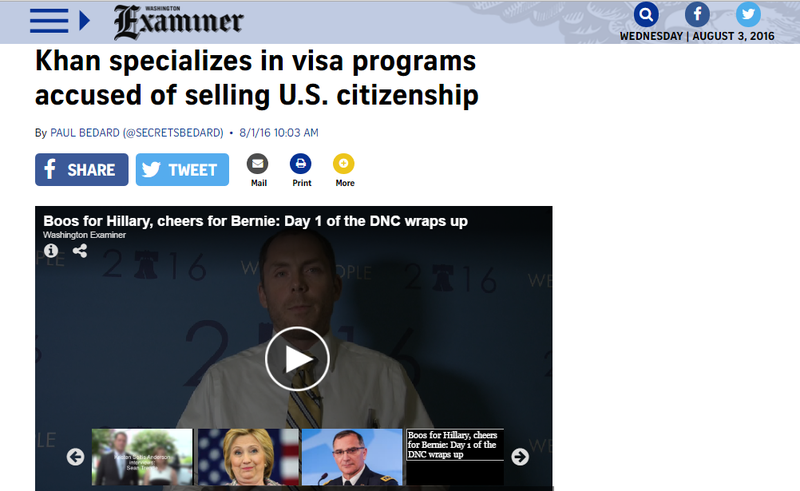 The father of a Muslim-American soldier killed in Iraq who is caught up in a war of words with Republican presidential candidate Donald Trump is an immigration lawyer who specializes in a highly controversial program accused of letting immigrants buy their way into the U.S.

Khizr M. Khan's website notes that he works to help clients with the E-2 and EB-5 programs that let overseas investors buy into U.S. companies and also provides green cards for family members.

It also said that he helps in the purchase of U.S. real estate and businesses. The website lists his ability to practice in New York, though it gives a Washington phone number for the lawyer who lives in Virginia. A man who answered the phone said the website was correct, though he would not identify himself.

"The E-2 and EB-5 are two of the most notoriously abused visa categories that essentially allow wealthy foreigners to buy their way to U.S. residency, and possibly citizenship, with a relatively modest investment," said Jessica Vaughan, the policy director for the Center for Immigration Studies.

The EB-5 program has been caught up in multiple scandals and critics are pressing Congress to kill it.

One criticism is that it allows an immigrant to invest $500,000 in an approved type of business and in return get a set of green cards for the investor, the investor's spouse, and all their under 21-years-of-age children.

Other documented problems include foreigners getting fleeced in fraudulent schemes to help them invest in the U.S.

The Center for Immigration Studies has written several reports on problems with the green card investor program.

Khan also offers other immigration services, according to his website: