Proposed Medical Facility for Chinese Tourists in Auburn Behind Schedule 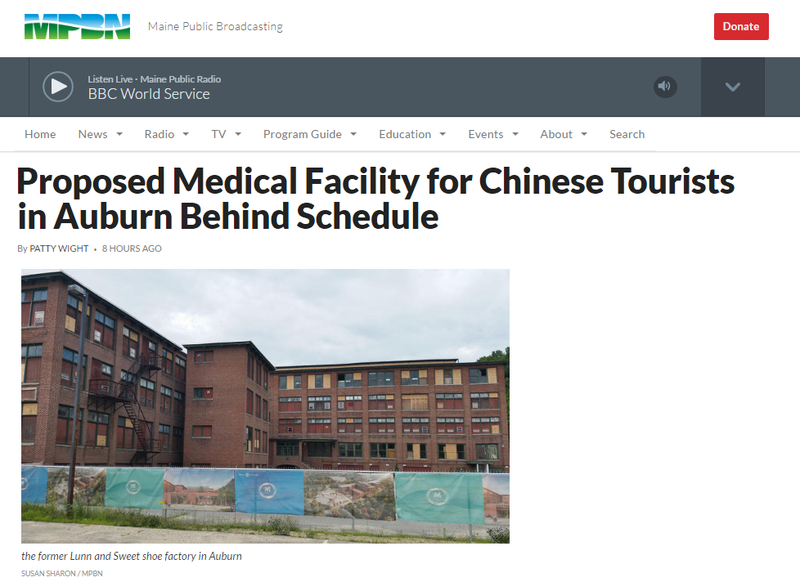 A year ago this week a Chinese investment company called a news conference to announce big plans to convert a former Auburn shoe factory into a 5-star medical tourism facility.

City, state, and hospital officials praised the project and its potential for economic development. The goal was to open the medical tourism center in 2017, but it appears it will take awhile longer for the project to come to fruition.

Draped over the fence outside the former Lunn and Sweet shoe factory in Auburn, banners display artist depictions of what the future facility might look like. But aside from the banners and some fencing outside, not much else at the site appears to have changed since last year’s announcement by Chinese investment company Miracle Enterprise.

Auburn Mayor Jonathan LaBonte says the press conference may have been a bit premature.

“But word had gotten out that they had acquired the former shoe shop, so a public announcement was put together so people could know what was being proposed,” he says.

That proposal is a 200-room recovery center that will cater to wealthy Chinese tourists seeking medical care. Those with known health conditions can stay at the center while getting treatment at Central Maine Medical Center for things like cancer and diabetes. Those seeking elective health care, such as anti-aging treatments, will get a work-up upon their arrival, said Miracle Enterprise representative Michelle Xu during last year’s press conference.

“So that would include physical examination or stem cell analysis, or genetic analysis and testings, and after all of that is done, we’ll be able to analyze the health condition of the patient and what he or she needs,” she says.

Since the announcement, LaBonte says, Miracle Enterprise has been working in China to attract investors.

“That work on a 40-plus millon-dollar project — that’s just the construction side of the building — was likely going to take time,” he says.

Meanwhile, LaBonte says, the city of Auburn is doing what it can to create the necessary infrastructure to support development at the old shoe factory.

As LaBonte looks for funding at the state and federal level to support infrastructure improvements, Central Maine Medical Center CEO Peter Chalke says the hospital is a partner in the medical tourism project and is doing its part to prepare.

“We have a clinical affiliation with Mass General,” he says. “As you might expect, they see about 2,000 foreign patients a year from 100 different countries.”

Chalke says he spent a day at Massachusetts General a couple months ago to learn how CMMC can support foreign patients, and he says he has been in regular touch with a contact for Miracle Enterprise. But that 2017 deadline? Chalke says it’s unrealistic, though he’s confident the medical tourism center will come.

One thing that could spur the project along is Maine’s hoped-for designation as an EB-5 regional center. EB-5, explains John Endicott of the Finance Authority of Maine, is a federal program designed to attract foreign investors in local economies.

“With every $500,000 investment a foreign investor makes in an approved project, they must create 10 jobs as well,” he says.

In exchange, those investors get expedited consideration for a green card.

Endicott submitted an EB-5 application for Maine last December. It can take a year for the federal government to process applications, but Endicott is optimistic Maine will be approved.

If so, he says, the Finance Authority will offer to work with Miracle Enterprise to help them take advantage of the program.