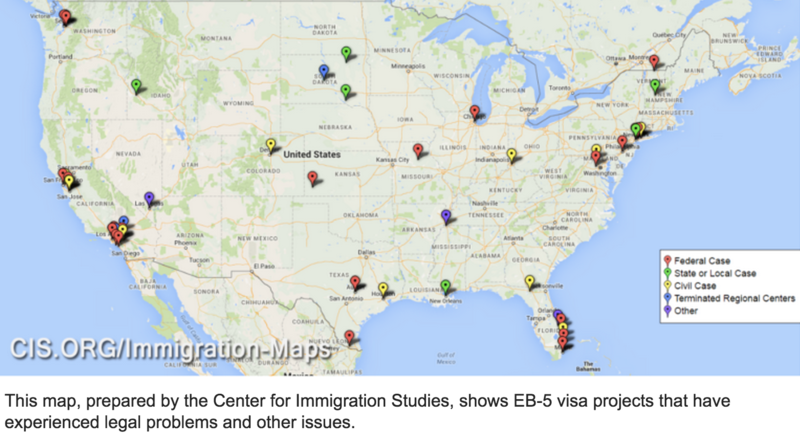 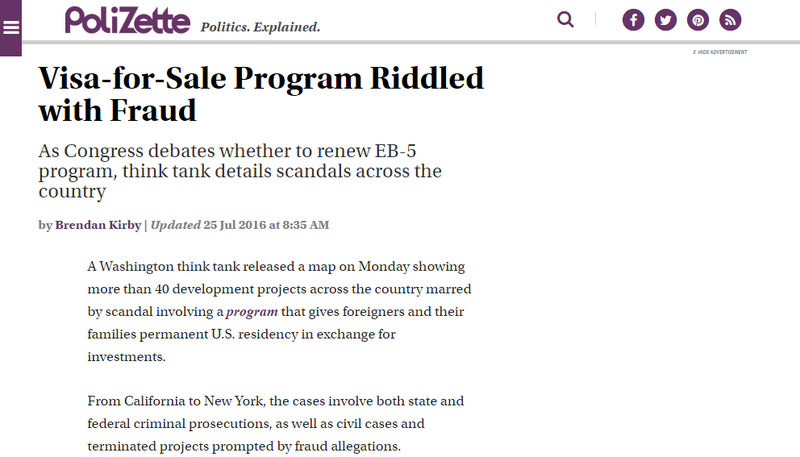 A Washington think tank released a map on Monday showing more than 40 development projects across the country marred by scandal involving a program that gives foreigners and their families permanent U.S. residency in exchange for investments.

From California to New York, the cases involve both state and federal criminal prosecutions, as well as civil cases and terminated projects prompted by fraud allegations.

The report by the Center for Immigration Studies comes as Congress debates whether to renew the EB-5 visa program, which is set to expire Sept. 28. The research by the think tank shows legal problems tied to the visa — ranging from a mysterious death in South Dakota to numerous fraud allegations included in criminal indictments and investor lawsuits.

“It shows the programs are subject to fraud in many parts of the country,” said Center for Immigration Studies Fellow David North, who has closely studied the program.

The visa law has two main provisions. The first grants permanent residency to any foreigner who buys or starts a business worth more than $1 million. But that provision, which is not set to expire, is rarely used. The more common provision, up for debate, allows residency in exchange for investing at least $500,000 in a development project that creates at least 10 jobs and meets certain other criteria.

The law is designed to attract foreign investment to projects that would revitalize economically distressed areas of the United States. But North said the rules for designating investment zones are lax. Often, he said, developers build hotels or other buildings in booming areas of a city and draw boundaries to include nearby impoverished areas that do not actually benefit from the projects.

"That's the gerrymandering," he said. "It should go."

North said the best action Congress could take would be to let the program expire. But he added that is unlikely.

"Congress, unfortunately, probably will extend it, probably for a short period of time," he said. "I hope they take the opportunity to reform it. The big banks are behind it … The program can be rewritten to make it tighter."

Whatever its merits, the program has proven popular with wealthy foreigners, especially the Chinese. The number of participants has hit the annual cap of 10,000 since 2014. North said that includes immediate family members of the investors — the total number of projects is about 3,500 each year.

Most of the enforcement actions undertaken by the government come in the form of investigations launched by the Securities and Exchange Commission, North said.

"If it weren't for the SEC, there would be no enforcement," he said.

If Congress must keep the program, North said, it ought to at least require more than a $500,000 investment.

"The price should rise," he said. "Maybe they should just run an auction. If we're going to sell visas, maybe we should get some more money out of it."