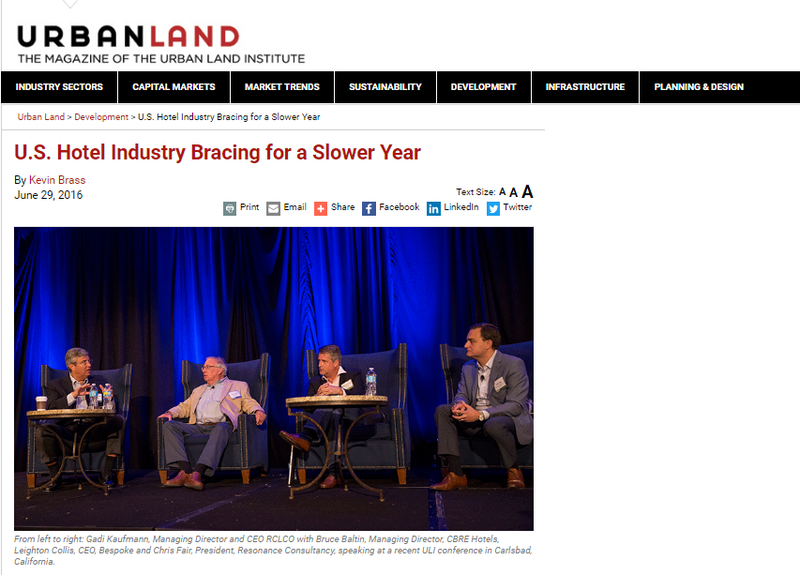 After years of steady growth, the hotel industry is bracing for a slower year.

“Growth and revenue are slowing down,” Bruce Baltin, managing director of CBRE Hotels, told executives and experts gathered for ULI’s “Hotel and Resort Development: Next Wave of Innovation” conference in La Costa, California, held June 20–22. “It’s hit a peak. We think we’re at a plateau.”

The first sector-specific conference created by ULI in seven years, the event convened industry leaders in the midst of uncertain times. In the wake of record development and acquisition activity in recent years, an abundance of supply, uncertainty in the economy, and global politics are likely to dampen development activity and revenue growth in many markets, executives agreed.

Revenue per available room (RevPAR) has been steadily growing at about 6 percent per annum in recent years, but growth is expected to fall to 3.5 to 4 percent this year, Baltin said.

Overall, an oversupply of rooms, rising construction and labor costs, and uncertainly about the long-term impact of Airbnb are among the issues making it increasingly difficult to finance projects, executives said. At the same, land prices in many areas have soared, said Kyle Jeffers, managing director of Acore Capital. “When paying for land today, the basis is probably too high,” Jeffers said.

At these levels, some deals are the result of what Kirkbride called the “schmuck factor”—investors paying too much for an asset.

While most industry metrics have returned or passed pre–Great Recession levels, the recovery has not been equal across sectors and regions, executives emphasized. While the occupancy rate at the national level is expected to hit an all-time high in 2016, CBRE Hotels forecasts that 29 of the 59 top U.S. markets will likely post declines in 2016, compared with only seven markets in 2015.

Beach resorts in the United States are performing much stronger than mountain and destination facilities, CBRE’s Baltin told the La Costa audience. At the beaches, occupancy was up to 72.1 percent in 2015, compared with 67.7 percent in 2007; RevPAR hit $191.88, compared with the prerecession level of $159.33, according to CBRE data. In contrast, RevPAR for mountain resorts increased only slightly, from $112.69 to $114.14 during the same period of 2007.

In a survey of wealthy consumers, 50 percent said their preferred second-home destination was near a beach, compared with only 14 percent for mountains and 10 percent in cities, said Chris Fair, president of Resonance Consultancy.

The most recent data show continued shifts in consumer habits. Urban resorts—in particular, in secondary cities such as Nashville and Austin—are luring an increasing number of vacation travelers and buyers of second homes, executives said.

In general, the second-home market—a component of most resort projects these days—remains strong, said Adam Ducker, managing director of RCLCO, the consultancy.

Resort markets have among the most “vibrant” economies among small markets in the United States, Ducker said.

In a sharing economy, fractional and shared-ownership projects remain a viable option, despite doubters, argued Thomas Christopoul, executive vice president of 54 Madison Partners, an investment firm. He has seen a growth in interest in “urban fractional” shared-ownership projects in cities around the United States. Inspirato, the luxury destination clubs, is one of the fastest-growing companies in the business, Fair noted.

While turbulent times may be ahead, the hotel market is expected to stabilize, more than decline, experts said. Several factors that are raising caution—Brexit, the Presidential election—might be temporary blips. Interest rates are expected to remain low for the near future.

“The economy isn’t as bad as people thought early in the year,” said Mark Lanspa, Wells Fargo executive vice president. “Now people are coming out from under shells.”

Demand is expected to remain high, even if there is an abundance of supply, Kirkbride said.

While deal flow may moderate, the “U.S. is still the most liquid country” in the world, he said.

Infill projects are another area of opportunity, said Gary Derck, CEO of Purgatory Resort. “Everybody is looking for a great infill site,” he said. But finding the right project is a challenge. “If it doesn’t have a unique storyline, don’t touch it,” he said.

The sessions prompted a wide range of questions from the audience, as well as lively discussions. One member of the audience asked about the impact of the EB-5 program, which offers the opportunity for a visa in exchange for an investment in a development project. Once thought to be an important driver for projects around the country, EB-5 is “not going as strong,” Christopoul said. “It is still a challenge to raise money in that category.”

But Chinese investment is continuing to play more of a role in deals around the country. The influence of the Chinese investors is “palpable,” Christopoul said.