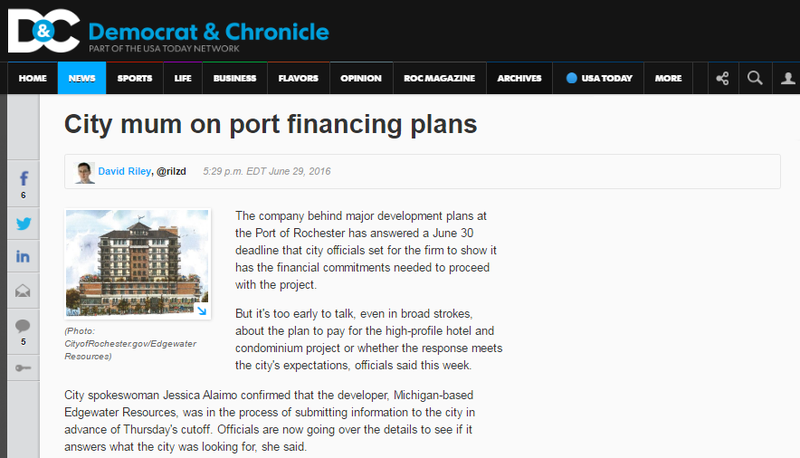 The company behind major development plans at the Port of Rochester has answered a June 30 deadline that city officials set for the firm to show it has the financial commitments needed to proceed with the project.

But it's too early to talk, even in broad strokes, about the plan to pay for the high-profile hotel and condominium project or whether the response meets the city's expectations, officials said this week.

City spokeswoman Jessica Alaimo confirmed that the developer, Michigan-based Edgewater Resources, was in the process of submitting information to the city in advance of Thursday's cutoff. Officials are now going over the details to see if it answers what the city was looking for, she said.

Alaimo couldn't say how long that review might take.

"We are unable to discuss the financial information as it is proprietary and under review," Alaimo wrote in response to questions about Edgewater's submission.

The first phase of the port development calls for a 69-room hotel, 27 condominiums, a spa, a restaurant and retail space on what is now a city-owned parking area at Lake Avenue and Corrigan Street.

The city also is in the process of reviewing Edgewater's plans for the site. Getting through the review process and nailing down financing could clear the way for a land sale agreement between Edgewater and the city — and then, construction.

City officials don't have to discuss the financing plan if they don't want to. But at the same time, there probably is no legal reason to withhold basic information, such as what percentage of money might come from which sources, said Robert Freeman, executive director of the state Committee on Open Government.

Some elements of Edgewater's submission might be justifiably withheld if it would cause injury to Edgewater's competitive position, Freeman said, but there's no need to withhold everything.

“Characterizing something as proprietary, it just doesn’t mean a damn thing,” said Freeman, whose office provides advice on freedom of information and public records issues.

More information will be available after the city's review is finished, Alaimo said.

The Democrat and Chronicle has filed an open records request for Edgewater's response to the city's deadline.

To date, Edgewater has been open about its financial plans.

From the outset, Edgewater made clear that it planned to fund the project through a mix of owner equity, bank financing and the EB-5 immigrant investor program. Overseen by U.S. Citizenship and Immigration Services, the EB-5 program allows foreign investors to obtain legal residence in the U.S. if they put money into development projects that create American jobs.

An Edgewater representative could not be reached for comment on Wednesday afternoon.

The port project has been controversial. City leaders have been looking for years for a project that could help transform the port into a more lively place. But critics, including the opposition group Charlotte Strong, have questioned whether the development is appropriate or will be successful.

At least one neighborhood leader was hoping for more information this week on Edgewater's plans.

"Bottom line, we need to know what’s going on with the project,” said Clare Stortini, who is president of the Charlotte Community Association and has been involved with Charlotte Strong.