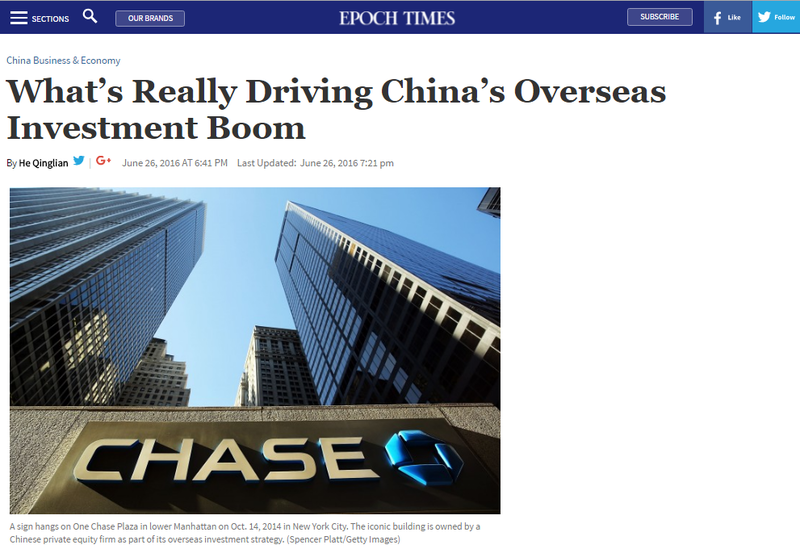 Over the past 20 years, investment has been one of China’s major economic strategies. Chinese overseas investment has grown extremely fast in recent years, reaching US$123.12 billion in 2015. By mid-April of 2016, another $110 billion has gone overseas. For foreign investors, however, China is no longer an attractive destination, and for Chinese, overseas investing is more about finding a safe haven than about seeking high returns.

The real reason behind Chinese capital outflows is to evade or minimize substantial losses in the economic downturn back home.

Since 2009 the vast majority of foreign investors in China have been downsizing, closing, and divesting. In the manufacturing city of Dongguan alone, 72,000 enterprises have closed down between 2008 and 2012. In 2014, at least 4,000 more businesses closed, and in October 2015, over 2,000 Taiwan-funded enterprises left Dongguan, leaving five million workers without jobs.

Foreign investment has withdrawn in different ways, but for only one reason: factories in China are no longer profitable. A while back, the American and EU Chambers of Commerce in China issued a report complaining about the deterioration of China’s investment environment. One complaint by the U.S. was that China had set “thresholds” to limit U.S. companies in China. These thresholds included the Chinese government launching a series of investigations into foreign companies and issuing the State Security Law to limit the use of foreign technologies, which seriously damaged the confidence of foreign companies. Both reports cited a long list of data illustrating their points.

As if to support these complaints, five prestigious global manufacturing companies announced plans to divest or exit from China in the last two days of May: Chicheng Communication, the world’s largest mobile phone metal cover processor; Dongguan Xinda, the manufacturer of London’s Olympic mascot; Triumph International, a well-known German company in Yancheng, Jiangsu Province; and a subsidiary of Philips lighting in Shenzhen.

The majority of Chinese overseas investment is made by state-owned enterprises. Although, according to some accounts, 90 percent of these investments have resulted in losses, it is the regime’s strategy to solve China’s high dependence on outside resources.

Chinese private capital has also been seeking out development projects and high profits in other countries. In 2011, private enterprises accounted for only 11 percent of Chinese overseas investment. But by 2015 it had risen to 41.2 percent. However, by taking a look at the projects and countries of investment, it becomes apparent that the main purpose for private Chinese capital going abroad is for hedging rather than industrial investment.

According to China Foreign Investment Market Report – 2015 Review, China’s overseas investment in real estate grew by 41.5 percent in 2015, to a record high of $21.37 billion. Malaysia absorbed the most land development investment capital from China, with about $2.52 billion, followed by Hong Kong, the United States, Australia, and Singapore.

In April of this year, Rhodium Group and the National Committee on U.S.-China Relations jointly issued the New Neighbors 2016 Update. The report notes that as of the end of 2015, the number of China-funded enterprises in the United States reached more than 1,900, spreading across 362 of the 435 congressional districts and directly employing approximately 90,000 full-time U.S. employees. Main investment areas are real estate, finance, technology, film and entertainment, and energy.

The report did not mention that there is a large number of investments made in connection with the EB-5 Immigrant Investor Program. For example, New York Observation Wheel projects were launched in 2014 with a total funding of $380 million, invested in by hundreds of Chinese.

The U.S. attracts the highest amount of Chinese capital, with lots of it flowing in through the EB-5 Immigrant Investor Program. By the end of third quarter 2015, the USCIS had approved 6,498 EB-5 applications, and the vast majority were Chinese investors.

We can conclude that the real purpose of Chinese capital outflows is hedging. If you think the above points are not strong enough, here is another piece of just-released news: China’s imports from Hong Kong in May increased 242 percent year-on-year. Those who are aware of China’s money laundering activities know that this import-export business is fictitious in order to move assets overseas.

But there are several reasons why the Chinese government cannot put restrictions on capital outflows. First, Beijing is still making efforts to attract foreign investment. It therefore cannot forbid money from going out. Second, those who have huge amounts of money to transfer are Communist Party insiders and their relatives. Thus, policymakers can only place restrictions in other areas, such as planning to collect financial transaction taxes to stabilize capital market volatility and prevent financial risks.

In summary, Chinese investment money flooding the world, instead of fueling the Chinese economy, is not doing as well as touted by Western media. There is bitterness and frustration piling up behind Beijing’s “going out” strategy.