Monterey Park has become a hub for Chinese tourists, and with it hotel development 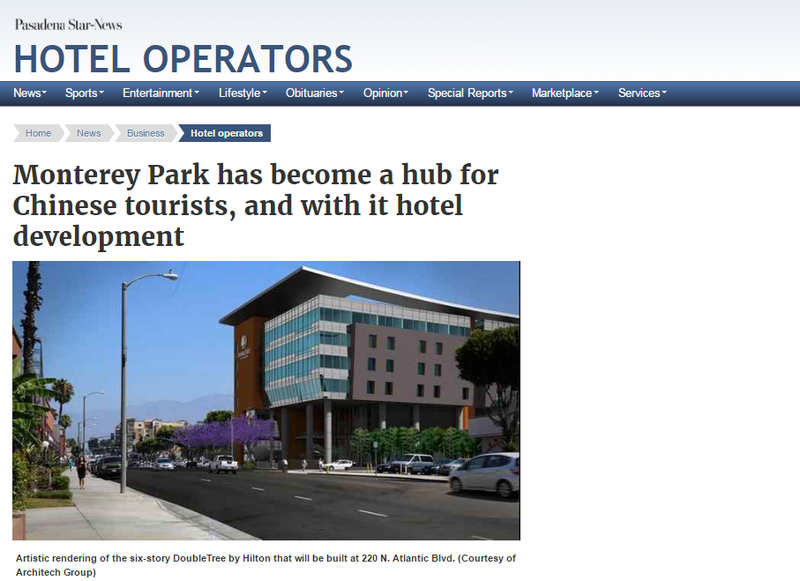 Monterey Park has become a new home base for Chinese tourists visiting Southern California, and now Chinese developers are trying to cash in.

Tourists come for a glimpse of Hollywood, but stay in the suburb for the familiar surroundings and food.

“Chinese immigrants continue to come in. The city has become very well known in China,” said Michael Huntley, the director of community and economic development in Monterey Park. “Visitors know that they will be able to find the traditional restaurants they like.”

Every year Chinese travelers spend on average $3,000 on trips to California, more than any other country’s visitors, according to the U.S. Office of Travel and Tourism Industries.

Well aware of the flow of tourism, Chinese investors are bringing in brand-name hotels like Courtyard by Marriott and DoubleTree by Hilton to Monterey Park.

“We continue to see Chinese investors coming to our city with the desire to invest millions of dollars in big long-term real estate projects,” Huntley said. “China’s economy is always in the back of our minds because they are investing in real estate, so their decisions could affect overall development.”

Set to open next year, the six-story Courtyard by Marriott is on Atlantic Boulevard and Hellman Avenue. It’s EB-5 project status allows foreign investors involved to be eligible to apply for permanent resident status.

Work on the hotel’s underground parking will begin toward the end of July. The hotel also will feature a pool, spa, outdoor seating and a shaded outdoor media and television lounge.

The six-story DoubleTree has been granted land use approvals, but developers have yet to submit construction drawings for the city to review. If built, the 180-room hotel will be located at 220 N. Atlantic Blvd. The project will include spaces for restaurants and retail stores, meeting rooms, fitness center and business center.

Aside from the two hotels, Chinese investors are pouring money into the city’s Town Centre development, a mixed-use project building 109 condominiums above spaces for stores.

Altogether, the projects are expected to create hundreds of jobs and generate about $2 million to $3 million every year in tax revenue for the city, officials said.

“The hotel projects are great for the city because they will bring in employment to our city in the future,” said Thomas Huang, a local business consultant and resident. “Not only that, but the growth of the tourism industry will boost other businesses in the area.”

Not all residents are happy with the recent boom in development across the city.

“The [Atlantic Times Square] outdoor mall already causes a disturbance with people drinking and disposing of their beverages on our streets,” said Nicholas Garcia, a 32-year-old resident living a street away from the future location of the Courtyard by Marriott. “Not to mention the lack of parking spots and traffic congestion we experience. I can’t imagine how bad it will get once the hotel is up and running.”

But City Manager Paul Talbot said the traffic generated by a hotel isn’t even comparable to what a chain restaurant would bring in.

“A hotel is one of the least amount of traffic generators,” he said. “None of these hotels have banquet space, so they create maybe 500 to 800 trips over a 24-hour period. Whereas at a fast-food restaurant, you could have a couple hundred per hour, so in terms of traffic and trips, the impact of a hotel is pretty low.”