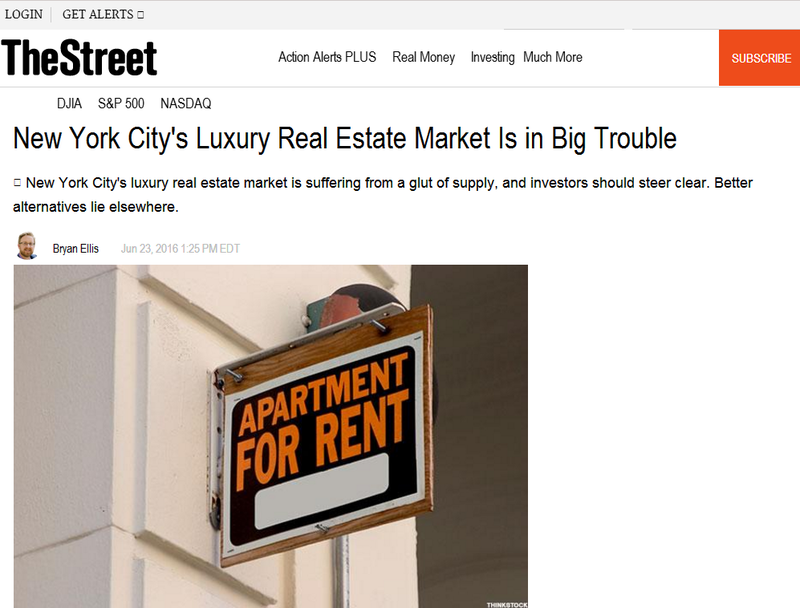 The elite sector of New York City property is taking a beating, and there's no end in sight. Olshan Realty reported last week that Manhattan recently saw a surge in sales of luxury properties priced at $4 million or higher, but there was a troubling reason: Sellers dropped their prices by an average of 11% after properties had sat on the market for an average of 311 days.

The trouble extends to new developments, as well. Extell Development has resorted to raising capital for its Central Park tower through the government's EB-5 program for its Central Park condominium tower, according to a report by The Real Deal. The EB-5 program provides permanent residency in the U.S. to foreign investors who put at least $500,000 into certain types of businesses. This move was seen as a matter of need rather than preference for Extell, and it appears the company wasn't able to obtain other forms of financing.

The pain is manifesting on Wall Street, too, as Equity Residential (EQR) , a real estate investment trust that is America's largest publicly traded multifamily landlord, was forced to cut full-year expectations for same-store revenue and net operating income. This was largely a function of a clear glut in supply of higher-end properties. In one of the year's most obvious understatements, COO David Santee in April commented that "there's some crazy stuff going on in New York."

The problem is simple: supply and demand. Since the Great Recession began easing, rental rates nationwide have skyrocketed as economic and demographic trends have driven home ownership rates to near historical lows. As a result, rental rates have boomed nationwide without pause. Data from the first quarter of 2016 show available units being offered at all-time high rental rates, with rates increasing at around 8% annually.

Big developers were quick to jump on this trend, and nowhere more than in New York's luxury market. Sometimes lacking judgment, but never lacking boldness, some New York City developers are beginning to realize a harsh truth of economics: If your prices are increasing faster than your customers' ability to buy, you'll soon have trouble.

That's precisely what's happening now. Though landlords have enjoyed the booming rental rates in New York and nationwide, the undeniable truth is that wages simply haven't kept up. National wage growth has hovered around the 2%-3% range for the past five years, far shy of the 8% growth rate in rents.

The solution for many individual investors has been to seek out direct real estate investment opportunities in markets that are, in every way, the opposite of New York City luxury real estate.

A great example of this is the current "darling" of individual investors, Birmingham, Ala. Birmingham offers an extraordinary fundamental picture for real estate investors, including:

The numbers are very favorable to investors. An investor deploying $500,000 -- such as those who might choose to fund Extell's skyrscraper through the EB-5 program -- could realistically expect to acquire eight to 10 fully renovated turn-key rental properties, and to enjoy a net yield of 10%-plus from cash flows.

Furthermore, by using the Housing Voucher Program offered through the city of Birmingham, investors receive their rental payments directly from the government, so rents are always paid on time and in full.

While it does appear that the new housing market faces strong headwinds, there continues to be extraordinary opportunity for savvy investors in strategic markets throughout the U.S., such as the one in Birmingham.