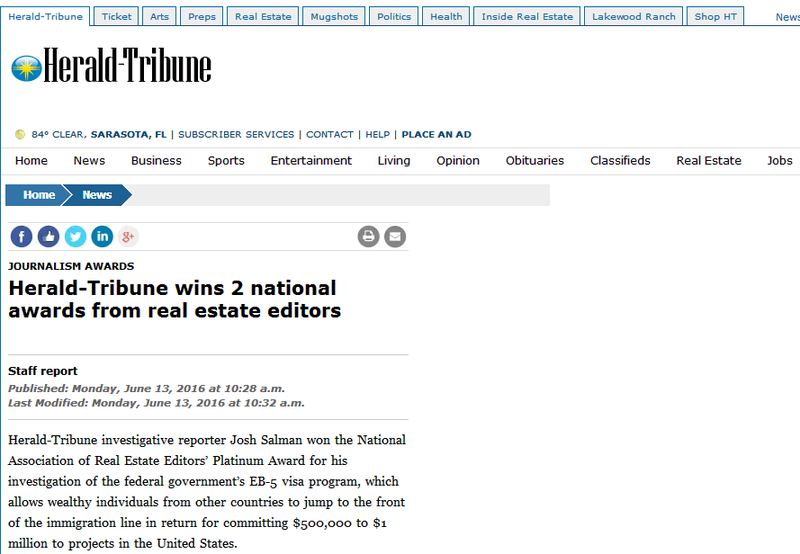 Herald-Tribune investigative reporter Josh Salman won the National Association of Real Estate Editors’ Platinum Award for his investigation of the federal government’s EB-5 visa program, which allows wealthy individuals from other countries to jump to the front of the immigration line in return for committing $500,000 to $1 million to projects in the United States.

A Department of Homeland Security audit has shown that EB-5 poses “national security threats that could harm the U.S.” But the program continues to grow faster than the government can keep up.

The award was handed out this weekend at a gathering of real estate editors and reporters from all over the country in New Orleans.

The judges said: “The reporter exposed a government program, known as the EB-5 visa, which was prone to international corruption. His investigation not only touched on real estate but matters of national security. Mining a treasure trove of 50 interviews, thousands of court cases, and property records, which resulted in building an impressive data base, the story led on the following day to a U.S. Securities and Exchange Commission announcement to crack down on EB-5 enforcement.”

Salman also was the Gold winner for “Best Small Daily Newspaper Story,” for his accounts of how property flippers resurfaced in Southwest Florida after the boom and after a project by the Herald-Tribune identified a ring of illegal players that was a finalist for the Pulitzer Prize and that lead to more than a dozen indictments.

The judges said: “Southwest Florida flippers, some operating illegally or questionably, are finding a way to make money. This reporter laid out a complicated process in a clear and concise story, based on the examination of more than 5,000 real estate records. A true public service, the story appealed to laymen with a glossary of terms.”