Project would give investors green cards 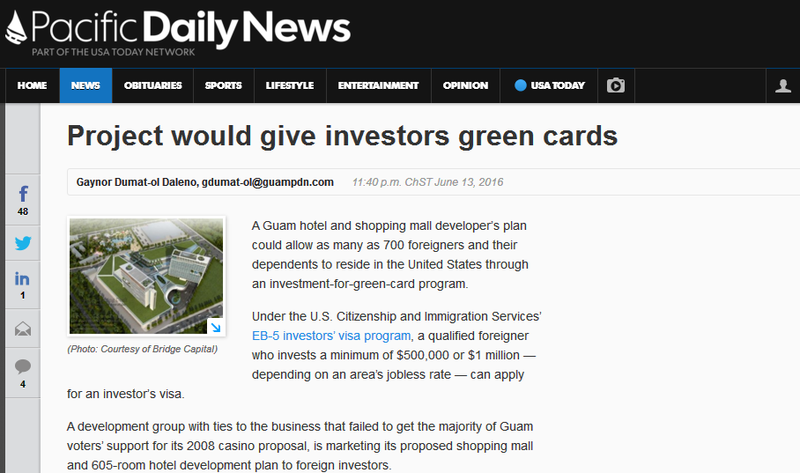 A Guam hotel and shopping mall developer’s plan could allow as many as 700 foreigners and their dependents to reside in the United States through an investment-for-green-card program.

Under the U.S. Citizenship and Immigration Services’ EB-5 investors’ visa program, a qualified foreigner who invests a minimum of $500,000 or $1 million — depending on an area’s jobless rate — can apply for an investor’s visa.

A development group with ties to the business that failed to get the majority of Guam voters’ support for its 2008 casino proposal, is marketing its proposed shopping mall and 605-room hotel development plan to foreign investors.

Bridge Immigration Investments LLC, a subsidiary of Saipan-based Bridge Capital LLC, promotes the investors’ visa program on its website as a way for foreigners to invest their money into the proposed $425 million development in Guam.

For a minimum investment of at least $500,000 each, 700 foreign investors can be part of the EB-5 program and co-own the development, according to the business’ website.

That number of foreigners investing $500,000 each comes up to $350 million, so Bridge Capital might need additional investments or to seek other funds if it were to fully fund the proposed $425 million project.

It’s unclear how many investors have actually signed up for the program and are being processed for investor visas.

When Bridge Capital LLC didn’t receive enough Guam voters’ support to convert its former Guam Greyhound Park in Tamuning into a casino, the dog racetrack closed. The site is located across the street from Tamuning Elementary, LBJ Elementary and near St. Anthony’s school and church.

The project proposes to develop the former racetrack with various amenities, including:

The property was publicly listed for sale for $15.9 million soon after the racetrack closed.

Guam Greyhound held a 55-year lease on the racetrack land and surrounding areas.

In April this year, Guam Greyhound assigned the property’s ground lease to an affiliate, Bridge Aina Le’a, a Hawaii limited liability company that proposed a housing development in Hawaii.

Bridge Capital has concentrated its growth in Asia and manages affiliated offices in Cambodia, Laos, Macau and Thailand, according to the company’s website www.bccnmi.com.

Bridge Capital also was part of a casino joint venture in Laos, but the company and its partners exited the market after a dispute with the Laos government over taxes and other issues.

The Lao People’s Democratic Republic had sued Bridge Capital in the District Court for the Northern Mariana Islands, in part to access Bridge Capital’s bank records.

U.S. District Court Magistrate Judge Heather Kennedy’s order on April 7 states the Laos government has agreed not to prosecute the investors under a settlement agreement. The settlement agreement called for Baldwin’s group to sell off their interest in the Laos casino, called Sagan Vegas, which they did, in exchange for the Laos government agreeing to stop pursuing prosecution of the investors, according to court documents.

The judge said the government of Laos “is a sovereign nation and may prosecute its laws and interpret its agreements as it sees fit,” but the federal court, she said, “is not required to help.”