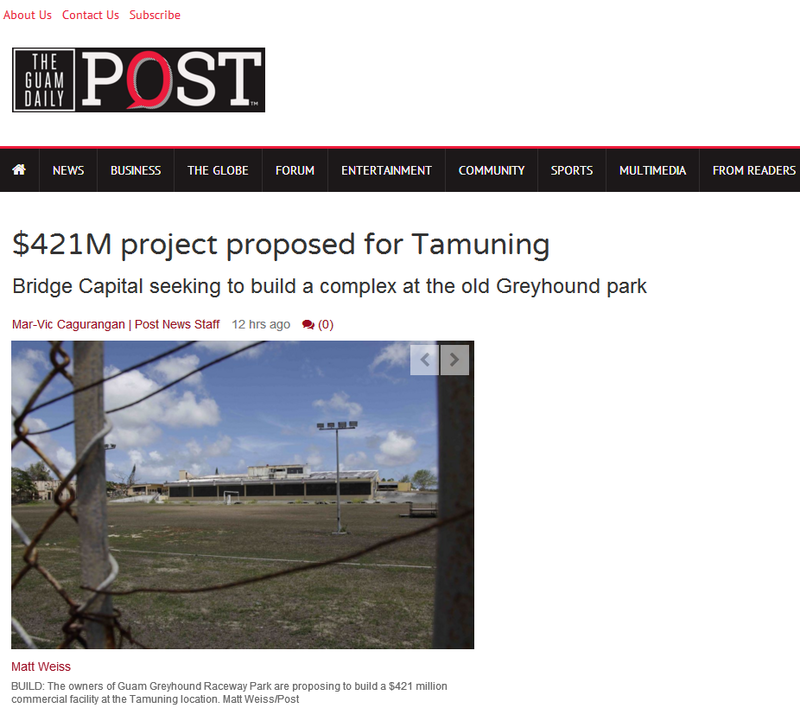 Bridge Capital LLC is proposing to develop a $421 million commercial facility, which includes twin towers with a total of 590 hotel rooms, at the former site of Guam Greyhound Raceway Park in Tamuning.

Based on the company’s conceptual plans, the integrated facility complex will also feature an upscale 800,000-square-foot retail establishment and a leisure park.

“We are very excited about this proposed project and believe it will provide a significant addition to the current retail and hospitality options in Guam,” said Philip James, asset director for Bridge Capital and CEO of Invest Guam Regional Center LLC.

James said the company plans to lure investors through the EB-5 visa program to meet its capital requirements for the project.

Bridge Capital has yet to file the papers with the Guam Land Use Commission, but James said Gov. Eddie Calvo gave a “positive” reaction to the proposal when the company presented the conceptual plans at Adelup on April 27.

Although project plans are still being finalized, the company targets a groundbreaking next year and anticipates the construction to be completed in two years.

Bridge Capital is owned by John Baldwin, a Saipan-based businessman who operated the Greyhound Park before it shut down in 2008. 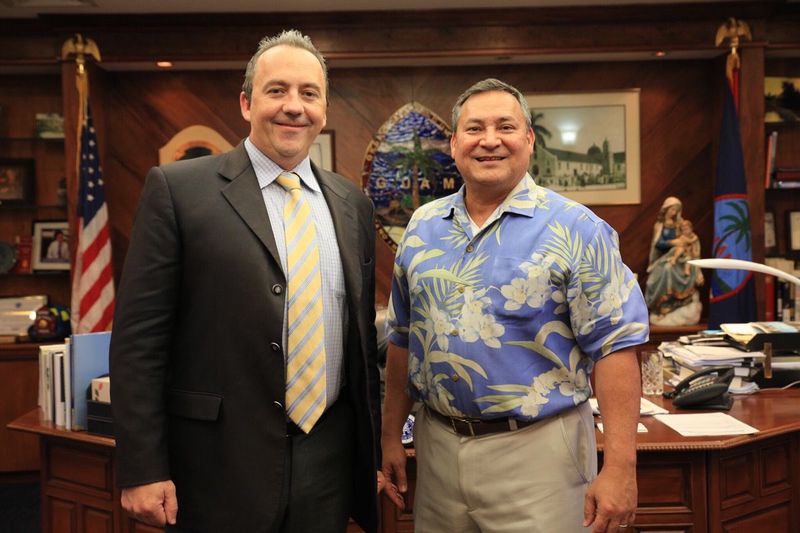 Philip James, left, asset director for Bridge Capital and CEO of Invest Guam Regional Center LLC, visits Gov. Eddie Calvo at the Governor's Complex at Adelup on April 27 to present the company's plans for a $421 million project at the Guam Greyhound Raceway park site in Tamuning.

Prior to the racetrack’s shutdown, Baldwin proposed an initiative that called for the legalization of casino gambling, with an accompanying plan to operate a gaming facility at the Tamuning park and an offer to give the government of Guam $100 million in gaming taxes in advance.

The controversial project did not materialize as Guam voters rejected the casino initiative. Baldwin’s repeated attempts to get casino operations legalized on Guam were defeated in succeeding plebiscites.

“While initially looking at alternative opportunities for the Greyhound site, we are extremely excited about our current plans to develop this property,” Baldwin said in a statement. “We have been operating in the region for nearly two decades and are very much committed to its development and believe this project will have a significant benefit to both the local Guam residents and inbound tourists.”

James said Bridge Capital is now preparing to discuss its conceptual plans with the relevant government agencies and to get feedback from the local community.

“The Guam Greyhound site is probably the largest undeveloped land plot in the Tamuning area and the proposed $421 million development project would become the second largest mall in Guam after Micronesia Mall,” he said.

James said Bridge Capital has yet to determine how many workers it will need to hire. “We have not completed this study yet,” he said.

With a rising trend of H-2 visa rejections by the U.S. Customs and Immigration Services, Bridge Capital, like other developers in the U.S., is likely to face difficulty in hiring foreign workers.

But James said the company is depending on its success with the investor visa program to overcome this challenge.

“If we raise funds through EB-5 program, then we have to create U.S. jobs anyway so this shouldn’t affect us albeit our labor costs might be higher,” he said.

Under the EB-5 visa program, permanent residency, or a "green card," is made available to foreign investors who contribute $500,000 or $1 million to qualifying projects. “The projects must ensure that for each investor, there are 10 U.S. jobs created in the local community,” James said.

Last year, Bridge Capital created Invest Guam Regional Center LLC when it also applied to USCIS for designation as a regional center for the EB-5 program for Guam.

“My main concern is using the EB-5 funds for capital stack,” James said. “The program is up for review in September and I am concerned that any major changes might make the program unworkable.”